Tulsa-based Chisholm Oil & Gas Operating LLC, stung by low oil and gas prices and operational issues, is seeking to restructure through a Chapter 11 filing, an avenue more Lower 48 operators are pursuing in the wake of Covid-19. 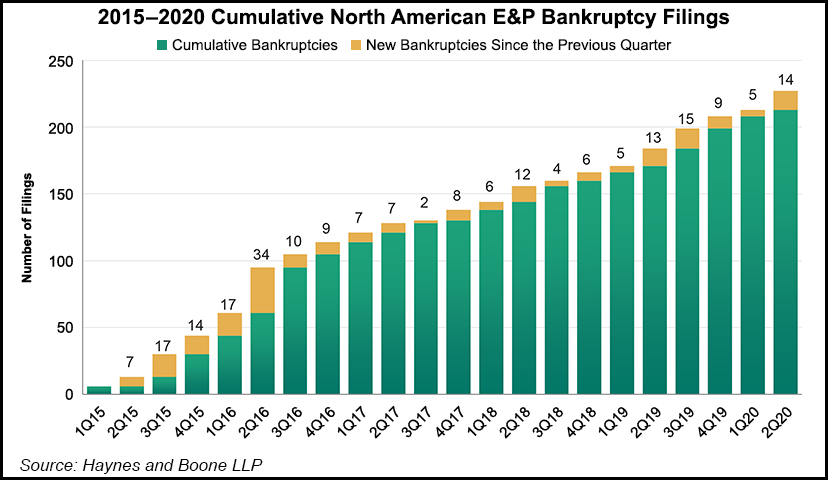 The exploration and production (E&P) company, supported by private equity giants Apollo Global Management LLC and Ares Management LLC, works in Oklahoma’s Sooner Trend of the Anadarko Basin in Canadian and Kingfisher counties, aka the STACK. It sought protection in U.S. Bankruptcy Court for the District of Delaware (No. 20-11593).

Last year, Chisholm took over Houston’s Gastar Exploration LLC, another Oklahoma-focused E&P, to build its pure-play status in the Midcontinent. Gastar ironically had emerged from bankruptcy earlier in 2019.

A “combination of operational issues and a decline in commodity prices pushed the company to evaluate options with respect to its current capital structure and diminishing near-term liquidity,” Chisholm’s court filing noted. Consequently, advisers were hired “to explore ways to inject new capital into the business and/or to restructure the company’s debt obligations.”

After considering the options and following discussions with key stakeholders, Chisholm’s management team decided the best path forward was through Chapter 11.

A restructuring support agreement with lenders now in place is expected to allow Chisholm to emerge from voluntary bankruptcy in about three months “as a stronger company and to continue as a going concern,” the court filing stated.

Chisholm holds about 152,000 net acres concentrated in Kingfisher County and employs 32 people and between 10 and 25 contractors, the filing noted. It also maintains operational control over 90% of its reserves, and it contracts with various third parties for producing at around 10% of its sites.

As of the Chapter 11 filing last Tuesday (June 16), 80% of the company’s horizontal wells were operating and 20% were capped “as a result of the economic and liquidity conditions,” it noted. During the restructuring, management expects to continue to “open wells until approximately 83% of the company’s horizontal wells are operational. Additionally, as of the petition date, the company is not engaged in any drilling activities, and does not anticipate engaging in any drilling activities” until it emerges from Chapter 11.

In addition to its oil and gas operations, Chisholm has saltwater disposal capabilities developed through subsidiary Cottonmouth SWD LLC, which currently are not in operation. Affiliate Chisholm Midstream LLC also holds a 35% equity stake in Great Salt Plains Midstream Holdings LLC, a midstream oil and gas gathering and transportation business that brings the E&P’s produced oil and gas to market.

In early June, Haynes and Boone LLC said 19 North American E&Ps had filed for bankruptcy protection since the start of the year, and it said it was “reasonable to expect” more companies would seek protection from creditors.

Other E&Ps and OFS operators are said to be at the tipping point, including Chesapeake Energy Corp.