Spire Inc. has requested FERC authorization to place into service its 400,000 Dth/d Spire STL Pipeline, which would tap into the Rockies Express Pipeline LLC (REX) to serve the St. Louis market. 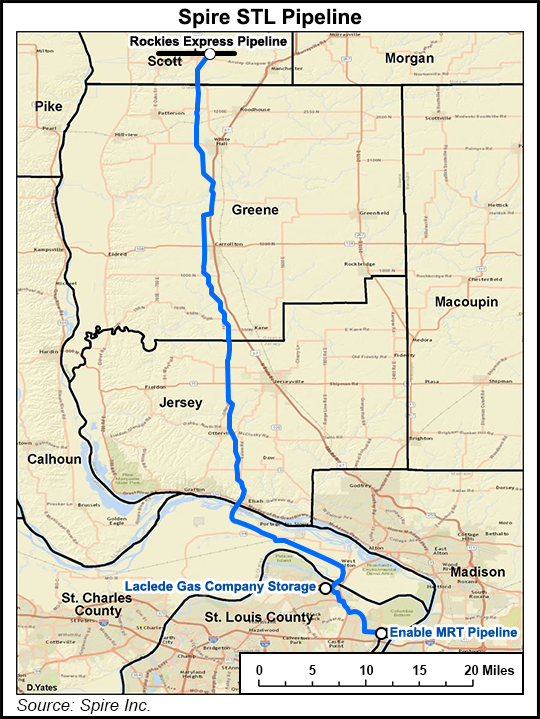 Spire’s plans include constructing 59 miles of 24-inch diameter pipeline, as well as acquiring and modifying seven miles of the existing Line 880 [CP17-40]. The $220 million project would interconnect with REX and run south through Illinois’ Scott, Greene and Jersey counties, as well as Missouri’s St. Charles and St. Louis counties. The company announced an open season for the Spire STL Pipeline in 2016.

Spire initially filed with the Federal Energy Regulatory Commission to build the project in February 2017. FERC granted a certificate for the project in August 2018 and authorized construction to begin last November.

In a letter to FERC last week, Spire requested authorization to place into service the 24-inch diameter North County Extension and the REX receipt station and two delivery stations. A portion of 24-inch diameter pipeline to the Mississippi River transmission interconnect would be built next spring, according to Spire.

The 1,713 mile REX system stretches from Ohio to Colorado and initially went into service in 2009. After later being modified to accommodate east-to-west flows, the pipeline has become a major takeaway route for production from the Marcellus and Utica shales.

REX’s total designed east-to-west capacity out of the Appalachian Basin currently stands at 2.96 Bcf/d and has been running at 95% usage, according to NGI‘s daily REX Zone 3 Tracker.