Despite challenges ahead, all the pieces are in place to build a robust petrochemical industry in the Appalachian Basin and strengthen the existing chemical manufacturing base in and around the region, speakers at a recent industry conference argued. 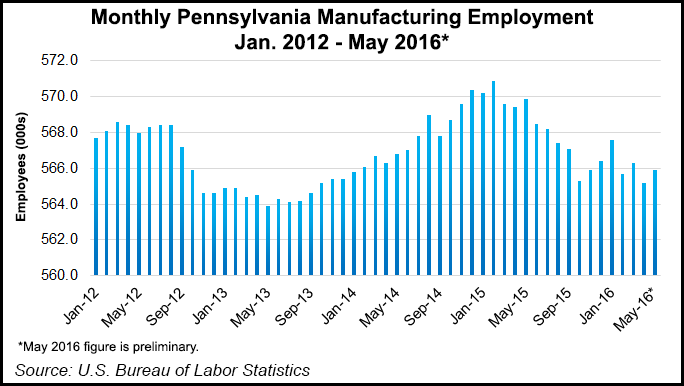 Royal Dutch Shell plc’s plans to move forward with a multi-billion ethane cracker in Western Pennsylvania that’s expected to create 600 permanent jobs and another 6,000 during construction in the coming years have economic development, state and industry officials pushing ahead with efforts to capitalize on the long-awaited opportunity (see Shale Daily, June 7).

“As economic development folks, we compete all the time, we’re always looking for the guy that’s going to invest in our state, build a factory, employ a lot people and spend a lot of money in our state. And that’s really good when you’re working toward a facility, a building, but there really isn’t much after that that isn’t regional,” Secretary of the West Virginia Department of Commerce Keith Burdette told attendees at the first Northeast U.S. & Canada Petrochemical Construction Conference.

“The competition is pretty much over. It’s over…We’re not trying to build a facility anymore, we’re trying to build an industry,” he added. “We make perfect sense, the opportunity to extract or process [natural gas], manufacture with it and sell it within the same basic area of the country is real and significant.”

Worldwide demand in the industrial sector is poised to grow by 30% by 2040, according to ExxonMobil Corp. Senior Technology Adviser Tahmid Mizan, who reviewed the company’s Outlook for Energy report at the conference. Chemicals are the fastest growing segment of industrial demand, given that this part of the sector is projected to use the most fuel and feedstocks. In all, Mizan said, natural gas liquids (NGL) demand is projected to reach 112 million b/d by 2040.

Hearing from some speakers at the conference, it would seem as though the Northeast market is preparing for a petrochemical industry war with the Gulf Coast, but both have distinctive advantages and unique opportunities, others said. Mike Devanney, a retired petrochemical executive that worked in Appalachia, said there are about eight similar facilities either under construction or announced, mostly in Texas, that are scheduled to come on stream before Shell’s Northeast cracker does in the early 2020s. Another seven are planned to come online at about the same time or after next decade.

While the Gulf Coast has an established industry with the customers, skilled labor and know-how that provides for lower construction costs, Devanney said, the Northeast is poised to benefit from cost-advantaged feedstock and a domestic market for polyethylene sales to converters that is primarily located within 700 miles of the region. Challenges remain, however, in building a customer base and keeping raw material in the region.

“Many think that this would be a natural advantage for all these crackers and polyethylene units, where they can enjoy lower railcar freight and faster delivery to their customer base,” Devanney said of the Northeast market. “Nevertheless, some of the new companies are not particularly familiar with the intricacies of supplying the U.S. polyethylene converters. They don’t yet have that long-term relationship, nor the broad product line bundles necessary to build and hold that sales base.”

Two other crackers have been proposed by PTT Global Chemical pcl in Belmont County, OH, and by Braskem SA in Wood County, WV (see Shale Daily, Sept. 3, 2015; Nov. 14, 2013). Those companies are still deciding whether to build those facilities, but several panelists agreed that many of the foreign companies preparing to build such plants in the Northeast and along the Gulf Coast are likely to export large volumes of polyethylene and ethylene. Devanney said four million metric tons are headed for export in the first new wave of development in the coming years, with just as much or more expected in the second wave next decade.

But state officials said they’re doing everything they can to get more money for workforce development and site preparation for additional facilities in the region.

Last year, Ohio, Pennsylvania and West Virginia signed a three-year cooperative agreement aimed at creating policies that would promote the region’s prolific shale plays to help generate more economic opportunities (see Shale Daily, Oct. 14, 2015). That effort, state officials at the conference said, is essential going forward in order to help the Appalachian Basin compete with the Gulf Coast. The agreement, Burdette added, is also likely to be bolstered with the possible addition of Kentucky, where Rogersville Shale development has just started and oil and gas volumes have grown in the Berea Sandstone in recent years.

Last month, a group of business leaders in the tri-state region launched another economic development initiative to attract global attention and top energy-consuming businesses to the Mid-Ohio Valley (see Shale Daily, June 9). Philadelphia officials added at the conference that several sites in and around the city are being considered for the petrochemical, storage, refining and other energy-related sectors. Sunoco Logistics Partners LP also has talked in the past about how it could take advantage of its planned Mariner East 2 NGL pipeline to utilize feedstock for a possible propane cracker at its Marcus Hook Industrial Complex near Philadelphia.

The American Chemistry Council said early last month that 262 chemical industry projects valued at $161 billion are completed, under construction or planned for the United States. The new factories and capacity expansions could create $105 billion in annual chemical industry output and 738,000 permanent jobs throughout the country by 2023.

ACC Chief Economist Kevin Swift said at the Pittsburgh conference that the economic impact of announced chemical investments in the Ohio Valley — a region near the Ohio River that includes West Virginia, Pennsylvania and Ohio, among others — would create 8,000 jobs and $11.1 billion in economic output.

“In the long-term horizon, there’s enough ethane supply in this country for all the crackers that have been planned or proposed and for the exports that are going to be happening,” Swift said. “There’s a lot of ethane, it’s a great thing; it’s a good thing.”