Southwestern Energy Co. said Thursday it is actively pursuing strategic alternatives for legacy Fayetteville Shale assets in Arkansas in an ongoing push to stabilize finances and optimize its operations in the Appalachian Basin. 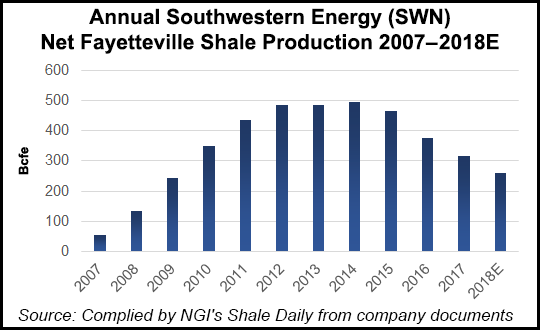 Calling it the next step to build on strategic cost-cutting actions that began two years ago after a buying spree and the commodities downturn, Southwestern management said it wants to “reposition its portfolio.” Any funds realized would go to shareholders, debt reduction or be pumped back into Appalachia.

The announcement could signal the beginnings of an exit from the Fayetteville, which built Southwestern’s brand as an unconventional explorer and where it remains the dominant player. The Houston-based independent lays claim to the first successful natural gas production from the formation. It spent $11 million for 343,000 acres in 2003, marking the beginnings of the play. The company most recently had more than 800,000 acres amassed in the Fayetteville.

However, production has been on the decline as costs have risen and gas prices have fallen. Southwestern reached an agreement with Boardwalk Pipeline Partners LP in late 2017 to restructure firm transportation agreements in the play to reduce excess capacity.

Southwestern also said Thursday it produced 897 Bcfe in 2017, versus 875 Bcfe in 2016. While year/year Appalachian production increased from 498 Bcfe to 578 Bcfe, Fayetteville production declined to 316 Bcf from 375 Bcf.

The company has been testing the Moorefield Shale, which sits below the Fayetteville, to help reverse declining volumes in Arkansas. Southwestern is continuing to monitor the results from those wells and test other redevelopment concepts, but it has allocated little to the play in its 2018 budget.

Capital investments have been set at $1.15-1.25 billion this year, or about 2% lower than the midpoint of last year’s guidance. While the company has budgeted up to $870 million in discretionary capital for both its northeast and southwest Appalachian operations, it’s set aside only $15-25 million for the Fayetteville, down from a budget of more than $100 million in 2017.

Overall, Southwestern’s 2018 capital plan includes $815 million for drilling and completion activities, $230 million for capitalized interest and expenses, $75 million for water infrastructure and $95 million for land costs. The budget is focused mostly on the Appalachian Basin, where four rigs are set to run with three completion crews in the southwest part of the basin. Two rigs and two completion crews also would be working in northeast Appalachia.

The bulk of Appalachian spending is for the southwest part of the basin, where the company is guiding toward 30% year/year production growth. Given commodity prices, Southwestern said it plans to target the liquids-rich portion of the play, which should account for more than half of this year’s overall production, the company said.

The company has again committed to fund its entire 2018 program within cash flow. Southwestern is one of the final Appalachian-focused producers to release spending plans for this year. According to NGI’s Shale Daily calculations and company reports of eight other key Northeast producers, the group is showing capital restraint.

Combined capital expenditures across the basin are expected to be down 2% this year versus last. That’s compared to the combined 10% spending increase that other U.S. exploration and production companies have so far reported this year.