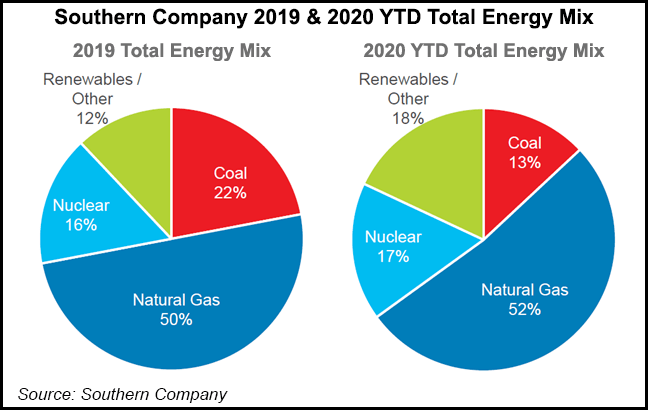 Southern and its subsidiaries, which serve nine million customers in six states, reaffirmed an intermediate goal of 50% reduction in GHG emissions from 2007 levels by 2030.

“Driven primarily by low natural gas prices, and through our regulators, Southern Company has seen a rapid transition of its system’s generation fleet,” the firm said. The system’s carbon emissions decreased by 44% through 2019, “and the company now expects to achieve the 50% reduction goal well in advance of 2030, and possibly as early as 2025.”

To achieve the net zero goal, the plan is to continue to reduce emissions and improve energy efficiency, as well as incorporating negative carbon solutions such as direct air capture of carbon and natural methods such as afforestation.

As You Sow, a shareholder advocacy nonprofit, praised the net-zero objective as an improvement on previous goals.

“We commend Southern for committing to net-zero emissions and look forward to more clarity on how it will achieve this new target, especially with regard to its large natural gas fleet,” said As You Sow’s Lila Holzman, energy program manager.

“Shareholders are increasingly concerned that utilities may experience stranded assets and early retirements of natural gas infrastructure similar to what we’ve seen with coal-fired assets. Southern must clarify how it will avoid this as it works to achieve its climate target.”

The Energy Information Administration on Thursday said renewable energy consumption surpassed coal in 2019 for the first time in modern history.

Oil and gas majors such as Chevron Corp. and ExxonMobil, as well as financial institutions such as Barclays plc and JPMorgan Chase & Co., also have faced increasing pressure from shareholders to align their portfolios with the goals of the Paris climate accord.