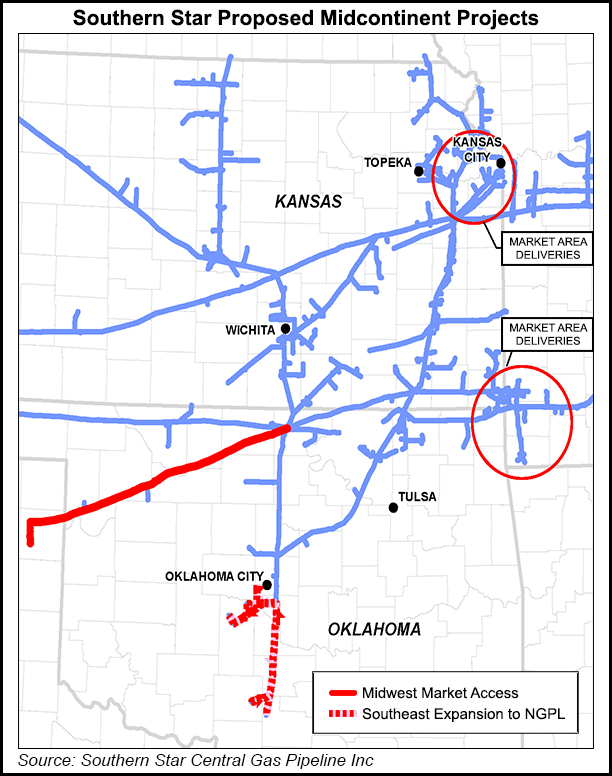 Owensboro, KY-based Southern Star said its proposed Midwest Market Access and Southeast Expansion to NGPL project would serve growing production in the SCOOP (aka the South Central Oklahoma Oil Province) and STACK (the Sooner Trend of the Anadarko Basin, mostly in Canadian and Kingfisher counties) plays.

The Southeast Expansion to NGPL project would expand capacity of the recently installed NGPL Carter interconnect between Southern Star and NGPL, allowing the growing SCOOP and STACK production plays more access through Southern Star to TexOk markets in NGPL’s Segment 15. The expansion could provide up to 40,000 Dth/d of additional capacity.

Southern Star said it would accept nonbinding service requests through 4 p.m. CT on Jan. 31. Additional information on the projects may be obtained by contacting Robbie Clark at (270) 852-4577 or Chad Priar at (270) 852-4558. Open season information is also available on the company’s website under the “Notices-Non-Critical” tab in informational postings.

“The nonbinding bid(s) received during this open season will assist Southern Star in determining whether to pursue the proposed expansion and in defining the final parameters of such expansion,” the company said. “If it decides to move forward after evaluating the bids, Southern Star will, subject to FERC approval, install the necessary facilities to serve all or a portion of the requested capacity.”

Both projects would be developed using a gas tariff approved by the Federal Energy Regulatory Commission, Southern Star said.

Southern Star has about 5,800 miles of natural gas transmission pipeline, mostly in the Rockies and the Midcontinent. Its system has 2.4 Bcf/d of design capacity, 46.7 Bcf of seasonal storage and serves markets in Colorado, Kansas, Missouri, Nebraska, Oklahoma, Texas and Wyoming. Meanwhile, NGPL is jointly owned by Kinder Morgan, Inc. (KMI) and Brookfield Infrastructure Partners LP, and is operated by KMI.