The U.S. Bureau of Land Management (BLM) took preliminary steps Wednesday that could lead to the leasing of heretofore untouched federal forest lands in south-central Utah for possible oil and natural gas exploration. The appeal period for the action ends March 25. 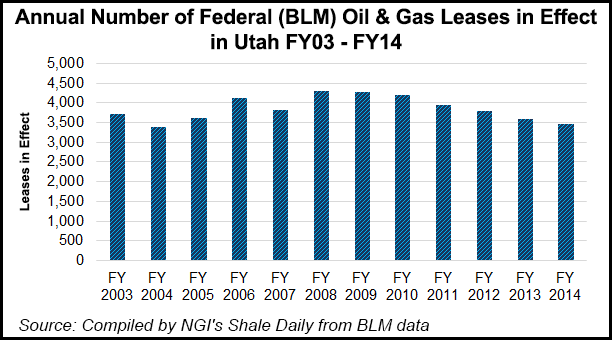 Before BLM can proceed, it must obtain consent from the U.S. Forest Service (USFS) for specific pieces of acreage in the Fishlake National Forest, an official in a Salt Lake City BLM office told NGI‘s Shale Daily.

BLM’s Utah office has decided to adopt the final environmental impact statement (EIS) and record of decision (ROD) by the USFS for oil/gas leasing on lands administered by the Fishlake National Forest. There is no timetable to include the area in a future BLM quarterly lease sale, the BLM official said.

If a lease sale is launched, it could be administered by the Color County BLM district and its Richfield field office. The office oversees south-central Utah, which has had some exploratory drilling, but generally no oil/gas development, the BLM official said.

USFS and BLM share responsibilities for the issuance and administration of oil/gas leases, with BLM being responsible for the selling and issuing of leases on National Forest System lands, but only with the consent of USFS.

Earlier, BLM Utah officials said the agency would like to target parts of the Fishlake lands for leasing, but so far USFS has not given consent on any of the proposed acreage.

For a number of years, Utah Gov. Gary Herbert has encouraged more oil/gas development in his historically coal-dominated state, and last fall he advocated that states get primacy in managing oil/gas production on federal lands (see Shale Daily, Oct. 30, 2014).

Herbert has argued that the states know their lands the best and they need to have a say on energy programs on federal lands. Herbert has lobbied the U.S. Congress, U.S. Department of the Interior and BLM to establish a process for delegating primacy to the states for regulating oil and gas operations on federal public lands.

BLM reiterated that its adoption of the USFS EIS and ROD is not an authorization at this point. “The BLM can now use the USFS’s analysis and determinations when making future decisions about lands proposed for oil/gas leasing on forest lands,” BLM said.