As West Virginia endured severe flooding that claimed the lives of as many as 23 people last week, some midstream natural gas operations in the state were affected as well. 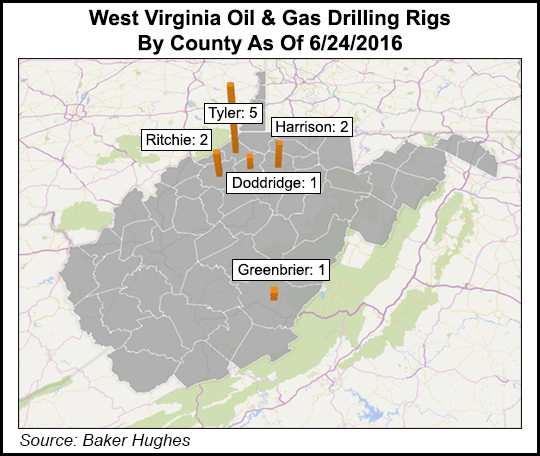 About 66,000 were still without power as of late last week, and natural gas service had to be cut off to 1,500 customers in Greenbrier County, Tomblin said.

The flooding was worst in the south central part of the state, with Greenbrier, Nicholas, Kanawha and Webster counties the hardest hit, the governor said, though he added that “the damage is widespread and devastating.”

TCO estimated in a Monday informational posting to customers that the disruption could last three to five weeks.

Dominion Transmission Inc. (DTI) notified customers last week of an unplanned outage at its Cornwell Broadrun Station, located near Clendenin, WV, in Kanawha County, due to “a severe weather event.” Deliveries to the Cornwell Broadrun station were limited to primary only starting last Friday and continuing until further notice.

Dominion spokesman Frank Mack told NGI’s Shale Daily Monday that the Cornwell Broadrun Station outage was the only impact to DTI’s system from the storm and that “all Dominion employees and their families are safe and secure.”

“…Our thoughts and prayers go out to those families who have been severely impacted from this devastating storm,” Mack said. “Dominion Transmission began reaching out to the local community, with employees loading trucks with water, non-perishable food and cleaning supplies, and distributing them to families living near Cornwell Station.

“DTI’s operations and government affairs departments are working with the local community to support their needs. Operations is mobilizing equipment and crews to assist with the cleanup in the community. We expect to soon announce additional measures to support our local communities who were hit hard from this traumatic event.”

“MarkWest experienced a slip on a pipeline right of way several miles north of the company’s Sherwood processing facility in Doddridge County, WV,” Hawkins said. “There was no loss of product along the line nor were there any public or environmental or safety related issues. Out of an abundance of caution, however, operations at the Sherwood facility have been temporarily curtailed as the situation is further evaluated and proactively addressed.”

A spokesman for Kinder Morgan Inc. said this week that there had been “no reports of any issues” with Tennessee Gas Pipeline Co.’s system as a result of the flooding.

According to last week’s Baker Hughes Inc. tally (see Daily GPI, June 24), most of West Virginia’s 11 rigs were concentrated in the north-central part of the state in Tyler, Wetzel, Doddridge, Ritchie and Harrison counties — somewhat removed from the area where the most severe flood damage was reported. One directional rig was operating in Greenbrier County as of last week, according to Baker Hughes data.