The Weekly Spot Gas Average for the shortened trading week ended Oct. 30 added a modest 7 cents, but had it not been for losses of a few pennies in Texas and Louisiana, the average could have been a dime or more higher. Nationally, the NGI Average rose to $3.36, but was unable to keep pace with an exuberant futures market which managed nearly double the gains. 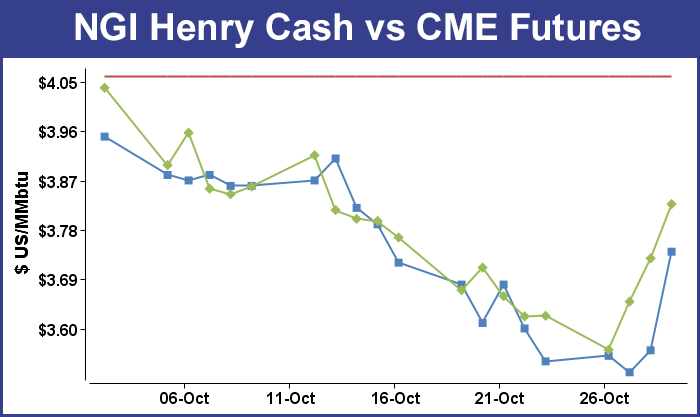 Of the market points followed by NGI, the week’s greatest gainer was the Algonquin Citygates with a rise of 72 cents to $3.42. The greatest loser was gas traded at Perryville dropping 12 cents to $3.51.

November futures settled Wednesday at $3.728, down 25.6 cents from the October contract settlement.

The storage report Thursday was greeted with something of a yawn as the build of 87 Bcf was only a whisker above expectations. The EIA (Energy Information Administration) inventory report did give the market data to finish up traditional end-of-season estimates of supplies heading into the upcoming heating season. But indications are that “traditional” may extend well into November, thus crimping the amount of gas normally withdrawn and continuing to shave molecules off the historical deficits. The deficits did take a hit as last year 45 Bcf was injected and the five-year average stands at 59 Bcf.

For the week ended Oct. 24 estimates were considerably larger. IAF Advisors of Houston calculated an increase of 87 Bcf, and a Reuters survey of 23 traders and analysts revealed an average 85 Bcf with a range of 77-93 Bcf. Tim Evans of Citi Futures Perspective was looking for a build of 83 Bcf and sees the five-year deficit under 200 Bcf in a few weeks.

“Our own forecast is only slightly less bearish, with a projected 83 Bcf build for last week and above-average injections also expected to continue,” said Evans.

By Nov. 14, Evans figures that injections will still be humming along at a 46 Bcf pace with the year-on-five-year deficit down to 187 Bcf. “In contrast with this bearish storage trend, Tuesday’s upturn in price suggests the market may have become at least temporarily undervalued, with prices trading at a discount to a year ago even with inventories that are still tighter year on year. It will take more of a recovery to establish that a lasting floor is in place, but with heating demand set to rise in the months ahead, we do see it as a possibility,” he said.

“We were looking for 85 to 87 Bcf, and the market didn’t make new highs or new lows after the number,” said a New York floor trader shortly after the report was released. “The high was $3.836 which stood and the low was $3.768. It was pretty much a non-event.”

Randy Ollenberger, an analyst at BMO Nesbitt Burns, said the firm “believe[s] the injection report will be viewed as slightly negative given that it was above expectations. The natural gas market is clearly comfortable with current storage levels for the upcoming winter heating season given the continued growth in the Marcellus and associated gas production. We believe natural gas prices are likely to drift until winter weather arrives.”

“The EIA reported an injection of 87 Bcf versus market consensus of 85 Bcf for the past week. This mildly bearish report pushed the market down slightly as it was up prior to the release of the storage report,” said Phillip Golden, director of risk and product management at Energy Market Exchange in Houston. “With forecasts already calling for cooler weather in the coming weeks, the market has returned to a slightly upward position and looks likely to push upward again today.”

Golden noted that natural gas market bulls might be corralling for a run. “The November natural gas contract closed up yesterday, rallying to $3.728/MMBtu, which represented a decline of 7.5% since the November 2014 natural gas contract became the prompt month contract on September 26. With mercury falling as we move towards winter, however, the market is poised for a rally, meaning that clients need to be ready to take advantage of market dips as they occur.”

Inventories now stand at 3,480 Bcf and are 294 Bcf less than last year and 310 Bcf below the five-year average. In the East Region 41 Bcf was injected and the West Region saw inventories increase by 8 Bcf. Stocks in the Producing Region rose by 38 Bcf.

Thursday’s futures trading saw the third gain in as many days as December finished at $3.827, up 3.9 cents, but in spite of the day’s gains analysts are revising downward their longer term price forecasts. “The prospect of high end-of-winter stock levels are likely to pressure prices toward new lows next spring. Accordingly, we have front-loaded downward revisions with delivered gas prices in 2015 now expected to average $3.75/MMBtu versus $3.90 previously foretold in early August,” said Teri Viswanath, director of natural gas strategy at BNP Paribas.

“Despite the looming y/y shortfall in end-of-summer inventories, more supply will become available this winter to meet peak heating demand requirements. Thanks to nearly a dozen new pipeline expansions, focused on removing bottlenecks in the Marcellus region, consumers could potentially access up to 2 Bcf/d of additional supplies over the next few months. What’s more, without significant weather-related demand, the surge in production is likely to overwhelm structural demand growth, possibly shifting the current year-on-year storage deficit to surplus before year-end,” she said in a report to clients.

Physical gas traders Thursday didn’t have to anticipate the Energy Information Administration (EIA) storage figures to initiate their buying. Forecasts of cold and snow at eastern points were enough to bring buyers off the bench, and only a handful of locations failed to post double-digit gains.

Gains of a dime or more were common at most locations, and the overall National market advance was 13 cents. The EIA reported an inventory increase of 87 Bcf, only slightly more than expectations, and prices made a nominal gain on the day. The close of futures trading was delayed about 10 minutes for no apparent reason, and when the dust settled futures had made their third advance in as many days. December settled at $3.827, up 3.9 cents, and January finished at $3.906, 3.5 cents higher. December crude oil fell $1.08 to $81.12/bbl.

Eastern points posted strong gains ahead of expected cold and snow. AccuWeather.com meteorologists reported that “a storm riding a blast of cold air will unleash heavy snow on the central and southern Appalachians Saturday and will turn toward part of New England by Sunday.” It added that major cities along the I-95 corridor could face gusty winds with flight delays in Washington, DC, Philadelphia, New York and Boston.

“After bringing some of the first snowflakes of the season to areas from Detroit to Cleveland and Pittsburgh on Halloween evening, the storm will dive southward on Saturday [and] accumulating snow is in store for the mountains from southwestern Pennsylvania to northern Georgia.” According to AccuWeather Chief Meteorologist Elliot Abrams, “the highest elevations of West Virginia could pick up a foot of snow. Power outages are also possible in parts of the central and southern Appalachians as the weight of snow may bring down trees limbs and power lines. The risk will be highest for power outages as gusty winds accompany a push of cold air during and after the storm.

“For some areas in the central Appalachians forecast to be hit with heavy snow with the storm this weekend, the last major early season storm to bring heavy snow was from Sandy in 2012,” Abrams said.

In the Marcellus and Appalachian regions, prices were mostly firm. Next-day gas on Millennium gained 6 cents to $2.40, and deliveries to Transco Leidy were seen 7 cents higher at $2.48. Packages on Dominion South rose 11 cents to $2.56, but deliveries to Tennessee Zone 4 Marcellus was flat at $2.15.

Power prices and forecast loads were mostly steady to lower for Friday across the broad PJM footprint. IntercontinentalExchange reported peak power for delivery Friday to the PJM West terminal rose 42 cents to $45.15/MWh. The PJM Interconnection forecast that peak power Thursday of 32,332 MW would ease to 31,479 MW Friday before tailing off for the weekend at 29,519 MW Saturday.

Natgasweather.com sees periodic cold episodes in the near term similar to what is hitting the East. “However, there’s a lot of variability and the weather models are struggling with the pattern after the middle of next week. What also remains problematic is there will periods of very comfortable temperatures in between these fast-moving chilly weather systems, each providing several days of pleasant temperatures, such as early next week, which will limit the amount of heating demand needed,” the company said in a Thursday morning report.