Sempra Energy’s Southern California Gas Co. (SoCalGas) on Thursday said it would partner with utilities in Canada and France to advance research on renewable natural gas (RNG) or biomethane. 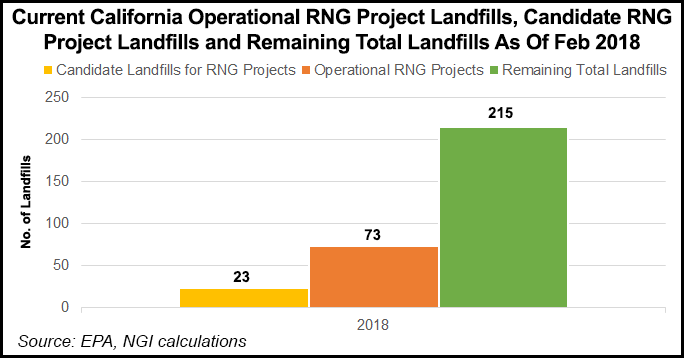 At the World Gas Conference (WGC) in Washington, DC, SoCalGas said it would collaborate with Quebec-based Energir, a gas distribution utility, and France’s GRDF and GRTza, which are gas transmission network managers.

Project results would be shared over the next year to identify “potential successes and challenges.” Representatives from each entity plan “to maintain an open dialogue” around the biomethane and power-to-gas technologies, striving for continued development and distribution of RNG and the advancement of climate goals, said a SoCalGas spokesperson.

SoCalGas Vice President Sharon Tomkins, who handles customer solutions and strategy, said she hoped the collaboration can “speed up the development of the next generation of innovations, including RNG, solar-powered hydrogen generation, fuel cells, power-to-gas and other technologies.”

Energir Senior Vice President Martin Imbleau said in the ongoing “transition era,” RNG would be a “powerful tool” to help mitigate the impacts of climate change.

“The development of RNG is a real challenge for the energy transition and has a key role to play in the context of a low-carbon strategy,” said GRDF’s Christophe Wagner, international director. He noted that multi-country utility agreement at the WGC was symbolic.

“It reflects our shared desire to develop green gas and other technologies.” he said. “This sharing of knowledge and experience at the international level aims to effectively meet the need for anaerobic digestion in line with the ambition we are carrying in France” for 30% injected biomethane into the gas network by 2030.

GRDF officials said they are working in France to encourage more RNG injection into the distribution network and to bring together all of the RNG producers. And GRTgaz has begun construction on an industrial-scale power-to-gas demonstration project.