Sempra Energy’s Southern California Gas Co. (SoCalGas) has won approval from California regulators to implement a retail rate for providing compressed natural gas (CNG) for customers using it in transportation or other applications.

SoCalGas can now can provide a compression service tariff (CST), but it is subject to various reporting and accounting requirements that the CPUC said were intended to make sure the nation’s largest gas distribution utility does not gain “an unfair competitive advantage” and also to ensure that CST customers bear all costs and risks of the new utility service.

Southern California-based Clean Energy Fuels Corp., a provider of CNG and its vehicle fueling infrastructure, opposed SoCalGas’ request for the CST, arguing it does not adequately protect against ratepayers bearing some of the costs, doesn’t provide “competitive neutrality,” and the reporting provisions will not allow the CPUC enough information to adequately evaluate the new utility service.

Clean Energy officials expressed disappointment Friday with the CPUC action, alleging it “may expose ratepayers to unnecessary risk.” Todd Campbell, Clean Energy vice president for public policy/regulatory affairs, said Sempra Utilities “should have formed an unregulated affiliate business to provide compression services so that non-participating ratepayers would be protected from a business venture that is well beyond the traditional utility services of pipes and wires.”

The CPUC’s Division of Ratepayer Advocates (DRA) also argued that SoCalGas’ utility ratepayers will not be shielded from bearing some of the costs of the CST service. The utility refuted the contentions by both Clean Energy and the DRA.

In granting the CST, the regulatory commission required that within two weeks SoCalGas make another filing outlining more specifically how the program will be tracked and allowing for the utility CST agreements to be assigned to any qualified service provider, not just a utility affiliate.

Earlier this year, California regulators opened the door to utility CST contracts when they approved a deal in which SoCalGas provides CNG services to a major bus fleet operator (see Daily GPI, April 8). That action allowed the gas-only utility to provide CNG to one of its largest customers, the Los Angeles Unified School District, for fueling its school bus fleet. Clean Energy and DRA unsuccessfully opposed that deal, too.

Non-utility natural gas transportation providers and DRA continued to dispute a proposed tariff and in one instance asked for a rehearing of the entire case. At the time, DRA said it considered the CNG market competitive, and although it was disappointed with the CPUC decision, it acknowledged that the action included several safeguards against the utility market power (see Daily GPI, April 12). 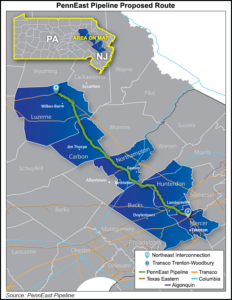