Southern California Edison Co. (SCE) is facing the current wildfire season with renewed confidence while sweating out the unknowns of the ultimate financial and legal liabilities of separate 2017 and 2018 wildfires in which the utility has been implicated. 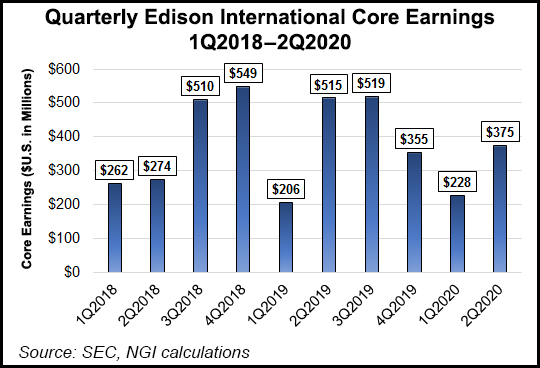 Parent company Edison International CEO Pedro Pizarro spoke about both sides of the issue during a 2Q2020 earnings conference call on Tuesday. He praised the governor and the legislature for prioritizing wildfire funding, despite facing a pandemic-caused $54 billion deficit for the new fiscal year.

“We’re also impressed by the state’s enhanced wildfire mitigation capability as we prepare for this current wildfire season,” said Pizarro. The California Department of Forestry and Fire Protection has added numerous aircraft with enhanced fire-fighting capabilities. “While we anticipate another active fire season, SCE is entering this period better prepared than ever.”

On the legal front, SCE is in a more unsettled situation from the 2017 Thomas Fire that scorched more than 280,000 acres in Santa Barbara and Ventura counties, and the 2018 Woolsey wildfire in Los Angeles and Ventura counties that were allegedly caused by SCE equipment and/or operations.

Last November, SCE reached a settlement on claims from 23 public entities, “and since that time the utility has continued to explore settlement opportunities, and during the last quarter SCE reached settlements with some of the claimants,” said Pizarro. There are still thousands of claims outstanding. “We’re committed to negotiating with all reasonable parties.”

A California Superior Court in Ventura County set next January for the start of the Thomas Fire trial, but Pizarro said the resurgence of the coronavirus may push back that timing.

SCE has too few settlements in relation to the thousands of outstanding claims at this point to make an educated estimate of the range of the overall size of the utility’s longer term exposure, he said. “Based on the very small number of the cases we’ve settled, it is not sufficient to provide any sort of material input.”