Southern Natural Gas Co. LLC (SNG) last week applied for a certificate of public convenience and necessity to FERC for its Fairburn Expansion Project, which calls for building pipelines and associated infrastructure in Georgia. 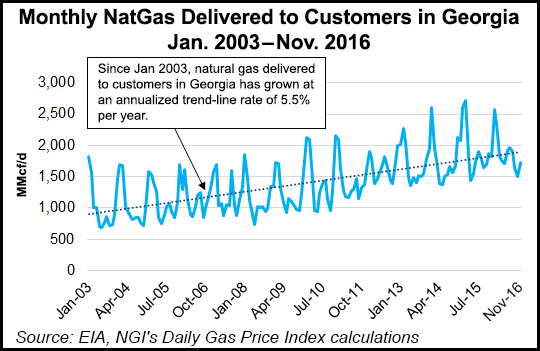 The $240 million project calls for constructing two pipeline segments, a compressor station and three meter stations [CP17-46]. It also calls for acquiring an existing pipeline lateral and modifications to two nearby meter stations. The project would provide 343,164 Dth/d of firm transportation capacity to delivery points in SNG Zones 2 and 3.

The project also calls for construction of a 1.6-mile, 30-inch diameter looping pipeline along the existing SNG South Main Line System in Monroe County, GA, SNG told the Federal Energy Regulatory Commission. The pipeline would begin near milepost 373.6 and continue to milepost 375.2.

SNG would acquire the McDonough Lateral, an existing 19.7-mile, 30-inch diameter pipeline, and associated facilities. It would also make modifications to two existing meter stations: an SNG facility in Fulton County along the SNG South Atlanta-Austell Pipeline and at the origin of the McDonough Lateral, and the Jonesboro Meter Station in Clayton County, GA. SNG also wants to build an 18,000 hp compressor station in Fulton County, to be named the Fairburn Compressor Station, at the terminus of the proposed Fairburn Lateral and adjacent to the existing SNG South Atlanta-Austell Pipeline.

Three meter stations would also be built. The Transco to SNG Meter Station would be located at an interconnect proposed with the existing Transco pipeline in Fayette County, GA. Meanwhile, the Plant McDonough Meter Station would be built in Cobb County, GA, at the terminus of the McDonough Lateral within the Georgia Power Plant McDonough electric power plant. A third meter station is to be built along the McDonough Lateral to measure natural gas delivered from SNG to the United Parcel Service in Fulton County, GA.

According to SNG, $98 million of the $240 million project would be spent for constructing and modifying parts of the overall project. The remaining $142 million is earmarked to fund the acquisition of the McDonough Lateral.