A few onshore explorers have signaled they plan to ramp up in a few select locations in the next couple of months, but that’s the exception rather than the rule, with more pain for the sector still to come, an analyst said this week. 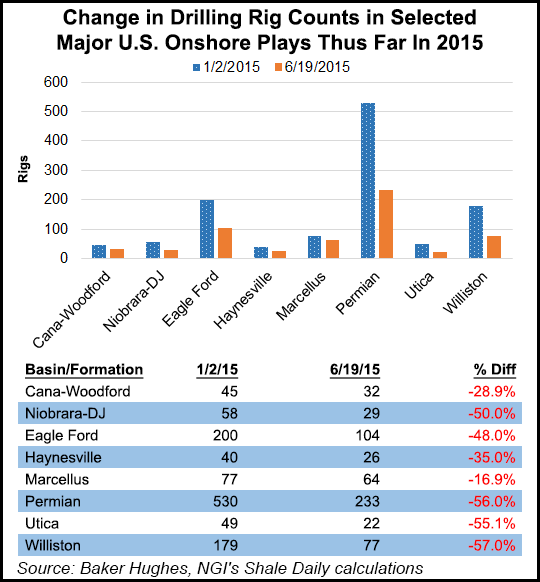 With an across-the-board decline in oilfield service costs since the start of the year, companies with core acreage in a few select regions should be able to “generate good returns on their best acreage,” said IHS Inc.’s Sven Del Pozzo, who directs U.S. equity research/play analysis. “But some companies don’t have the financials or the acreage to do that,” he told NGI’s Shale Daily.

Energen Corp. plans to boost Permian Basin drilling later this year and begin a “multi-year acceleration” in 2016 (see Shale Daily, June 17). Denver-based Cimarex Energy Co. in May said it planned to use the proceeds from a $654 million public stock sale to increase drilling in the second half of 2015 and “more significantly” in 2016. Like Energen, Cimarex is primarily focused on the Permian; it also has operations in the Midcontinent. During the third quarter, Clayton Williams Energy Inc. plans to add one rig each to its Permian and Eagle Ford Shale acreage (see Shale Daily, June 18). WPX Energy Inc., now running one rig in the Williston Basin, said Thursday it would add two more rigs to pump up the volumes this year (see related story).

For Clayton Williams, “that’s a big turn of events,” Del Pozzo said. Energen’s decision is in part based on adding hedges to its production. A few exploration and production (E&P) companies appear confident they’ve got the right stuff. He said it’s because they’ve got “the best stuff.”

“Generally, I would say that the degree of the U.S. cost declines and a combination of adding hedges…could still get a good return on some investments,” he said. But producers “still are leaving money on the table,” because they only are “drilling the best stuff.”

Even if they haven’t made any public announcements, this time is being used to experiment in the fields, said the IHS executive. When commodity prices and service costs were higher, it made less sense to experiment on horizontal drilling and hydraulic fracturing (frack) techniques.

“The drilling response is in response to cost declines,” he said. “There is experimentation, for example, with larger amounts of proppant, which has become cheaper…In a sense, they can afford to to a little experimentation with larger frack jobs on their best acreage. Typically, that’s where big frack jobs work the best.And if you are going to test out big fracks, it’s better to try it in the best areas, not the worst areas.”

The tests “have a double effect of high grading,” he said. “You are not only high grading the best acreage you are drilling, but you also are pushing the envelope in terms of research and development. It’s the first time many have been able to afford this, with costs low enough to do jobs on the best acreage. They are able to squeeze out the most return from their portfolios.”

There’s a big “but” in all of these developments. “It’s only happening for a few companies,” Del Pozzo said. “Not everybody has core acreage, and they don’t want to spend a lot of money on fracks unless they have a good balance sheet…It’s handful of companies that have portfolio opportunities open to them…

“I would not be inclined to extend generality to the entire U.S. E&P industry…Not everybody can have great acreage and it may not be that great of an opportunity for some.”

Regardless, “I don’t think we have yet to see a fallout in the E&P sector,” he said. Companies to date “are hanging on pretty strong. The consensus view is backed into the equity markets…Oil is priced at $70-75/bbl inside these stocks, and those companies are able to tap the equity markets; interest rates are low, and they are getting money. Thus far, not enough time has passed to make the sector feel the pain…The pain has yet to be felt, for the most part, except for those already in trouble.”

E&Ps with “mediocre balance sheets — they have yet to feel the pain. Even the guys that are small, they really not had that many bankruptcies…

Equity markets “really need to have a growth mentality; they need to be more focused on returns, the rate of investment. A shift like that doesn’t happen overnight. It’s been fueled by very fast growth from the E&P sector. It will take longer for them to turn over, to think about ‘how good is this company? What’s the return on investment?’ If the consensus is $70-75, you are still looking for growth. If oil stays stuck at $60, they’ll start thinking about returns.”

Oil prices may begin to increase slowly through the rest of this year, with mergers and acquisitions likely, according EY. In a webcast Tuesday, Andy Brogan, global oil and gas transactions leader, said the energy industry is talking about more combinations.

“We’re going to see volumes gradually and then very rapidly going up,” he said. It’s going to become “an opportunity-rich environment for acquirers.”

For now, however, the energy sector has become a drag on the investment markets. It dragged down the Standard & Poor’s (S&P) 500 during the second quarter, and the problem may persist through the end of the year, according to FactSet.

Earnings in the energy sector are forecast to be down 60% year/year in 2Q2015, which would pull down the S&P 500 by 4.7%, said senior earnings analyst John Butters. If the energy sector were excluded, those S&P companies would report earnings growth of around 2%.

The energy sector would become a positive contributor beginning in early 2016, according to FactSet.