Faster completions in the Eagle Ford Shale have prompted SM Energy Co. to raise production guidance by about 0.4 million boe, all thanks to activity during the second quarter. 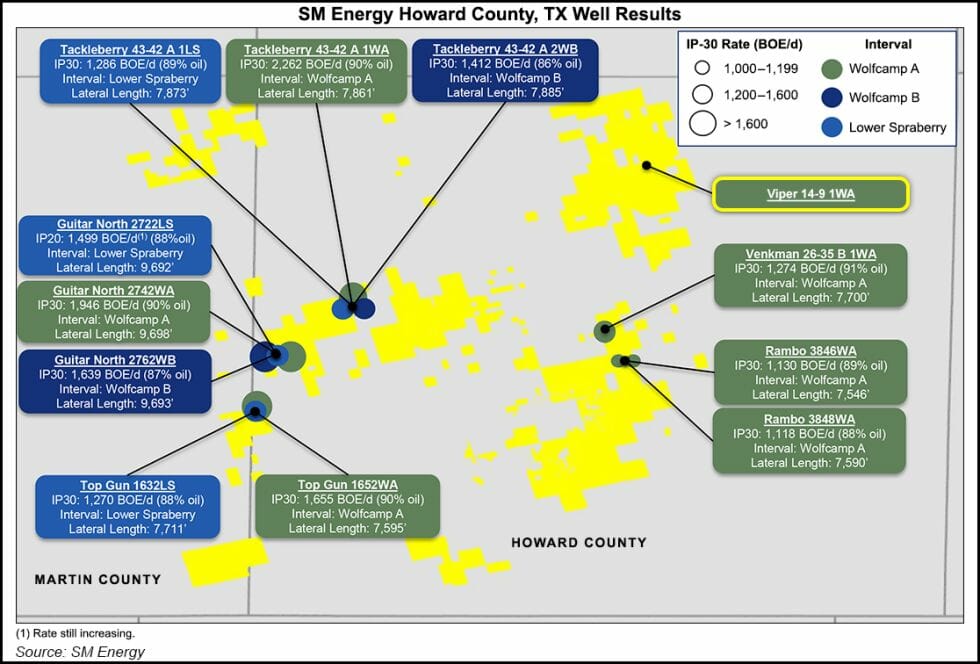 “Due to the favorable terms and performance under our pumping services agreement for the Eagle Ford, we are pleased to accelerate this activity, which we believe will result in higher cash flow and capital cost savings in 2017,” said CEO Jay Ottoson.

He also highlighted results in the Permian Basin’s Midland sub-basin in West Texas.

“I would also like to add that production from our highly anticipated Viper 14-9 1WA well in Howard County, TX, with an approximate 10,400-foot lateral drilled in the Wolfcamp A, has just passed 1,000 boe/d production at 92% oil during completion flowback with oil rates still increasing.

“It will be some time yet before we have a 30-day peak rate for this well, but this is clearly an encouraging early indication of productivity.”

Gabriele Sorbara, an analyst with The Williams Capital Group, said in a note Tuesday, “As the company grows its Midland Basin oil volumes over the next several quarters, improving visibility into 2018-2019, shares should witness multiple expansion, in our view.”

Earlier this year SM Energy closed on the sale of its nonoperated assets in the Eagle Ford, including an ownership interest in associated midstream infrastructure, to a unit of Venado Oil and Gas LLC, which is an affiliate of KKR.