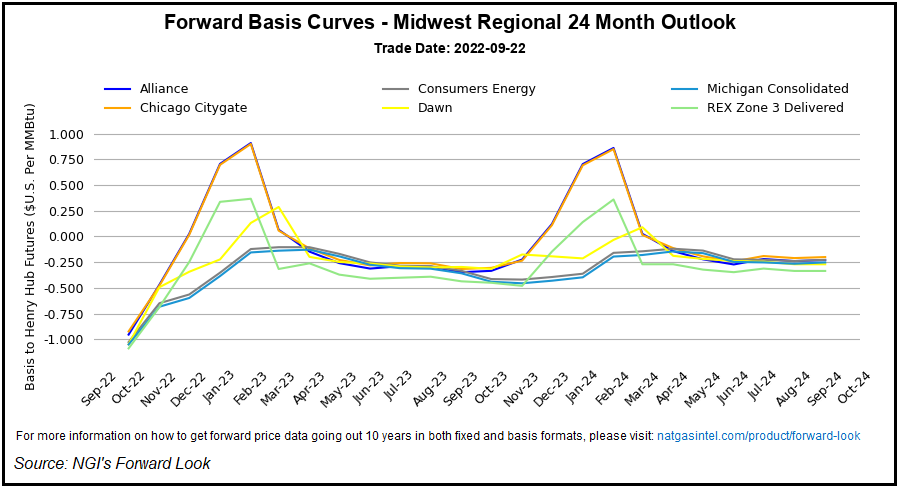 NGI’s Spot Gas National Avg. plunged $1.260 to $5.125. It fell four out of five sessions over the past week. The one day it steered clear of the red, the national average was flat.

Weather forecasts pointed to mild conditions from Chicago to Boston through next week, with long-range outlooks calling for benign temperatures through much of October.

What’s more, the National Hurricane Center on Friday said it was tracking a tropical storm in the central Caribbean. It was on a path to reach the southeastern Gulf of Mexico in the week ahead, gathering force along the way.

Production, meanwhile, was off from record highs around 100 Bcf/d earlier this month – but only slightly. Bloomberg’s estimate pegged output Friday at about 99 Bcf/d.

With production strong and demand tapering, analysts looked for another strong injection with the next U.S. Energy Information Administration (EIA) storage print. Early estimates hovered in the 90s.

That would build on Thursday’s result, an injection of 103 Bcf into natural gas storage for the week ended Sept. 16. The build was the largest of the year and boosted inventories to 2,874 Bcf. Stocks remained 10% below the five-year average, but that marked the smallest disparity since February.

For this time of year, the latest injection “was the largest of the last five years, driven by the lowest weekly degree-day total,” said Wood Mackenzie analyst Eric Fell.

Analysts at Tudor, Pickering, Holt & Co. (TPH) highlighted the 31 Bcf injection reported for the South Central region as a key driver of the “outsized build” for the period.

“On a weather-adjusted basis, we estimate the market was 2 Bcf/d oversupplied for the week versus roughly 1 Bcf/d undersupplied the week prior,” the TPH analysts said Friday.

Based on recent flow data, production “appears to have moderated from the highs” for now, with volumes averaging around 98.5 Bcf/d in recent days versus output above 99 Bcf/d earlier in the month, according to the analysts.

On the demand side, “power generation has remained a supportive driver of balances” through the first three weeks of September, with data showing overall generation up around 2% year/year and gas generation up 15% year/year, the TPH analysts said.

As of Friday, TPH’s modeling pointed to another looser-than-average print for next week’s EIA report, suggesting a build of 92 Bcf versus the 77 Bcf five-year average.

Still, bulls could wrest control from bears in coming sessions if projected stout storage injections over the next few weeks fall short of expectations. Should the winter ahead prove exceptionally cold, the market could find itself precariously light on storage if the gap with the five-year average is not narrowed substantially, as Rubin has noted.

Additionally, demand for U.S. exports of liquefied natural gas is expected to hang near record levels through the winter as both Asia and Europe clamor for deliveries of the super-chilled fuel. Both continents need imports to fortify their levels of gas in storage.

Europe, in particular, is treading in uncertain water amid Russia’s war in Ukraine. Until this year, Europe had largely relied on Russia for gas to help power it through winter. But Russia has cut off the bulk of its pipeline deliveries to the continent as part of political wrangling tied to the conflict.

Even before Russia’s invasion of Ukraine, “global natural gas prices were strengthening due to the combination of improving global demand, lagging supply and relatively low European gas storage,” BMO Capital Markets analyst Randy Ollenberger said. With Russia “cutting off” Europe, prices there “are poised to move even higher,” and this could send bullish tremors through global markets this winter.

NatGasWeather also anticipated that the tropical storm in the Caribbean will impact demand in coming days. The forecaster said data as of Friday indicated the storm would evolve into Hurricane Hermine as it approaches Florida in the week ahead.