The number of oil wells drilled but not completed across the United States is higher today than the historical norms for all major plays, but the advent of quick-to-complete unconventional drilling makes it more commonplace — and less risky, according to Raymond James & Associates Inc. 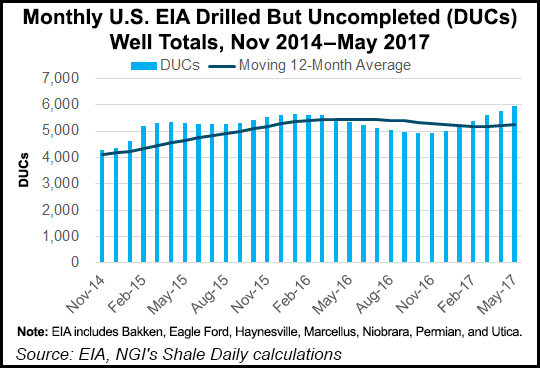 The bottom line is to not get too worked up about the coming drilled but uncompleted (DUC) drawdown, said analyst J. Marshall Adkins and his team.

“Indeed, the ratio of DUCs to monthly completions has exploded from two times in 2014 to 12-14 times by mid-2016,” he said. “Since oil bottomed in early 2016, DUC inventories (in terms of months of well completion backlog) have already begun to return toward a more ”normal’ range with the months of backlog already being cut in half to around seven times today.”

Operators gradually should “grow into” their abnormal DUC backlog with more completions, which in turn would reduce the inventory to a more manageable level by around 2020.

“Our best guess is that it will take around three to four years to work about 2,300 abnormal DUCs off, adding 150,000 to 200,000 b/d annually to the rig count-driven production increases over the next few years,” Adkins said.

According to the Energy Information Administration, DUCs at the end of May totaled 5,005 in the four oil-dominant regions — Permian, Bakken, Eagle Ford and Niobrara — an increase of 177 from Apri. There also were 941 DUCs in the three natural gas-dominant regions, the Haynesville, Marcellus and Utica shales, which was one fewer than in April.

As the DUC count reverts to historical norms within a few years, which is the Raymond James team’s assumption, “we would still expect the global oil market to be meaningfully undersupplied until oil prices rise well above $50/bbl and operators can afford to complete these wells,” Adkins said.

Raymond James is assuming oil prices will increase over the coming year, and analysts include the additional DUC-related oil supply in their models.

“Specifically, abnormal DUCs now account for about 12% of our total forecasted growth of 1.3 million b/d over the next few years,” Adkins said. “Further, upon running timing sensitivities, we find that the timing and magnitude of a potential DUC drawdown might possibly swing our annual U.S. supply growth estimate by less than 10% (or about 100,000 b/d) any given year over the next three years.”

Some analysts are anticipating the DUC drawdown will pressure oil prices, but the Raymond James team does not yet see the impending completions as an impediment to its bullish oil call.

DUCs “are only relevant for modeling the relationship between rigs, completions and production,” Adkins noted. “Since drilling rigs are currently not a bottleneck and completion costs now represent 60-70% of horizontal well costs, cash spent on completions is now the most important driver of U.S. oil supply.”

Raymond James already models DUCs as completed, so they do not represent an unexpected oil supply surge potential for its model. Completing the DUCs could add as much as 620,000 b/d of additional U.S. oil supply over the next several years, but “this is already included in our models and it assumes oil prices and industry cash flows will be high enough for companies to afford these expensive completions.”

Adkins and company view the rising DUC inventory mostly as the “natural course” of the exploration and production business.

“The shift to horizontal and pad drilling now requires a higher level of ”normal’ DUCs that are needed for today’s higher activity levels. The relatively small amount of abnormal DUCs that still exist today will likely be gradually worked off over the next few years as industry bottlenecks and constraints alleviate.”

According to Raymond James, operators appeared to have amassed close to 5,000 DUCs through May in only four major modeled oil plays — the Permian basin, Eagle Ford and Bakken shales and the Niobrara formation.

“Roughly 70% of these DUCs are located in the Permian and Eagle Ford and they amount to roughly seven months’ worth of completions within these four basins (at our current completions pace),” Adkins said. “Assuming four months of well backlog is now the new normal level of DUCs, this would imply an ”abnormal’ level of DUCs amounting to around 2,300 wells.”

Assuming each well averages 250 b/d in its first year, an average based upon where the DUCs are located, the “abnormal” well backlog could, in theory, equate to more than 600,000 b/d of additional first year production potential. But that’s only if the DUCS were completed in a single month.

“In reality,” said Adkins, “this production can’t and won’t all come online at once as there are not nearly enough completion crews available or capital available to complete them.”