Eagle Ford Shale pure-play SilverBow Resources Inc. is looking to begin expanding its dry natural gas production late this year to take advantage of what it expects will be higher prices, but it is joining South Texas producer Magnolia Oil & Gas Corp on the path of least resistance for now by suspending well completions and shutting in output until prices are more accommodating. 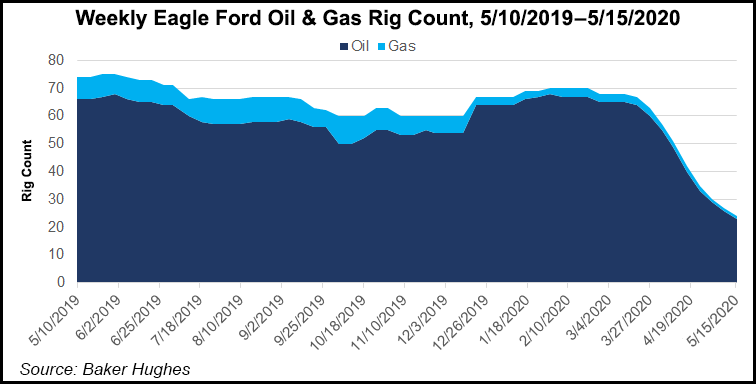 Houston-based SilverBow, which has around 200,000 net acres in South Texas, produced on average 228 MMcfe/d in the first quarter. By mid-March, however, it began curtailing production as Covid-19 grew into a pandemic.

About 50 MMcf/d of gas and 2,000 b/d of oil has since been shut-in, and more curtailments may be implemented “as a result of deteriorating commodity markets and the supporting production economics,” management said.

Capital spending for the year also has been cut by 55% to $80-95 million, with around $10 million of operating expense reductions identified and “additional initiatives underway” to unearth more reductions.

“SilverBow’s strategy of building a well balanced mix of both oil and gas locations within a low-cost, single basin remains the same,” CEO Sean Woolverton said. This year, the free cash flow target is $40-50 million, with more than $50 million eyed in 2021 “based on current strip pricing.”

While a decline in production and revenue is anticipated through the third quarter, SilverBow is preparing for a late-year rebound in natural gas output by shifting capital to develop dry gas assets, “assuming economic and industry conditions begin to return to more normalized conditions,” said the CEO.

“Our plan is to ramp up gas production in alignment with improving natural gas prices starting toward the end of this year and continuing into 2021. This strategy will position the company to efficiently return to operating and financial levels prior to the disruption brought on by the novel coronavirus pandemic and the related economic repercussions that have created significant volatility, uncertainty and turmoil in the oil and gas industry.”

“The company continues to benefit from strong basis pricing in the Eagle Ford,” management said. Crude realizations were 98% of West Texas Intermediate, and gas also was at 98% Henry Hub, excluding hedging.

SilverBow has suspended its drilling and completions activity “until prices warrant further investment,” management said. “Production guidance for the second quarter assumes significant curtailments of both oil and gas volumes,” with wells tied to sales over the second half of the year. The company released its one drilling rig in April and has deferred bringing online eight wells.

Giddings and other production averaged 23,000 boe/d in the first three months, with oil at 6,500 b/d and 17% higher than in the fourth quarter.

“Our underlying business and assets performed better than expected during the first quarter,” said CEO Steve Chazen. “Our philosophy toward disciplined capital spending and low financial leverage should continue to support us during the current challenging environment. Our drilling results in the Giddings field were particularly strong, with two of our best wells drilled to date brought online during the quarter.”

Magnolia has taken steps to mitigate the impact of weaker product prices caused by the plunge in global demand from Covid-19, Chazen said. The independent has flexibility built into the strategy, allowing it “to adjust our activity levels relatively quickly.”
Through the end of the year, capital spending for drilling and completions is set to sharply decline. One operated rig is still running, but all well completions have been halted.

“We will continue to focus on what we can control and have implemented cost reduction initiatives throughout the organization in order to better align our cost structure with the current market environment,” Chazen said.

A corporate-wide cost reduction program is in place to help lower expenses throughout the organization, and Magnolia is working with vendors and suppliers to reduce oilfield services costs. In addition, salary reductions of 10% across the business have been implemented.

Magnolia ended the quarter with $146.5 million of cash and has no plans to add any debt. “Our current cash on hand would be able to cover all our remaining capital, overhead, and interest payments at least through 2020, even before considering the revenue from our production,” the CEO said.