Forecasts have been teasing the potential for cold returning later this month, but natural gas futures fell along the winter strip Thursday as the latest government storage data showed once-intimidating deficits continuing to shrink. 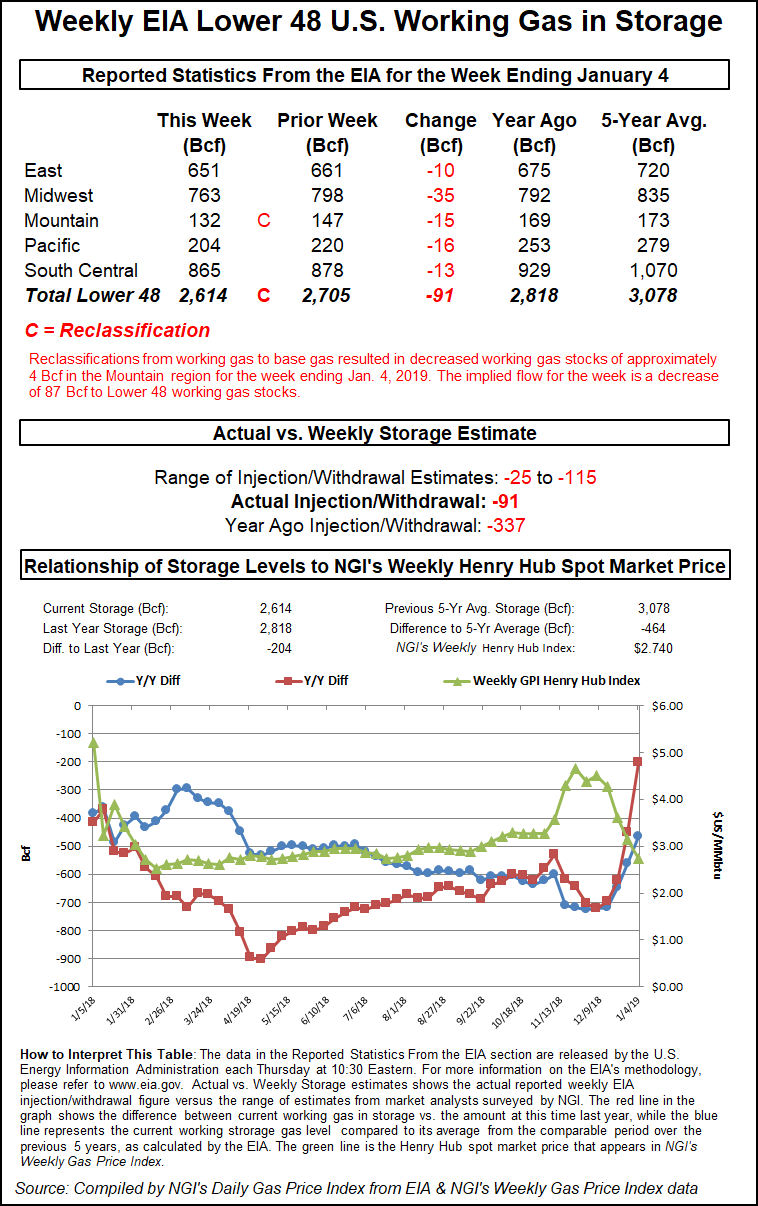 A cold spell continued to support strong spot prices for East Coast markets, while most of the remainder of the country traded below $3; the NGI Spot Gas National Avg. added 2.0 cents to $3.175/MMBtu.

“It has been a frustrating week for natural gas bulls, as a number of early morning rallies have continued to fail as cash prices have lagged more than expected and a very weak March contract has dragged the February contract back down,” Bespoke Weather Services said. “…We still see February gas prices as relatively undervalued under the $3 level given expectations that cold increases into the final third of January and can get very impressive into February.”

Bespoke said the market has been discounting the cold risks, with prices “barely” responding to colder European guidance Thursday that it said “markedly” increases confidence in gas-weighted degree days returning to above-average levels during the Week 2 outlook period and continuing into Week 3.

Meanwhile, the Energy Information Administration (EIA) on Thursday reported an 87 Bcf withdrawal from U.S. gas stocks for the week ended Jan. 4, a number that fell on the bullish side of expectations but not enough to impress natural gas futures markets. EIA also reported a 4 Bcf reclassification in the Mountain region that resulted in a net 91 Bcf decrease in inventories for the period.

Perhaps tantalized by the prospect of colder temperatures returning later this month, February Nymex futures had probed above $3.085 earlier Thursday morning before receding to around $3.020-3.030. As EIA’s figure crossed trading screens at 10:30 a.m. ET, the front month briefly popped to as high as $3.066, but by 11 a.m. ET prices had fallen back to around $2.994, down from pre-report trading.

Prior to Thursday’s report, major surveys had pointed to a pull in the mid-70s Bcf but with estimates running the gamut from minus 25 Bcf to minus 115 Bcf. Intercontinental Exchange EIA Financial Weekly Index futures settled Wednesday at a withdrawal of 78 Bcf.

The 87 Bcf figure follows last week’s bearish surprise, when EIA reported a meager 20 Bcf pull. While larger than many survey respondents had predicted, 87 Bcf still pales in comparison to the massive pull recorded around this time last year.

A year ago, EIA reported a record-setting 359 Bcf withdrawal for the week ended Jan. 5, 2018, a period that saw intense cold drive huge price spikes along the East Coast. The five-year average for the period is a withdrawal of 187 Bcf, according to EIA.

By region, the largest withdrawal came in the Midwest at 35 Bcf, while the East withdrew 10 Bcf for the week. In the Pacific, 16 Bcf was withdrawn, while 13 Bcf was pulled from South Central stocks, including a 19 Bcf withdrawal from nonsalt that offset a 6 Bcf injection into salt caverns.

EIA reported an 11 Bcf withdrawal in the Mountain region, with a net 15 Bcf decrease in regional stocks for the week after the reclassification of 4 Bcf from working gas to base gas.

Despite missing to the bullish side of expectations, the 87 Bcf build indicates a bearish supply/demand balance, according to analysts with Raymond James & Associates. The Raymond James team said the withdrawal implies the market was about 6.1 Bcf/d looser versus last year on a weather-adjusted basis.

Jefferies LLC analysts noted the shrinking in the year/year (y/y) deficit, pointing to light withdrawals the past two weeks that contrasted sharply with the 206 Bcf withdrawal EIA reported for the last week of 2017 and the record-setting 359 Bcf pull for the first week of 2018.

“Given the much warmer weather y/y over the past several weeks, we now believe it is possible that storage levels can normalize in the back half of winter,” the analysts said. “We estimate that production needs to average about 8 Bcf/d higher y/y for the remainder of winter for storage to reach average by the end of March, implying production of around 85 Bcf/d, in-line with recent levels.”

Milder weather has led to roughly 32% below average demand month-to-date in January, but production has also been negatively impacted by weather this winter, according to the Jefferies team.

“The Rockies is likely responsible for much of the decline, with temps dipping into the single digits recently and causing freeze-offs,” the analysts said. “Overall, total U.S. January production, at 84.4 Bcf/d, is down 1.2 Bcf/d versus the November average (which was a new monthly high) and is down 1.0 Bcf/d versus the December average of 85.4 Bcf/d.”

Price movements along the East Coast were mixed Thursday as a number of points continued to trade at elevated levels amid cold temperatures moving through the region this week and into the weekend.

“A strong cold front will push across the Great Lakes and Northeast the next several days, with lows reaching the single digits to 20s for strong demand,” NatGasWeather said in its one- to seven-day outlook Thursday. “However, much of the rest of the country will be mostly mild with highs of 40s to 70s to counter.

Locations throughout the Midwest, Midcontinent and Gulf Coast held steady for the most part, continuing to trade at sub-$3 prices as milder temperatures and additional slack in the storage outlook have erased risk premiums. Benchmark Henry Hub added 4.5 cents to $2.950. In Texas, Katy notched 2.0 cents to $2.820, while Texas Eastern S. TX traded fell a penny to $2.805.

U.S. pipeline exports to Mexico have rebounded from holiday season lows, according to Genscape Inc.

“Border flows in recent days have increased to serve higher Mexican demand (primarily on the power side), while Mexican domestic production and LNG sendout have declined,” senior natural gas analyst Rick Margolin told clients Thursday. “Our estimate of flows on Tuesday pushed exports back above the 5 Bcf/d mark for the first time since early November, and Wednesday’s estimate at 5,145 MMcf/d is nearly 1.2 Bcf/d above the Dec. 26 low and the highest mark in 114 days.”

Exports from South Texas account for the “overwhelming majority” of the recent increase at 0.9 Bcf/d, according to Margolin, who said Genscape projects U.S. pipeline exports to Mexico will average 4.7 Bcf/d for the month of January.

Forward prices at PG&E Citygate have thus far failed to respond to below-normal storage inventories for the Pacific Gas & Electric (PG&E) system, according to Genscape.

While Northwest Pipeline and Southern California Gas (SoCalGas) are heading into the last three months of withdrawal season with inventories close to five-year norms. PG&E’s average winter-to-date inventory for both core and noncore storage fields has been 35% below the five-year norm, the firm said.

Through the end of December, SoCalGas winter-to-date storage was 20% above average compared to the prior winters, which includes impacts to stockpiles in the aftermath of the 2015 leak at the Aliso Canyon field, according to Bernardi.

“However, cold weather and elevated demand over the last two weeks eroded that surplus by half, in part due to withdrawals from Aliso Canyon,” the analyst said. “In accordance with the current withdrawal protocol, these were made as a last resort after the pipe had issued calls for voluntary electric generation curtailments.”