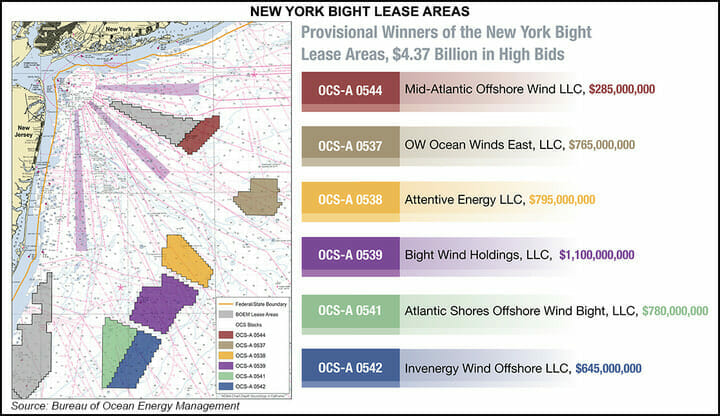 The largest lease, Outer Continental Shelf (OCS)-A 0539, could hold an estimated capacity of 3 GW, according to RWE, and is expected to be in operation by 2030. The German energy company noted this is its first entry into the U.S. offshore wind market.

“Winning a lease in the New York auction is a significant move for us as it marks RWE’s entry into the U.S. offshore wind market, one of our key strategic markets,” said RWE Renewables’ Sven Utermöhlen, CEO of Offshore Wind.

Gaining a foothold in the U.S. offshore wind market puts RWE closer “to tripling our offshore wind capacity to 8 GW by 2030, as part of our ‘Growing Green’ growth and investment program,” said Utermöhlen.

“This development adds another dimension to our renewable business in the U.S., currently representing 4 GW of solar farms under development,” said TotalEnergies CEO Patrick Pouyanné. “This is the largest renewable energy project TotalEnergies has ever undertaken and we now have a portfolio of over 10 GW of offshore wind projects, a technology in which we aim to be a world leader by leveraging our offshore expertise.”

Germany-based Energie Baden-Württemberg AG, EnBW America’s principal, announced Monday it is seeking to focus on its European offshore wind assets, and will sell its U.S. offshore wind activities to TotalEnergies.

“We are pleased to have been able to contribute our offshore expertise and experience to this joint success,” said Senior Vice President Michael Class of Power Generation Portfolio Development. “At the same time, now is also the right time for us to realign our offshore activities with focus on the European market.”

Atlantic Shores took nearly 80,000 acres at lease location OCS-A 0541 in a $780 million bid. The site has an estimated installation capacity of 924 MW, according to the Bureau of Ocean Energy Management (BOEM).

Meanwhile, Mid-Atlantic Offshore secured OCS-A 0544 in a $285 million bid. The BOEM estimated the 43,000-acre site has an installation capacity of 523 MW.

The BOEM also named Invenergy Wind Offshore LLC, led by project sponsors Invenergy and energyRe, as a winner of lease OCS-A 0542. With a $645 million bid, Invenergy Wind secured an 83,976-acre area with an installation capacity of 934 MW.

Before the leases are finalized, the Department of Justice and Federal Trade Commission are to conduct a review of the auction, after which the provisional winners would pay the bids and provide financial assurance to the BOEM.

The New York Bight is not the only location for offshore wind development that the BOEM has identified. Last year, Secretary of the Interior Deb Haaland announced six other potential lease sales by 2025, including offshore the Central Atlantic, Gulf of Maine, Gulf of Mexico and offshore Oregon. The coastal waters of the Carolinas and California also would be sites for future lease sales.

TotalEnergies announced recently it would participate in the California lease sale following its acquisition of EnBW’s shares in a JV, Castle Wind LLC. The JV, formed in 2018 with Trident Winds Inc., indicated it would bid in the BOEM’s California offshore wind lease sale in late 2022.