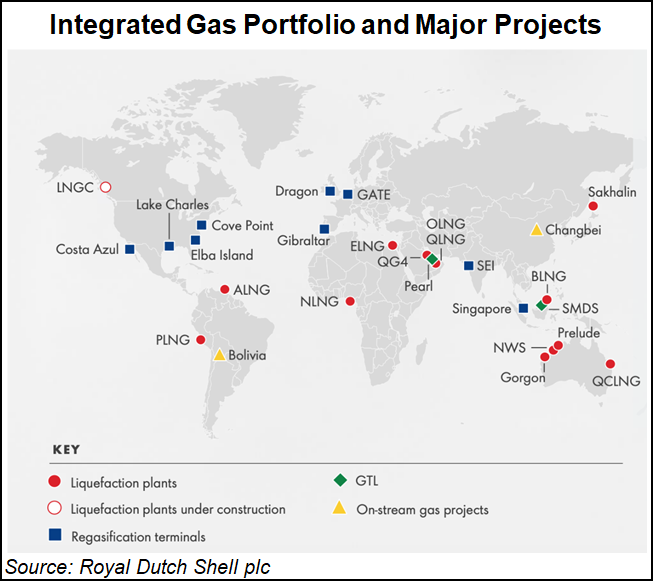 Van Beurden and CFO Jessica Uhl helmed a conference call to discuss the third quarter results. Shell’s strategy has come under fire from climate activists and courts, but it increasingly is facing scrutiny from investors.

The latest threat is by hedge fund Third Point LLC, which reportedly has taken a $750 million stake. It wants Shell split into at least two businesses. One would house the global liquefied natural gas (LNG) assets and the growing renewables arm. The other would hold the legacy oil and gas portfolio.

Splitting up the business won’t work, as achieving the net-zero carbon goal is going to be funded by the legacy assets, van Beurden said during the conference call.

“We are able to do things with the collections of assets, business models, customer-facing businesses that we have that are very hard to replicate if you were just to split up in a number of other companies,” van Beurden said. “A very significant part of this energy transition that we are talking about is going to be funded by the legacy business.”

If Shell’s scale and cash flow were reduced, “I think you can safely say the energy transition is going to be a whole lot more difficult…And it may not even happen at the pace that is needed.” By splitting Shell up, “you’re effectively taking away our ability to fund the future of energy.”

The latest investor skirmish echoes the battle earlier this year between ExxonMobil and upstart investor Engine No. 1, which also has questioned strategies. Engine No. 1 now holds three seats on the board.

The letter from Third Point, run by Daniel Loeb, that was sent on Wednesday, stated, “Shell has too many competing stakeholders pushing it in too many different directions, resulting in an incoherent, conflicting set of strategies attempting to appease multiple interests but satisfying none.”

By appeasing legacy investors and with the pressure from environmental, social and governance initiatives, “Shell has ended up with unhappy shareholders who have been starved of returns and an unhappy society that wants to see Shell do more to decarbonize.”

Dutch pension fund ABP, which holds massive stakes in many oil and gas companies, on Wednesday also announced it was divesting its holdings including in Shell, by early 2023.

“Replacing long-term, thoughtful investors by, say, hedge funds is not necessarily for the benefit of the energy transition either,” he said. “To be perfectly honest and a bit frank, I think it’s all about symbolism here.”

Van Beurden was asked during the question-and-answer period why Shell didn’t focus only on oil and natural gas development, given it appeared unable to appease the critics.

“If we were to just double down on carbon, that would obviously not be the right thing to do,” he said. He later added vehemently, “we will not double down on fossil fuels.”

Beyond the investor revolt, there were other concerns in the quarterly results. For example, Shell failed to take advantage of the sharp uptick in natural gas prices. It was burned by its hedging strategy, which limited exposure to the spot gas market, Uhl explained.

Shell also fell short in securing enough gas supply for some customers, forcing it to go to the market to buy gas at soaring prices.

LNG liquefaction volumes during 3Q2021 fell to 7.39 million metric tons (mmt) from 7.8 mmt in the year-ago period, off by 1% because of “feed gas constraints and cargo timing, partly offset by lower maintenance activities.” LNG sales volumes also were down from a year ago at 15.18 mmt from 17.63 mmt.

The financial losses in the Integrated Gas segment were an “opportunity cost,” Uhl said. “We weren’t necessarily anticipating these astronomical prices to be sustained as long as they have.”

In the Integrated Gas segment, “our trading and optimization results continued to be impacted by gas and LNG supply shortages while the assets benefited from higher prices,” she said.

“With most of our LNG sales linked to oil prices in long-term contracts, we saw limited benefit from higher spot gas prices in the third quarter.

In the Upstream arm, total oil and gas production fell by 8% year/year to 2.08 million boe/d. Natural gas production was down 17% to 3.387 Bcf/d. Shell during 3Q2021 sold its Permian Basin portfolio to ConocoPhillips for $9.5 billion.

In other news, Shell announced that it has boosted its emissions reductions goals. It now is targeting a 50% reduction in direct and indirect emissions in its operations, i.e. Scope 1 and 2, by 2030 using a 2016 baseline.

That could strengthen the near-term climate goals as the company also is under legal pressure following a Dutch court ruling in May to reduce emissions at a faster clip.