The United States is likely to account for about 85% of the increase in global oil production and 30% of natural gas output to 2030, putting pressure on the world’s traditional operators, according to the latest projections by the International Energy Agency (IEA). 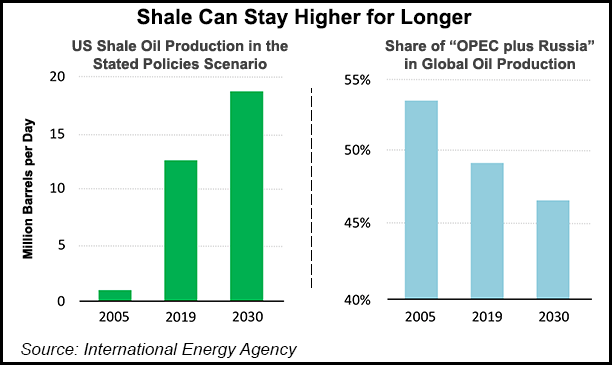 In its World Energy Outlook 2019 (WEO-2019), IEA’s Stated Policies Scenario, considered the most likely forecast over the period to 2040, sees the United States expanding its position as an oil and gas exporter, with domestic production overtaking total output from Russia before 2025.

“Global oil output rises by around 10% and natural gas production by almost 40% to 2040 in the Stated Policies Scenario,” the researchers said. “The rise in U.S. output, together with increases from Norway and Brazil, mean that the Organization of Petroleum Exporting Countries’ share of global oil production declines to 36% by 2025, a level not seen since 1990.”

Domestic tight oil output was only 600,000 b/d in 2010, but today it exceeds 6 million b/d, “a rise that already matches the fastest ever seen previously in oil markets,” compared to Saudi Arabia in the late 1960s.

“The assumed size of the resource base for U.S. tight oil, based on the latest play-by-play assessments and estimates, is 35% higher than in the WEO-2018,” the researchers said. “As a result, output stays higher for longer; the largest difference comes not in the high point reached, but the extent to which it is sustained over the latter part of our projection period.”

Still, the gains in tight oil resources also mean that the 2040 oil price may be around 10% lower than IEA forecast in the WEO-2018 report.

Thanks to its tight oil reserves, the United States is likely to become “a major actor in international oil markets,” the researchers said. “Gross exports of lighter crude and refined products reach 12 million b/d by 2030; imports of oil, mainly heavier crudes fall to 7.5 million b/d.”

Meanwhile, tight/shale gas produced in the United States should be bolstered in the near term by increased volumes of associated gas, IEA noted.

“By the mid-2020s, almost one-quarter of the gas produced worldwide is coming from the United States” under the Stated Policies Scenario. “The domestic U.S. market and the pipeline connections to neighboring markets in Canada and Mexico can only absorb a part of this increase,” which means the main outlet will be via liquefied natural gas (LNG) exports. The U.S. LNG trade is expected to grow at a rate of 3.5%/year in the Stated Policy Scenario to 2040.

The United States also is expected to remain a major oil importer because of how its refineries are configured, researchers said. The United States “tends to produce and export light crude oil and to import heavier crude,” with more oil flows forecast into and out of U.S. ports than before the unconventional boom.

The experience of the United States with the unconventional oil and gas revolution “shows how a concentrated shift in investment flows can change energy dynamics very rapidly,” researchers noted.

A decade ago, the idea that the United States could become a net oil exporter “was almost unthinkable, yet it is on the verge of becoming reality,” and “a consideration which should give pause to those discounting the potential for rapid changes elsewhere in the energy sector.”

In the past 10 years, IEA estimated that the unconventional revolution has stimulated more than $1 trillion in investments, with nearly $900 billion alone in the upstream. For now, however, overall investments have not proved profitable for many companies.

As of 2018, “the upstream shale industry as a whole has yet to achieve positive free cash flow.”
Still, the projections suggest that the shale/tight resources race “is not yet run; many of the most profound impacts of the shale revolution still lie ahead.”

Oil and gas markets “may appear to be heading along divergent tracks in our scenarios, but the links between our U.S. tight oil and shale gas outlooks are a reminder that, even as downstream ties are loosened, there are still strong upstream connections between the two fuels,” the researchers said. On average, they noted, every 1 bbl of oil produced today comes with around 60 cubic meters of gas, or about 2,119 cubic feet.