Global strategic positioning of the United States is going to be driven by the development of domestic shale plays, petroleum analyst/consultant Tom Petrie said Thursday at the Williston Basin Petroleum Conference in a talk centered on “The Geopolitics of Shale Oil.” 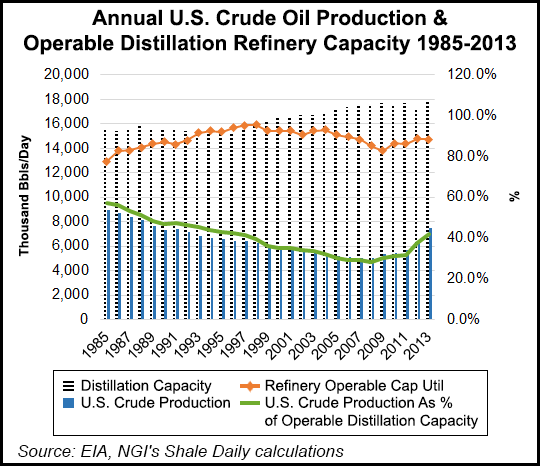 Concluding that global energy prices during the past 40 years have been driven by geopolitical events going back to the oil embargo of 1973 coming out of the Yom Kippur War, Petrie predicted that is not going to change, and volatility of world prices is not likely to lessen. Energy development and pricing have been driven largely by a whole set of “globalization trends” since the end of World War II, he said.

Global population growth is the major driver for the need for abundant and reasonably priced oil, said Petrie, noting that when he was born in 1945 the world population was about 2.5 billion, and it is now nearly 7 billion and projected to grow to 8 billion by 2030, “which is just around the corner from a strategic planning perspective.”

The importance of energy worldwide to future development, particularly in developing nations, cannot be overstated, Petrie said. “It is central to economic growth, and it is central to broadening the wealth opportunities of the United States and the global population.”

To underscore how profound he sees the influence of North American shale development, Petrie said the first three decades of his career as a petroleum analyst were focused on studying the global concept of “peak oil,” meaning the point at which the world would reach its maximum production of crude oil. In the 1950s that point was set at 1970. “The prospects for oil now are limitless,” he said.

Shale development means “the prospects for developing much larger supplies are there, and we can indefinitely postpone the old peak oil fears that were so dominant less than a decade ago,” said Petrie, adding there has been a four-fold increase in the amount of global oil reserves and a 10-fold increase in global natural gas reserves.

Something he called “unimaginable” a decade earlier — the elimination of U.S. oil imports from outside of North America — is possible in the next few years, Petrie said.

While he said the Obama administration seems reluctant to deal with the continuing federal ban on U.S. crude oil exports, “it is now clear that our ability to produce oil is going to exceed our ability to refine it and the demand for it domestically. We are very likely to need to export some oil to premium markets, while importing other oil that is better suited for certain of our refineries.”

Petrie sympathized with the industry’s frustration over delays in the proposed Keystone XL northern portion of the TransCanada proposed oil sands pipeline from Alberta to Oklahoma for what he called “questionable environmental concerns.” He said the controversial project can provide “critical connectivity” for North America crude to international markets.

“Another offshoot of the delays in Keystone is that it is going to put incredible pressure on rail oil shipments,” said Petrie, adding the too much crude rail transport is actually more environmentally harmful than a combination of rail and pipelines. “Some of the advantages of rail transport are enormous, but to put it all on rail is risking more derailments and other incidents.”

In addition, Petrie called the prospect for natural gas exports “a really critical element in the global energy picture.”