Seventy Seven Energy Inc., the onshore oilfield services business spun off from Chesapeake Energy Corp. less than two years ago, said Tuesday it has filed a pre-packaged plan of reorganization under Chapter 11 of the U.S. Bankruptcy Code in the United States Bankruptcy Court for the District of Delaware. 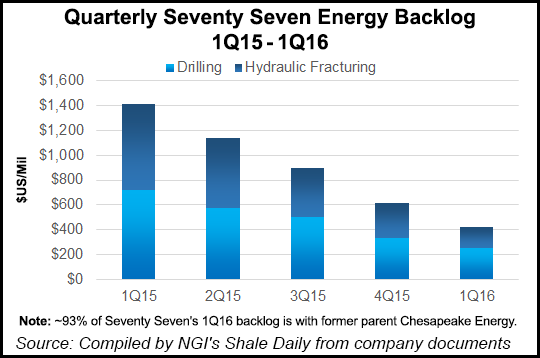 As previously announced, Seventy Seven’s plan provides for a substantial deleveraging transaction that would earmark about $1.1 billion of the company’s outstanding debt to be converted to equity (see Shale Daily, April 19). The reorganization is expected to conclude within 60 days, Seventy Seven said.

“The successful completion of the solicitation process and today’s filing represent the next step forward in our financial restructuring,” said CEO Jerry Winchester. “The support of all of our stakeholders will allow our company to expedite the reorganization process and maximize our operational strengths and assets to grow our business as the market recovers.”

Oklahoma City-based Seventy Seven said in April that it planned to restructure under a prepackaged voluntary bankruptcy protection plan and entered into a restructuring support agreement with some of its lenders that provided for deleveraging the balance sheet. The operator agreed to issue new common stock to investors holding 92% of the principal in an outstanding term loan and 57.7% of its 6.625% senior notes maturing in 2019. The agreement would convert about $1.1 billion of debt into shares, or about 69% of its total obligations, “without interrupting the company’s daily operations.”

The filing follows the completion of the solicitation process, which began on May 9 of lenders representing the company’s Incremental Term Supplement (Tranche A) loan, lenders representing the company’s $400 Million Term Loan Credit Agreement dated June 25, 2014, noteholders of the company’s 6.625% senior unsecured notes due 2019 and noteholders of 6.50% senior unsecured notes due 2022. “The solicitation process resulted in overwhelming approval of the pre-packaged plan presented by the company,” Seventy Seven said.

A key component of the plan is that all trade creditors, suppliers and contractors would be paid in the ordinary course of business. All of the commercial and operational contracts would remain in effect, preserving the rights of all parties and continuing customer relationships uninterrupted. The company has said that employees would be paid per usual.