Natural gas futures faltered on Friday as traders took profits and markets focused on a near-term shift in weather that is expected to usher in a reprieve from the oppressive heat that has defined the summer to date over much of the Lower 48. 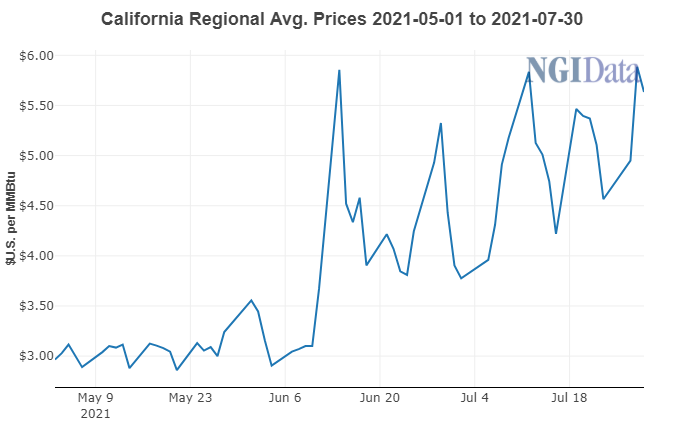 The September Nymex contract dropped 14.5 cents day/day and settled at $3.914/MMBtu. A day earlier, in its debut as the prompt month, September rallied 9.2 cents. Futures had advanced more than 11% to that point in July. October shed 14.0 cents to $3.920 on Friday.

“National demand will ease to much lighter levels” over the coming week “as weather systems sweep across much of the eastern half of the U.S. with highs of upper 60s to lower 80s,” NatGasWeather said. The firm projected the coolest conditions across the Great Lakes and Northeast. “It will still be hot next week over the West and Plains, including much of Texas, but not enough to counter” the comfortable conditions in the East.

Meanwhile, Texas Eastern Transmission Co. (Tetco) notified shippers ahead of trading Friday that it had received approval from federal regulators to return its 30-inch diameter system to full operating pressure, with capacity expected to increase by roughly 0.5 Bcf/d starting in the coming week.

Bespoke Weather Services said this would “have some impact on Henry Hub pricing specifically.” However, the firm doesn’t see the restored capacity “significantly affecting the supply/demand balance,” and it anticipates a return of upward pressure on prices in August.

Production estimates held around 91.5 Bcf on Friday, shy of the 93 Bcf or higher that Bespoke has said may be needed to keep pace with demand that has been driven by both domestic cooling needs – particularly in the drought-stricken West — and robust levels of liquefied natural gas (LNG) activity. LNG feed gas volumes consistently approached 11 Bcf over the past week, putting export activity near capacity levels.

While cooler early in the first week of August, “we continue to see above-normal heat return as we head into the following week, as a drop in global angular momentum anomalies (a La Niña-ish signal) brings upper level ridging back into the eastern U.S.,” Bespoke said. “This tentatively places the week ending Aug. 13…in competition for the hottest week of the summer.”

The “overall backdrop remains skewed to the bullish side, as we still see no material gains on the production side, all while exports remain strong,” Bespoke added. “Near-term sentiment remains neutral, as price action can remain choppy, but as we say every day, until we see solid gains in production, price risks based on the balance are skewed toward more upside.”

Following a scorching hot June and elevated temperatures throughout the West in July, coupled with LNG demand, EBW Analytics Group said Friday the natural gas inventory trajectory is “on track for the second-lowest end-of-injection season storage levels of the past decade.”

The one year in that span “with lower storage than current October 2021 projections, 2018, saw early-winter prices spike to $4.837 on brief November cold. With a low storage trajectory, the market could be similarly vulnerable to price gains this year. Although natural gas prices may retreat near term, this medium-term bullish upside is likely to mitigate declines and amplify gains during the three remaining months of the injection season.”

The U.S. Energy Information Administration (EIA) on Thursday reported an injection of 36 Bcf into natural gas storage for the week ended July 23, bullish relative to market expectations. The build lifted inventories to 2,714 Bcf, but it left stocks far below the year-earlier level of 3,237 Bcf and below the five-year average of 2,882 Bcf.

Wood Mackenzie analyst Eric Fell said adjusting for normal seasonality, the reported injection was tight by 2.4 Bcf/d versus the prior five-year average.

“While degree days were little changed versus the previous week, power demand increased by 12 Bcf due to a large decline in renewable generation,” Fell said. “Four of the last six weeks have been tight by more than 2 Bcf/d. Each of these tight weeks has corresponded to [renewable] generation coming in at/below the prior five-year average…Notoriously fickle wind utilization has realized below expectations in June and July, while hydro has been low all summer due to the drought in the West.”

BTU Analytics’ Matt Hagerty, a senior energy analyst, said the gas market may not get the boost in production it might need ahead of winter.

Early signs from exploration and production companies’ second quarter earnings “indicate they are remaining committed to restraining from production growth. As such, many traders are already looking towards the end of the 2021-22 winter to highlight the dire state of storage. The so-called widow-maker spread, or the spread between March and April Henry Hub contracts, is at its widest this summer since the summer of 2018.”

Against that backdrop, Goldman Sachs analysts upped their forecasts for natural gas prices for the coming winter. The Goldman team sees Henry Hub winter prices averaging $3.50, up from a previous forecast of $3.10. The analysts also see summer 2022 prices at $3.30 versus an earlier projection of $2.90.

Mild temperatures and rain moved in over portions of the Plains and Midwest on Friday ahead of a broader cooldown.

A strong weather system with relatively cool air and a rash of thunderstorms was expected to push across the Great Lakes and into the East over the weekend and deliver comfortable highs of upper 60s to 80s to start the next trading week.

The volatile Northeast was an exception to the broader rule Friday, with prices climbing at a majority of hubs in the region after losing ground a day earlier. Algonquin Citygate near Boston, for example, gained 18.0 cents to $3.000, and recovered most of the 22.0 cents it shed the prior day.

Senior meteorologist Mickey Shuman of IBM’s The Weather Company said while July ended on a hot note, with cumulative cooling degree days higher than normal, the expected cooler air will likely drive gas demand lower than average for the first week of August. However, temperatures are expected to trend back to seasonal norms before mid-August, likely reigniting solid summer demand.

The West, Texas and much of the Plains are expected to be hot and humid with highs ranging from the upper 80s to 100s in the second week of August. Highs were projected to climb back into the 80s and 90s in the East.

“With the exception of the Northeast, most of the country has been exceptionally hot,” Marex North America LLC’s Steve Blair said. Blair, a senior account executive, told NGI that, while weather conditions inevitably ebb in given stretches, most forecasters expect heat to persist through August and likely into September. This should drive demand and support cash markets in coming weeks, he said.