San Diego-based Sempra Energy said it plans to target nearly 90% of its capital investments this year in its three major utilities operating in California and Texas. 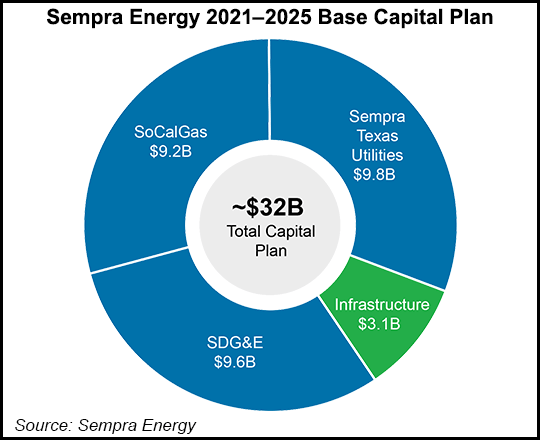 In its current capital expenditure (capex) plan for 2021 through 2025, most of the budget would be earmarked for Dallas-based Oncor Electric Delivery Co. LLC at $9.8 billion. San Diego Gas and Electric Co. (SDG&E) capex was set at $9.6 billion, with Southern California Gas Co. (SoCalGas) at $9.2 billion.

“We think there is at least an incremental $1.1 billion in additional capex just in the two California utilities in the next two years, and we’ve raised Oncor’s totals by another $200 million in that same time frame,” CEO Jeffrey Martin said last month during the quarterly earnings call.

“We’ve specifically avoided generation and being exposed to commodity prices,” he said. “We want to invest in the grid as an energy infrastructure company.”

In regard to the freeze that stymied the Texas power grid and natural gas deliveries last month, Oncor “stood tall” in the Texas electricity market, according to Martin. Federal and state investigations underway should lead to developing more resiliency and more investment in transmission and distribution, he said.

“They’re not going to be spending less capital,” he said. “It will certainly be more, and we’ll be part of the solution.”

With 74% of the $37 billion U.S. utility rate base exposed to what he called the electrification trend, Martin spent time talking about what he sees as the upside of natural gas utilities in the face of various anti-fossil fuel climate change mitigation policies.

“There is really an untold story of the criticality of natural gas to support the energy transition” underway around the world, Martin said. “Eighty percent of the world’s carbon emissions come from oil and coal, and by the mid-2030s the most dominant fuel will be natural gas.”

Last summer grid blackouts in California, during a heat wave, was the result of overreliance on imports and not fully appreciating the role of natural gas as a partner to renewables, he said.

“Longer term, natural gas, which over time will be replaced by green hydrogen, will be the best way to get after heavy duty transportation and the industrial side of the equation,” Martin said. “Electrification can only take you so far, and then we will be moving from natural gas to hydrogen.”

Expanding the U.S. transmission and distribution grids is essential, with some projections calling for a five-fold expansion by 2050, Martin said.

Sempra is striving to remain a top North American owner of utility energy networks and wants to “be in position to take advantage of important trends around electrification.”

The priority remains “building our Sempra’s energy platforms in California and Texas,” Martin said. Investments in liquefied natural gas exports and Mexican infrastructure are complementary but less of a priority.