Sempra Energy is exploring ways to expand the proposed capacity and expedite development of its EnergÃ­a Costa Azul (ECA) liquefied natural gas (LNG) liquefaction project once the second phase is underway in Mexico’s Baja California state, the executive in charge of the project said Wednesday. 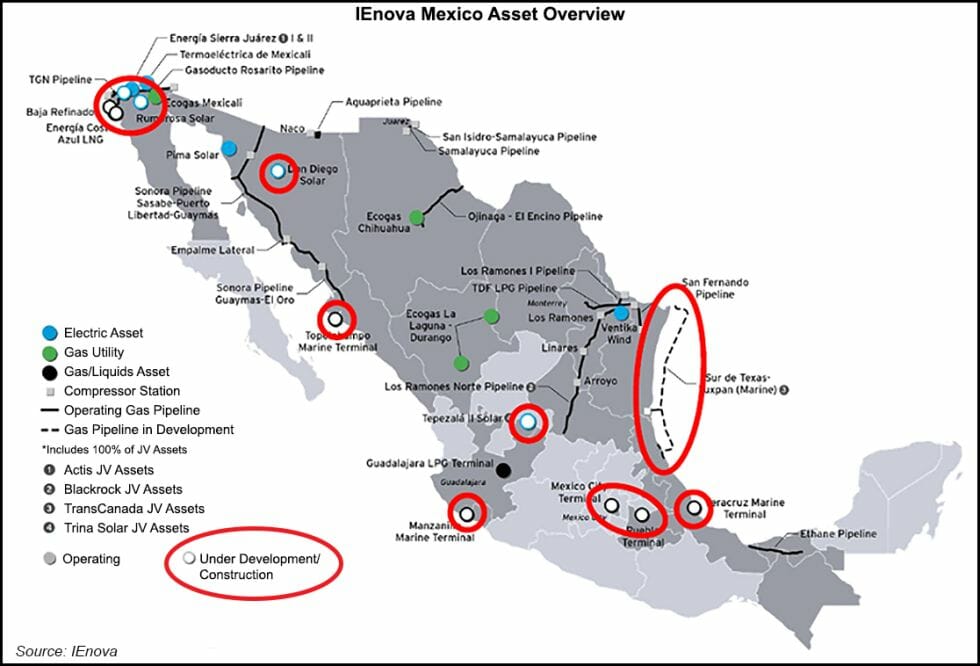 The two-phase ECA project is a joint venture between Sempra LNG & Midstream and Infraestructura EnergÃ©tica Nova (IEnova). It entails converting Sempra’s existing ECA import terminal into an export facility, a project on the drawing board for a long time.

Phase 1, for which Sempra expects to reach a final investment decision (FID) this year, would have an offtake capacity of roughly 2.4 million metric tons/year (mmty), while the current design of the second phase envisions roughly 12 mmty.

The project would supply LNG demand in the Asia Pacific region with U.S.-produced gas. Sempra plans to do so more cheaply and quickly than LNG exported from the U.S. Gulf Coast, which must traverse the Panama Canal to reach the Pacific Ocean.

“As you might expect, given its geographic privilege there is significant market interest in this project,” Bird said, citing that shipping times from ECA to Asia could be reduced by about half in comparison with the Gulf Coast.

“This reduction in time is significant because the cost of shipping LNG is a relatively high percentage of the total delivered cost of LNG, accounting for approximately 20% of the total cost, versus only 2% in shipping crude,” he said.

Sempra in 2018 signed a memorandum of understanding (MOU) with French major Total SA to offtake 4 MMty from ECA phase 2.

“We are in discussions with several parties with respect to their interest in this project,” Bird said. “In fact, market demand is so large that I’ve challenged our project team to look at opportunities, through innovation and technology, to increase the size and capacity” of the second phase.

Sempra also is working with regasification customer to expedite contracts, “so that we can bring forward in time the development of phase 2.”

CFE Trevor Mihalik also said Sempra plans to sell down its equity stake in both phases of the LNG project, from 100% to between 60-70%.

IEnova CEO Tania Ortiz Mena said a final investment decision (FID) for phase one is expected by year-end. IEnova and Sempra signed heads of agreement (HOA) in November with affiliates of Total, Mitsui & Co. Ltd., and Tokyo Gas Co., Ltd. for the full export capacity of the initial phase. TechnipFMC and Kiewit were selected as the engineering, production and construction (EPC) contractors.

Bird said “our teams are actively engaged” to convert the HOAs into definitive sales and purchase agreements, aka SPAs.

Although the project is in Mexico, it would export U.S.-produced gas, which is why it requires the DOE approval.

Ortiz and Sempra’s Carlos Ruiz SacristÃ¡n, North American Infrastructure chairman, said IEnova continues to work with Mexico authorities toward resuming operation of the Guaymas-El Oro section of IEnova’s Sonora pipeline system. Guaymas-El Oro has been inactive since August 2017, amid a dispute with a faction of the local Yaqui indigenous community.

IEnova and TransCanada Corp. are also joint developers of the 2.6 Bcf/d Sur de Texas-Tuxpan marine gas pipeline, which the consortium expects to enter operation early in the second quarter of this year. It would move U.S. gas south.

SacristÃ¡n highlighted that Mexico’s economy, the world’s 15th largest, is expected to double by 2040, and become the eighth largest by 2050. From 1990 to 2016, energy demand grew by 49.5%, outpacing total demand among Organization for Economic Cooperation and Development (OECD) countries, which grew by 16.4%, SacristÃ¡n said.

Per capita energy use in Mexico remains at less than 40% of the OECD average.

Demand for LNG, meanwhile, is projected to grow by 75% from 2019 through 2035, with Asia leading the growth, SacristÃ¡n said, citing projections from energy analyst Wood Mackenzie.

Demand for LNG is expected to begin outpacing supply in the mid-2020s, with U.S. gas expected to fill the majority of the shortfall, according to most analysts. By 2023, the United States is projected to become the world’s largest LNG supplier, SacristÃ¡n said.