Harnessing Monday’s bearish momentum that sent the March natural gas futures contract plummeting 69 cents to close at $5.445, traders were at it again on Tuesday, dropping the soon-to-expire contract below $5 before a late-session rebound. Physical natural gas prices got in on the act on Tuesday for Wednesday delivery, with most averages across the country retreating by a dollar or more. 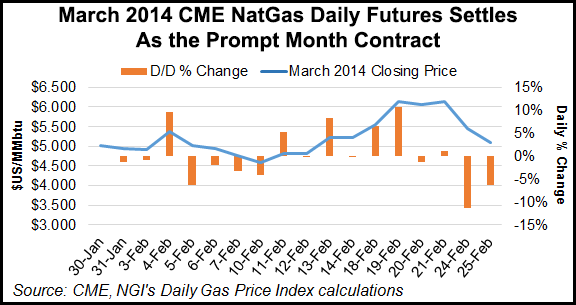 Monday’s move had market watchers scratching their heads, with reworked milder temperature forecasts and profit-taking ahead of Wednesday’s expiration the most often referred to culprits. The drop is also being scrutinized as it occurred as news was breaking that the American Public Gas Association has asked the Commodity Futures Trading Commission to look into a 10% price spike in the February Nymex Henry Hub contract during the final hours of trading on Jan. 29 (see Daily GPI, Feb. 25).

While a number of reasons behind the rapid descent were being bandied about in trading circles, a common source — a change in market fundamentals — had been acquitted from the case.

“The continued selling today has little to do with market fundamentals,” said Teri Viswanath, BNP Paribas director of commodity strategy. “Absent a back-stop in physical buying, financial profit-taking continues to pressure the front of the U.S. natural gas curve lower.

She said the market has witnessed a record depletion in storage, with the North American pipeline network likely to continue to encounter problems delivering gas next month.

“However, unlike 2003 when the late season rally was sustained [through] the expiry, spot purchases remain somewhat anemic so far this week as a result of current mild conditions,” Viswanath added. “We expect this pattern to change tomorrow as the now familiar pattern of polar intrusion from Canada re-emerges.”

“The natural gas market of the past few days is going to be worthy of more intense study to really understand what has driven the extreme volatility in the March contract,” Evans said. “At the very least we find it a challenge to efficient markets theory, that would posit the market was somehow fairly valued with respect to all known fundamental information both at the $6.49 high early in Monday’s session and at today’s $4.79 low. March futures have been a mess and we’re sure many will be happy to see the options expire today and the futures [Wednesday].”

Futures trading centered around the expiration of options on March futures as well as traders playing the ever-popular though highly volatile March-April spread. Options players anxious to see $5 March calls retain some premium were successful, with March managing to hold $5. April rose 7.1 cents to $4.691 and all other contracts posted gains ranging from about a penny to a nickel. April crude oil fell 99 cents to $101.83/bbl. Physical markets were off on average more than $1.25 but notable exceptions included Transco and Texas Eastern market areas as the pipeline wrestled with keeping nominations balanced with capacity.

Observers saw some last minute swings in the March-April spread as traders squared positions ahead of Wednesday’s March contract expiration. The volatility on the spread actually exceeded that of the March contract outright. At Monday’s settlement, March finished at $5.445 and April at $4.620, a titanic 82.5 cent differential. Following Tuesday’s trading that difference had contracted to 40.5 cents for a swing of 42.0 cents. March futures alone fell 34.9 cents. The appeal of spread trading is that exchanges typically require less margin than for outright positions allowing traders to get more bang for the buck.

“It looks like traders are playing the spread right down to the last minute,” said Jim Ritterbusch of Ritterbusch and Associates. “Once we get March off the board Wednesday, that volatility will compress considerably. The March contract has become a casino of its own. In earlier times things were more transparent, but now its difficult to say where all the trading is coming from.”

Weather analysts made some tweaks to their earlier forecasts. Commodity Weather Group in its morning six- to 10-day and 11- to 15-day outlooks was keeping a close eye on the impact of forecast storms on the incursion of widespread cold to the Midwest and Mid-Atlantic. “The models continue in solid agreement on one of the strongest cold starts to March in history, but a wrinkle early next week associated with storm track details continues to cause daily detail challenges,” said Matt Rogers, president of the firm.

“The trends recently have been to shift the storm track north and west to offer warmer risks to especially the Mid-Atlantic, but also to nearby areas of the eastern Midwest and Northeast briefly early next week. Other factors like the MJO [Madden Julian Oscillation] and global wind would suggest a colder, more suppressed track, so we need to keep a careful watch on the modeling. Otherwise, a cold-prevailing pattern persists deep into the 11-15 day. Widespread moderate and much below normal temperatures are expected again focused toward the Midwest, but there are still concerns for colder risks at times per the American modeling and the pattern type.”

Analysts also see little change to the forecast and note the resiliency of the April contract. “The March Nymex natural gas futures contract continued to slide lower overnight [Monday] on lighter-than-average volume of 21,000 contracts ahead of today’s expiration of March options,” said Addison Armstrong of Tradition Energy in a Tuesday morning note to clients. “However, the April contract and those months further out the board are trading higher as the March-April spread comes under pressure ahead of tomorrow’s contract expiration. Temperature forecasts are little-changed, with bitter cold still forecast to hit the Midcontinent and then spread to the South and East in the next 10 days. That pattern looks set to hold well in to March.”

In physical trading for Wednesday delivery the experience of the Northeast was similar to that of many points, and dollar-plus hits were the rule. At the Algonquin Citygates, gas for next-day delivery plunged $1.65 to $28.13, and gas on Iroquois Waddington fell $4.36 to $22.35. Deliveries to Tennessee Zone 6 200 L dropped $1.65 to $27.61.

Points enjoying connectivity to the rapidly depleting Dawn storage facilities that had earlier enjoyed super-sized gains saw the day’s largest losses. On Consumers, gas for Wednesday delivery fell $8.30 to $20.68, and on Michcon gas was quoted at $19.91, down $7.53. Gas on Northern Natural Ventura fell $8.97 to $20.38 and packages at the Chicago Citygates shed $2.75 to $16.66.

Points in and around the Philadelphia and New York metropolitan areas enjoyed gains as Transco imposed imbalance penalties and Tetco issued a stern reminder to shippers to keep volumes within tolerances.

Transco issues an operational flow order (OFO) and “recently provided notice that temperatures well below normal were forecasted for most of its market area and recommended all shippers manage their system requirements to ensure a concurrent balance of receipts and deliveries. In order to ensure system integrity, manage imbalances on its system and handle within-the-day volatility, effective with the beginning of gas day Wednesday, Feb. 26, 2014 Transco is issuing a system-wide Imbalance operational flow order.”

It said the OFO was directed to buyers (shippers) consistent with its tariff and imposed a minimum $50/Dth penalty.