Five requests to seismically survey parts of the Atlantic Ocean off the East Coast, a precursor to allowing oil and natural gas drilling, are once again under review by federal officials. 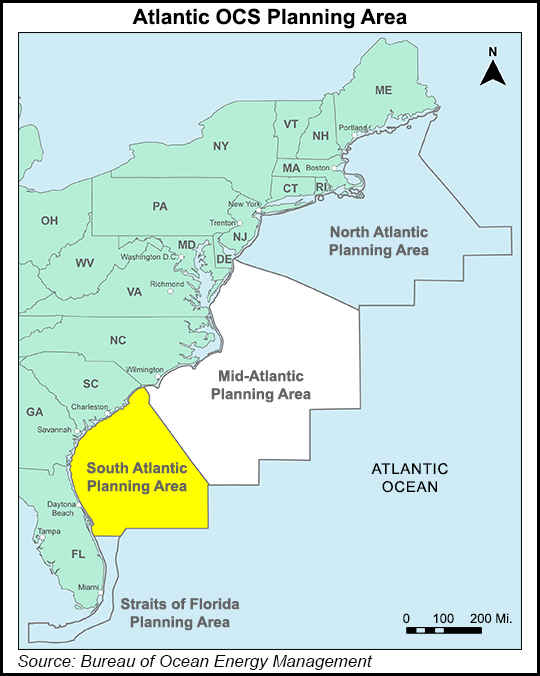 In a preliminary notice issued Monday, the Commerce Department’s National Marine Fisheries Service (NMFS) said it would take comments on a proposal to permit five operators to incidentally take marine mammals during Atlantic seismic surveys. Incidental harassment authorizations (IHA) are permitted under the Marine Mammal Protection Act, allowing takings that are not intentional during specific activities, such as authorized seismic surveys.

The Obama administration in mid-2014 gave the green light to using sonic sensors and air guns to explore for resources in Atlantic waters. The move followed the Bureau of Ocean Energy Management’s (BOEM) final review of geological and geophysical mitigation measures to protect marine life before surveys were performed, and it was done ahead of finalizing the 2017-2022 Outer Continental Shelf (OCS) federal lease program.

The actions were to pave the way for potential drilling off the East Coast. However, the Obama administration in January denied six pending applications that sought to conduct airgun seismic surveys, citing diminished need for surveys where coastal residents and regional lawmakers had protested drilling.

However, in May Interior Secretary Ryan Zinke followed President Trump’s lead and ordered a rewrite of the 2017-2022 OCS leasing plan, which among other things directed BOEM to work with the NMFS to expedite seismic survey requests, particularly new or resubmitted permit applications in the Atlantic.

“Why is seismic important?” Zinke asked at the time. “You can’t know what’s there unless you do seismic.”

The proposed survey activities would occur off the Atlantic Coast, within BOEM’s Mid-Atlantic and South Atlantic OCS planning areas (i.e., from Delaware to Cape Canaveral, FL), and out to 350 nautical miles.

Incidental takings are permitted by NMFS if they are found to have a negligible impact on a species/stock and would not have, in relevant circumstances, an “unmitigable” adverse impact on a species/stocks availability for subsistence. NMFS defines “negligible impact” as “an impact resulting from the specified activity that cannot be reasonably expected to, and is not reasonably likely to, adversely affect the species or stock through effects on annual rates of recruitment or survival.”

The notice regarding the seismic surveys is to be published on Tuesday in the Federal Register, with comments due within 30 days (No. 2017-11627). Comments may be addressed to Jolie Harrison, Chief, Permits and Conservation Division, Office of Protected Resources, NMFS, 1315 East-West Highway, Silver Spring, MD 20910; electronic comments may be sent to ITP.Laws@noaa.gov.

In response to the potential seismic testing, a loud chorus of criticism followed by environmental groups. Oceana warned the seismic blasting could threaten marine life and “industrialize” the Atlantic Coast.

Oceana said seismic airgun tests in the Atlantic may injure as many as 138,000 marine mammals while disturbing activities of millions more, based on federal estimates.

“This threat is real and it’s coming fast,” said Oceana campaign director Nancy Pyne. “Coastal communities have the most to lose, but unfortunately their overwhelming opposition may be ignored by the Trump administration. The threats of seismic airgun blasting alone are bad enough, but it’s also the first step to offshore drilling, which could lead to the industrialization of coastal communities” as well as the risk of a well blowout similar to BP plc’s 2010 Macondo disaster in the deepwater Gulf of Mexico.