Offshore driller Seadrill Management Ltd. during the second quarter continued to pare costs and defer delivery of newbuild rigs as much as possible. The company said it has disputed a recent contract termination by Petroleos Mexicanos (Pemex) for the West Pegasus rig and is reviewing its legal options. 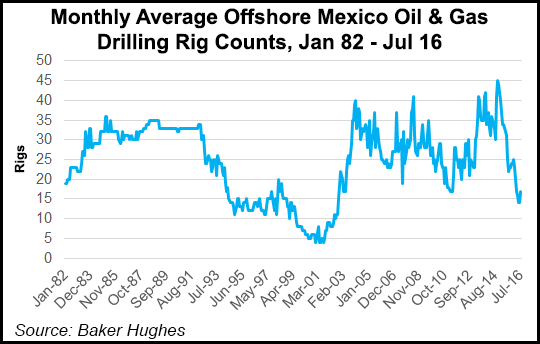 While the West Pegasus contract is in dispute, the West Castor rig secured a new one-year contract with Italy’s Eni S.p.A. to begin operating in Mexico this December, the company said.

The Castor contract is the first for an international operator in Mexico, said Anton Dibowitz, Seadrill chief commercial officer, during a conference call. “We’ve obviously been there [in Mexico] for a number of years working for Pemex, and I think that [Castor] contract is a testament to the fantastic operations that our team down there demonstrated.

“Pemex is on a journey to open up the market, and being that we have experience in the market is hopefully going to serve us well, and we expect that as that market opens up and more IOCs [international oil companies] come into that market, both on the jack-up and potentially on the deepwater side.”

Overall, though, times are still tough for drilling around the globe.

“There continues to be a significant supply overhang and the market conditions remain challenging, however, there is some volume returning to the spot market, although primarily for short term work,” said CEO Per Wullf during a conference call on Thursday.

“Oil prices stabilized in the $40-50 range during the quarter, and there is a growing belief that we are at or near the bottom of this downcycle. Decline curves have steepened and as oil companies begin to see the impacts of spending cuts over the last two years, there is a growing realization that the current level of investment is not sustainable and increased capital expenditure will be required to slow decline curves and grow production at some point.”

Wullf added, though, that offshore drilling “is a late-cycle market” and is still “highly challenging.” There are multiple rigs bidding for all opportunities out there, and there is a “significant” supply overhang, he said.

“Although scrapping and stacking activity is addressing some of this overhang, it is still unclear as to the timeframe over which rates will improve materially. A better indication of demand in 2017 may emerge from release of annual budgets later in the year.”

In talks with customers, the topic generally relates to “blend and extend” arrangements for contracts and other renegotiations,” Dibowitz said. “In some instances, rates are being negotiated lower without extending the contract term with cancellation and re-tendering by oil companies as the alternative,” he said. “Robust contract terms are increasingly important and many customers are keeping a watchful eye on performance metrics in an effort to find grounds to terminate.”

Some spot market and short-term work is showing up in the market for floating rigs, he said. But the dayrates available to drillers are at or near cash breakeven levels. “Given the available supply, operators have developed a clear preference for units that are currently operating or have not been idle for a significant period of time,” he said.

“High specification units continue to have an advantage over older units. The developing spot market is a step in the right direction and may indicate that we are close to or have reached the minimum number of active units required to sustain the degree of production decline that can be accepted by oil companies.”

The available fleet is likely to be pared in the months ahead by the scrapping of older rigs coming off contract that require significant spending to keep working, he said. Along with ongoing delays in newbuild deliveries, this is expected to help rebalance the market for floating rigs.

With shorter-term contracts, utilization levels of jack-up rigs tend to adjust more quickly than the floater market, he said.

“We have seen some limited activity begin to return; however, pricing remains challenging and, similar to the floater market, many units are competing for any available opportunity. Activity is focused in the Middle East and Southeast Asia both for short- and long-term contracts. High specification units continue to be preferred…

“Scrapping activity in the jack-up market is not as pronounced as in the floater market due to the low carrying cost of idle units. However the longer a unit is without work, the less desirable it becomes to an operator. Older units that have been idle for a year or more are expected to be at a significant disadvantage to currently operating or recently warm stacked units.”

Net operating income for the second quarter was $364 million, up from $328 million in the first quarter. The increase primarily reflects lower operating costs and overhead in the quarter, partially offset by lower revenues. Income was down from the $384 million seen in the year-ago quarter.