Schlumberger Ltd. has begun to rapidly pull idled hydraulic fracturing equipment off the stacks and is rehiring people in North America to build on a long-awaited recovery for the oil and gas business. 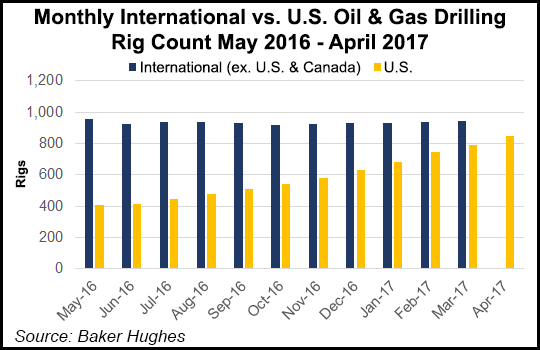 Oilfield spending should increase by 50% from 2016, led by the United States, which is “clearly” taking the lead in the recovery, CEO Paal Kibsgaard said Friday during the first quarter conference call.

Higher spending in turn will lead to “an overdue correction in service and product pricing,” he said. By the end of the year, all of the fracturing equipment now stacked should be back to work, as exploration and production (E&P) companies have given the all-clear signal to ramp up.

“In the first quarter, the North America land market continued to strengthen in terms of both activity and pricing, leading us to begin accelerating deployment of idle capacity for multiple product lines,” Kibsgaard said. “Revenue growth was led by hydraulic fracturing and drilling services, but was also increasingly supported by artificial lift, surface systems and valves and measurement.

“In spite of our capacity reactivation being heavily back-end loaded toward the end of the quarter as we continued to adhere to our profitable growth approach, we still generated 16% sequential revenue growth and 66% incremental margins in our hydraulic fracturing and directional drilling services in U.S. land.

“These results were driven by productive customer engagement around pricing recovery and operational efficiency, together with timely resource additions and proactive supply chain engagement.”

North American revenue led the way between January and March, rising 6% sequentially to $1.87 billion. Unconventional land activity accelerated in the first quarter, offset in part by a downtrodden U.S. Gulf of Mexico.

Among its projects underway in the U.S. onshore, Schlumberger’s WesternGeco completed acquisition of a 3-D wide-azimuth multi-client survey covering 253 square miles in the southern part of the Permian Basin in West Texas, bringing total coverage in the area to 655 square miles. The project, supported by the oil and gas industry, is expected to provide data to help operators improve the drilling and completions efficiencies in “challenging” parts of the basin.Also in West Texas, the drilling and measurements arm used a combination of technologies for Parsley Energy Inc. to increase drilling performance in long well laterals in the Midland and Delaware sub-basins. In drilling 80 wells over the past 12 months, Schlumberger said its PowerDrive Orbit rotary steerable systems and DynaForce drilling motors contributed to the 17% reduction in the average days required to drill a well compared with the previous year. Parsley was able to reduce average total drilling cost per lateral foot by 30%.

For Cabot Oil & Gas Corp. in the Marcellus Shale, Schlumberger’s bits and drilling tools arm used AxeBlade, a ridged diamond element bit technology, to improve the drilling rate of penetration in the tophole sands before reaching the Marcellus Shale formation. As a result, Cabot saved about $500,000 in 2016 based on a reduction of 13 hours of drilling time per well, Schlumberger noted.

In the Eagle Ford Shale in South Texas, a combination of technologies and services was used for Lonestar Resources to improve oil production and field economics in 18 wells. Using a combination of services, the wells produced up to 86% more hydrocarbon/1,000 feet of lateral compared to offset wells in two other fields.

A 13-well campaign by Whiting Petroleum Corp. in the Bakken Shale of North Dakota used Infinity, a dissolvable plug-and perforation system, to reduce cleanout times. Whiting planned to suspend production from several wells in the area while fracturing operations and post-fracture cleanout activities were performed.

Among the business segments, revenue declines were led by the Cameron Group, down 9% sequentially, from lower project volumes in offshore services and in particular, OneSubSea, which saw reduced product sales in the surface systems unit. Reservoir characterization group revenue also was off 3% sequentially because of a seasonal reduction in revenue for software integrated solutions and WesternGeco product lines.

Group revenues for the drilling and production groups each fell 1% sequentially, because even though there was strong growth in North American hydraulic fracturing and directional drilling activity, it failed to offset overseas declines.

While touting the growing strength of the market, Kibsgaard again warned that as the industry recovery is contingent on operators keeping their focus on “four critical areas” to restore their strength and capabilities. The most critical need, he said, is for E&P companies to boost their investments because global hydrocarbon demand is rising while oil and gas reserves are in decline.

The CEO also cited the need to protect and encourage investments in research and development “throughout the entire oil and gas value chain.” He also once again called for a revamp of the OFS business model to foster closer technical collaboration and commercial alignment between operators and suppliers. In addition, he cited the need for “broader and more integrated technology platforms” to combine hardware, software, data and expertise.

“While our view of the fundamentals of supply and demand in the oil markets remains constructive, the continuing underinvestment in new supply is increasing the likelihood of a medium-term supply deficit, as reservoirs are produced but reserves are not replaced in sufficient volume,” Kibsgaard said. “In particular, the market continues to focus on headline decline numbers, suggesting that production is holding up well. However, a closer examination of the underlying data clearly shows that the rate of depletion of proven developed reserves is rapidly accelerating” in several countries outside of OPEC, the Organization of the Petroleum Exporting Countries.

“As the recovery builds momentum, industry cash flow and productivity remain under pressure and limit the industry’s ability to increase present levels of E&P investment. At the same time, the value chain remains focused on trying to capture the limited value that is created, rather than seeking new ways to collectively create more value. This approach is not sustainable, either from addressing the underlying industry challenges or from ensuring that the future supply of hydrocarbons can meet the projected growth in demand.”

Schlumberger, he said, is “actively seeking to position the company at the forefront of an industry that needs to evolve. We are doing this by proactively managing our base business and responding to the ongoing pressures of commoditization, tailoring our offering and performance to the prevailing market conditions.”

At the same time he said the OFS leader would continue to expand its opportunity base by pursuing more mergers and acquisitions. In addition, the company is collaborating with customers to align business models and expand offerings, “from technical support to investing alongside our customers in their projects, all with the aim of driving more activity for our 19 product and service lines.

“As we continue to carefully navigate the current industry landscape, we remain confident and optimistic about the future of Schlumberger, knowing very well that beyond the current market challenges lies a wealth of opportunity for the industry players who are ready and able to think new and to act new.”

To that end is one of Schlumberger’s most anticipated new ventures, OneStim, its majority-owned (70-30) partnership with Weatherford International plc, which would combine their completions products and services for unconventional resource plays in North American land markets. The partnership, set to go head-to-head with pressure pumping leader Halliburton Co., would provide a broad suite of multistage completions services and create one of the largest hydraulic fracturing fleets in the industry.

Schlumberger continues to run its North American fracturing business separately, but the partners already have begun to integrate their offerings to prepare for the startup in the second half of the year. Kibsgaard said.

Other investments also continue. Even though the offshore business is underperforming, Schlumberger also paid $221 million during the quarter to take a minority interest in Borr Drilling, a Norwegian rig contractor, to expand its business in the offshore jack-up market.

Earlier this month it also joined with Argentina’s YPF SA to venture in a shale oil pilot in the Bandurria Sur Block of the Vaca Muerta in Neuquen, an emerging play that has drawn investments by ExxonMobil Corp., Royal Dutch Shell plc and Chevron Corp., among others. For a $390 million phased investment that would hand it a 49% stake, Schlumberger agreed to provide YPF with reservoir knowledge, integrated field studies, drilling/completion services and associated infrastructure.