Saudi Arabia’s state-owned oil and natural gas company is reportedly interested in making its first production investments outside the kingdom, and has inquired about purchasing unconventional assets in the United States — specifically, in the Permian Basin and the Eagle Ford Shale. 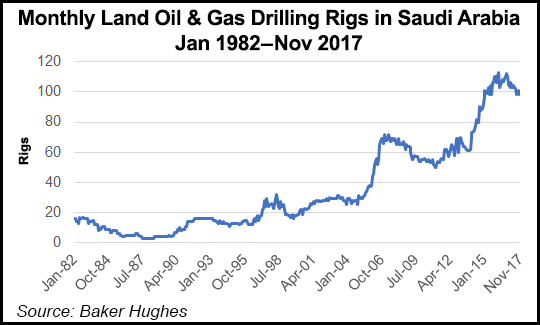 The Saudi Arabian Oil Co., aka Aramco, has also held initial talks with Tellurian Inc. over the possibility of either acquiring a stake in the Houston-based company or agreeing to purchase some of its fuel, sources told the Wall Street Journal for a report last week.

“Targeting the U.S. for properties is logical, for a number of reasons,” said NGI’s Patrick Rau, director of strategy and research. “For one, Aramco has a deep history with the U.S. — that’s the ‘Am’ in Aramco. Secondly, operating in the U.S. will give Aramco key access to the technology which they can then apply to their own shale reserves.

“Finally, having production in the U.S. gives them a cheap source of supply that they can ship back home, which makes their association with Tellurian all the more logical. Maybe that even explains why Tellurian is planning to build such an extensive network of pipelines to the Gulf Coast.”

Rau added that having better access to shale technology may also help Aramco become more efficient back home. “Saudi Arabia’s oil and gas production has increased over the years, but it’s taken a major surge in land rigs for them to do that,” he said. “That’s in direct opposition to what has been happening in North America.”

Another possible reason for the Saudis’ interest in foreign assets is the upcoming initial public offering (IPO) of Aramco, which is scheduled to take place in early 2018. Although the kingdom plans to initially offer 5% of the company for the IPO, Prince Alwaleed Bin Talal told CNBC last October that more of Aramco eventually may be publicly listed. Reuters also reported in October that China’s state-owned PetroChina and Sinopec had offered to buy the 5% stake in Aramco from the Saudis directly.

Saudi Arabia Finance Minister Mohammed Al-Jadaan said in an interview that company officials, as well as Saudi Crown Prince Mohammed bin Salman, have said the IPO “is on track,” but conceded that listing Aramco only on Tadawul, the kingdom’s stock exchange, was under consideration.

“We are still selecting our options,” Al-Jadaan told Bloomberg. “Tadawul is only one of the options. We are not ruling out any of these at this stage.

“We are going through a lot of discussions, a lot of assessments [and deciding] what is the best for the company. This is not a normal IPO — this is an IPO for the world. We need to make sure that we don’t leave any stone untouched and un-turned to ensure that we are doing what needs to be done to choose the right place.”

“That, of course, is a combination of price times quantity, and as a member of a cartel, Aramco doesn’t necessarily have the same control over its growth that the majors and independents do,” Rau said.