The recent attack on key oil infrastructure in Saudi Arabia demonstrated the muscle of North American oil and natural gas production, but it again tested the notion of energy independence and enduring exposure to global energy markets. 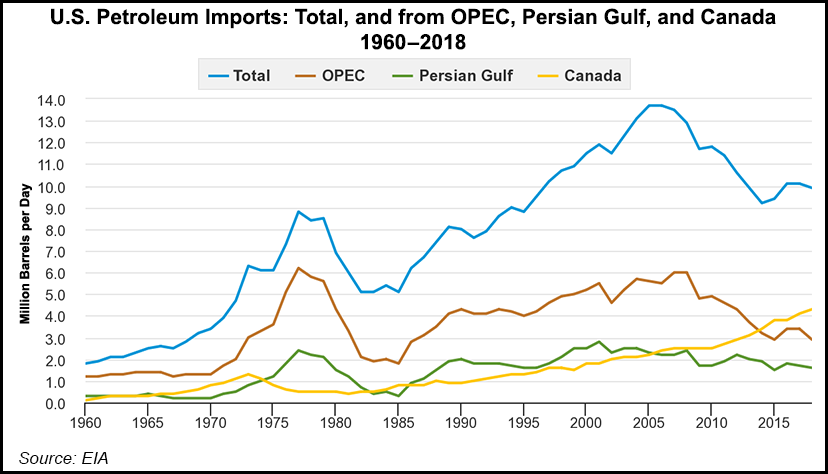 The drone and cruise missile attacks came at a time of surplus oil supplies worldwide, thanks in part to booming domestic crude production, which has thus far insulated the U.S. economy from a harsher blow. Oil prices saw their sharpest increase in the last decade after strikes on the Abqaiq processing facility and Khurais oilfield on Sept. 14, but they’ve fallen since and failed to climb back up. Meanwhile, U.S. gasoline prices have increased by roughly 10 cents/gallon and averaged $2.65 on Monday.

“Had this attack happened 10 years ago, my god, we would have easily seen a $10 or $20 move” in crude prices, said Refinitiv’s Carl Larry, commodities performance director. Larry told NGI’s Shale Daily that U.S. energy production “has made a difference” since the attacks, but for how much longer it can help soften the blow is unclear.

While most analysts were surprised by the market’s muted reaction to what was billed as the worst supply disruption in history, the actual impacts might not be evident for some time. The attack knocked out roughly half of the kingdom’s 12 million b/d capacity. While most of that has reportedly been restored, a claim that has drawn skepticism, other questions loom.

In order to fulfill its obligations, Saudi Arabian Oil Co., aka Aramco, has cranked up production from other fields not connected to the Abqaiq facility, drawn down storage inventories, asked customers to take heavy crude rather than the light grade disrupted by the strikes, and imported oil from neighboring countries. Aramco has been depleting its spare capacity, volumes that can be brought online quickly, in the process.

Prices could eventually increase as supplies tighten, which would also limit the market’s ability to absorb the effects of another attack or a natural disaster. While it’s been questioned before, the reality of the situation has undermined the idea of American energy independence that’s been trumpeted frequently in recent years.

“Additional disruptions could have an impact, and those things could impact the United States to the extent that the Saudis are not putting as much of their light crude on the market,” said Center for Strategic and International Studies’ Sarah Ladislaw, director of the Energy and National Security Program.

“There could be a higher call for U.S. crude — light crude coming out of the Permian Basin in particular — which could increase the prices in the United States, and to the extent that Brent prices increase, that usually is a good indicator of what increases gasoline prices here in the U.S. as well,” she told NGI’s Shale Daily.

Increasing fuel prices threaten a global economy already under pressure, particularly as the trade war between the United States and China drags on. Moreover, higher energy prices at home could cut into discretionary income and dent consumer spending.

“The oil market is a single global market, and it’s the most traded commodity on earth, so when there’s a disturbance in that market, no matter where it takes place, it really affects prices everywhere,” Rice University’s Jim Krane, a Middle East energy expert at the Baker Institute, told NGI’s Shale Daily.

The United States has long exported coal, and in 2017 it began exporting more natural gas than it imports. However, the country is not self-reliant when it comes to oil. Last year, U.S. petroleum production, including crude oil, gasoline and diesel fuel, among other things, averaged 17.71 million b/d, according to the Energy Information Administration (EIA), with consumption averaging around 20.45 million b/d.

Saudi Arabia’s oil, and in particular spare capacity, is the backbone of its political power and the linchpin of its strong relationship with the U.S. government. “The U.S. calls on the Saudis to bring their spare capacity on stream” when markets are disrupted by geopolitical and other events, Krane said.

“As I like to say, Saudi Arabia helps to protect the U.S. motorist from U.S. foreign policy,” he added. “It would be pretty hard to slap sanctions on Iran or Venezuela if it forced gasoline prices up to $5/gallon.”

The attacks also demonstrated the limited ability of U.S. producers to bring on supplies quickly. If producers respond to higher prices, it would take months before volumes increased given the time it takes to turn wells online. Pipeline constraints and pressure from investors to cut spending are factors as well.

“We don’t have what the Saudis have; we don’t have spare oil capacity that’s connected up to the system,” Krane said.

Even still, rising American energy production has emboldened the country’s foreign policy in the Middle East and elsewhere.

Ladislaw said there’s no doubt that President Trump’s move in 2015 to withdraw the United States from a six-nation nuclear arms control deal with Iran has strained foreign relations and precipitated a series of crises in the region, which have included the downing of a U.S. drone and seizing oil tankers.

“However, it is really clear in a number of instances that having well supplied oil markets, feeling like the United States is much more supplied, has made the administration feel free to act in a number of ways when it comes to economic statecraft, and by that I mean sanctions and even some of these trade disputes,” she said.

Trump hasn’t been the only one to strengthen his hand in the Middle East, as the Obama administration had a similar tack.

The Saudi attacks also laid bare the growing strength of the United States’ role as a global supplier and a strong competitor in the energy supply chain. On the day of the strikes, Saudi officials said natural gas liquids (NGL) production had been cut by 50%. Those volumes were reportedly restored, but the outage offered a glimpse of the strength U.S. petrochemical producers have gained from low-cost ethane and other NGLs produced in the Lower 48.

Asia also accounts for more than 70% of the Saudi’s crude exports. China, the world’s largest oil importer, accounts for the bulk of those volumes, followed by Japan and South Korea. Larry said the U.S. could ultimately increase exports to fill the gap of lost Saudi crude, which could give leverage in trade talks with China. For now, that seems unlikely.

“Stable energy economics are part of America now,” Larry said, adding that the supply disruption was “unprecedented” and more of a shock to global markets. But the U.S. is not immune. He said a risk premium, however large or small, is likely to be baked into crude prices going forward.

“The risk premium has to stay in because nobody expected this to happen, and we never will know what to expect, but it can happen.”