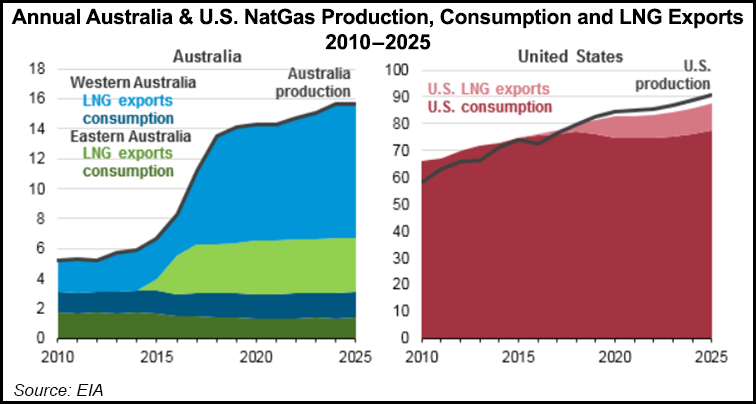 The Australian explorer said the Corvus-2 well about 56 miles northwest of Dampier, targeting the Carnarvon Basin, reached a total depth of about 13,117 feet and intersected a gross interval of 2,098 feet. Santos claimed the discovery to be among the largest columns ever across the North West Shelf.

Santos said wireline logging to date has confirmed a net pay zone of about 804 feet across target reservoirs in the North Rankin and Mungaroo formations, at depths between 11,023 and 13,117 feet.

“Corvus-2 has delivered a fantastic result and has opened up a number of additional exploration opportunities in the region,” said CEO Kevin Gallagher. “It is particularly exciting to have realized a higher liquids content and significantly bigger resource volume than we expected.”

Wood Mackenzie senior analyst Daniel Toleman said based on the limited information, the Corvus field contains 2.5 Tcf and 25 million bbl of condensate, which would be the “largest gas discovery in the Carnarvon Basin since the Satyr-4 exploration well drilled by Chevron in 2009.”

Initial pressure sampling from Corvus-2 showed higher permeability zones than those seen at its Corvus-1 well less than two miles to the northeast. Compared to Corvus-1, initial samples in Corvus-2 show a condensate-to-gas ratio of up to 10 bbl/MMcf.

Gallagher said natural gas from the Corvus field could be tied back to either its onshore Devil Creek gas processing plant near Karratha or to an offshore gas processing plant on Varanus Island. Either option “has the potential to increase the utilization of our existing facilities as well as provide backfill and extend plateau well into the 2030s.”

Toleman said Santos management has suggested Corvus could supply Australia’s market, but if the field holds more than 2 Tcf, the operator could “explore opportunities to export the gas as LNG. This is due to Corvus’ proximity to the Burrup Peninsula, and a well supplied domestic market in the short-to-medium term.

“The North West Shelf has LNG production capacity available from 2021,” Toleman said “The Corvus discovery could fill this ullage. If an LNG backfill development is to progress, we expect Santos will look to sell down, as it currently holds 100% in the find. One of the North West Shelf partners would be a logical entrant.”

The International Gas Union noted earlier this month that global LNG trade hit a record for the fifth consecutive year, reaching 316.5 million metric tons (mmt) in 2018. While the largest increase in LNG exports came from Australia, which rose by 12.2 mmt, the United States added 8.2 mmt.