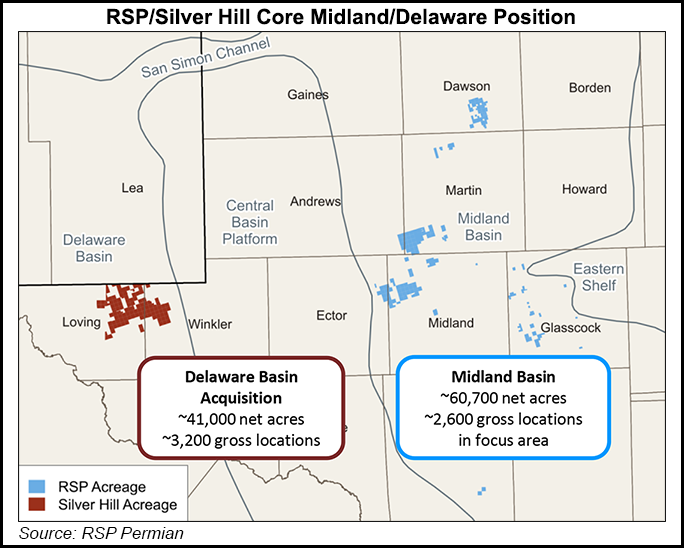 Dallas-based RSP, which to date has been strictly a Midland sub-basin player, agreed to take over the privately held partnership and Silver Hill E&P II LLC for $1.25 billion in cash and 31 million shares of common stock. The entities are controlled by affiliates of Kayne Anderson Capital Advisors LP and Ridgemont Equity Partners, which would become RSP’s biggest shareholders once the deal is done.

The Silver Hill assets “compare favorably with our existing prospects and rank in the top of our combined drilling inventory, with returns consistent with our Midland Basin targets,” CEO Steve Gray said during a conference call Friday morning.

According to estimates by energy analysts, RSP paid around $46,000-47,000/acre for the leasehold.

“I know a lot of people may be surprised at the prices that the assets in the Delaware Basin are starting to command, but as we have studied the basin over the last two years it is becoming obvious that the wells are getting better, costs are coming down and returns are increasing as operators delineate the best landing zones and improve their completion methods,” Gray said.

“The big thing that stands out to me is how thick the interval here is versus our Midland Basin assets. The pay here is roughly twice as thick as in the Midland Basin and therefore, it can support more wells per section. Because of the thickness, our estimated cost per location and estimated cost per barrel of reserves acquired is actually lower here than in deals that we have purchased previously over the last few years.”

Enough oil and gas pipeline takeaway capacity exists today, and there is adequate natural gas processing and water infrastructure now in place across the Delaware, Gray said. However, as development expands in the next year or so, “we will probably run about as many rigs in the Delaware as we run in the Midland, or in other words, we’ll have a balanced drilling budget directing half of our capital to each basin.”

The Silver Hill transaction “creates a compelling growth platform with the highest-quality assets in the core of both the Midland and Delaware basins that each exhibit strong returns and have substantial combined upside,” he said. “The Silver Hill team has done an incredible job of demonstrating the vast potential of the asset base with strong results across multiple horizontal zones.”

Silver Hill, also based in Dallas, was created in 2011 and formally capitalized in September 2012 in partnership with Kayne Anderson, management and several private investors. Bidding for Silver Hill entities had been had been high, with Diamondback Energy Inc. recently considered a frontrunner (see Shale Daily,Oct. 10).

However, RSP has been “patient” in its merger and acquisition efforts, Gray said, “to ensure that we pursue accretive opportunities for our shareholders that enhance our already deep inventory of high-return horizontal locations. We believe the assets of Silver Hill are located in the best part of the Delaware Basin and will be a perfect complement to our existing asset base.”

Most of RSP’s acreage today is in Midland, Martin, Andrews, Glasscock, Ector and Dawson counties. The Silver Hill acquisition all together would give it more than 100,000 net surface acres, 3,600-plus net drilling locations, with 50,000 boe/d of production. More than 80% of the Silver Hill acreage would be operated, with average working interest of 83%. Most of the acreage already is held by production. Production is 69% weighted to oil, with two operated horizontal rigs currently drilling.

The combined RSP, Silver Hill inventory would be spread across multiple horizontal stacked-pay zones, including the Wolfcamp B, Upper/Lower Wolfcamp A, Second/Third Bone Spring, Avalon and Brushy Canyon. Estimated ultimate recoveries per well of 1 million boe is “common across the acreage position, based on management’s estimates” and using average lateral lengths of 6,400 feet.

“The returns on Silver Hill’s horizontal wells compare favorably with our Midland Basin assets and generally rank in the top quartile of our drilling inventory,” Gray said.

Based on strong well performance from its existing asset base, and disregarding the partial contribution from Silver Hill before year’s end, RSP has increased its 2016 production guidance. RSP now is producing 35,000 boe/d, and it expects 2016 output to average 28,500-29,500 boe/d, 5% above the midpoint of previous guidance and 16% above original guidance.

To help pay for the Silver Hill acquisition, RSP has launched a public offering of 20 million shares of its common stock and granted the underwriters a 30-day option to purchase up to three million more shares. If the acquisition is not completed, net proceeds would be used for general corporate purposes, which may include funding a portion of the 2017 capital budget.

The two transactions are to be completed separately, with the partnership transaction to close by the end of this year for $604 million cash and 15 million RSP shares. The E&P unit’s sale is set to close in early 2017, with RSP trading $646 million cash and 16 million shares. Kayne Anderson, Ridgemont and other Silver Hill shareholders collectively would own 20% of RSP’s outstanding shares pro forma. In addition, Silver Hill CEO Kyle D. Miller would join the board.

“Silver Hill has assembled one of the largest and most attractive privately owned acreage positions in the core of the Delaware Basin,” Miller said. “We have long-standing relationships with the RSP management team and recognize the significant value they have created for investors through their technical leadership, efficient operations and adherence to a focused strategy. We believe RSP is the perfect fit for Silver Hill given their excellent track record, their superior assets in the Midland Basin and their experienced management team.”

According to Coker Palmer Institutional (CPI), the “nosebleed” implied valuation of the transaction is $46,000/acre because since early 2015, exploration and production (E&P) companies were paying on average $25,000/acre for Midland transactions and $15,000/acre for Delaware leaseholds.

“For example, many companies assume a range of eight to as high as 52 wells/section. Thus, previous deals might have assumed eight to 16 wells/section” and now are pushing 30-plus. This increased number of wells pushes up the ‘per acre’ price,” and prices could go “quite high…as long as oil prices are slowly rising and as long as companies do not significantly lever up to buy property.”

Tudor, Pickering, Holt & Co. estimated RSP paid $47,000/acre in the deal, “fairly valued” on current well control, based on analysts forecast for $60-65 West Texas Intermediate. “Additionally, we see a blue sky upside case in the core acreage in Loving County, which is inclusive of multiple benches in the oily Avalon, additional Bone Spring delineation, and shallow Brushy Canyon targets, which would allow for potential for more than 60 wells/section being underwritten.”