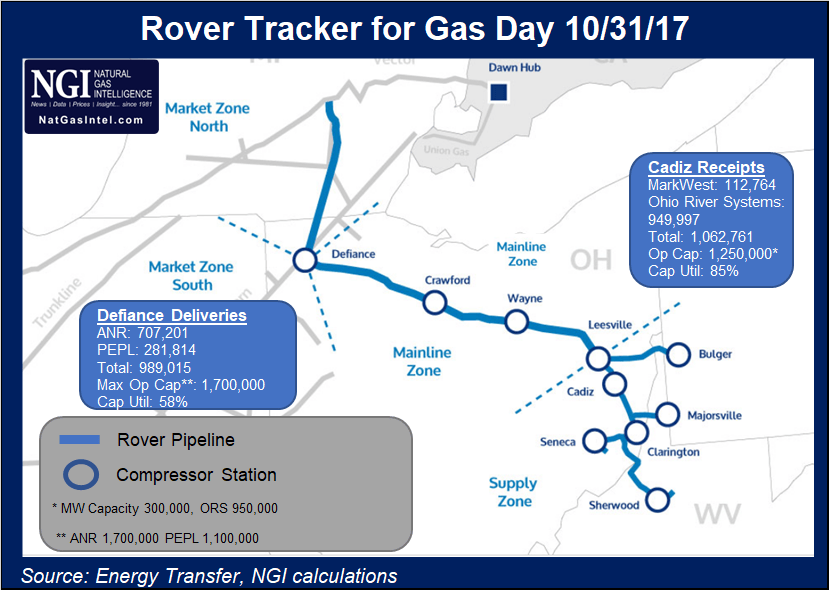 In a request filed Monday, Rover asked the Federal Energy Regulatory Commission to approve an alternative to the APM tool being used for the 713-mile natural gas pipeline’s remaining HDDs [CP15-93].

Because of challenges associated with the wireline disconnecting from the downhole apparatus, or grounding out to the drill stem during reaming operations, using the APM tool has resulted in 18.2-74.5% downtime per HDD every week, Rover wrote.

Rover asked FERC to review and approve a proposed alternative monitoring protocol for the remaining HDDs to avoid using the APM tool.

FERC approved that request on Tuesday. Citing reviews from staff and third-party expertise provided by J.D. Hair & Associates Inc., FERC said, “We find that the alternative you propose is justified and reasonable and will provide necessary protection to waterbodies and other resources during HDD activities.”

FERC has been scrutinizing Rover’s HDD practices ever since a roughly two million gallon inadvertent release of drilling fluids occurred earlier this year during project construction near the Tuscarawas River in Stark County, OH. The incident prompted FERC to halt work on all new HDDs, leading to delays for the takeaway pipeline. FERC has since allowed work to resume at some HDDs.

Rover sponsor Energy Transfer Partners LP now anticipates bringing Phase 1B online by the end of the year. That would include connections to additional supply points on the eastern end of its Mainline A. Designed to eventually deliver 3.25 Bcf/d to markets in the Midwest, Gulf Coast and Canada, Rover is expected to have a major impact on flows out of the constrained Appalachian Basin once fully online. Full service is expected by the end of March.

After starting partial service Sept. 1, the pipeline’s impact is already being felt. Rover has been flowing about 1 Bcf/d east-to-west from Cadiz, OH, to interconnects with Panhandle Eastern and ANR in northwest Ohio. Some portion of the Rover volumes unloaded onto ANR are even finding their way down to Cheniere Energy Inc.’s Sabine Pass liquefied natural gas export terminal, according to a recent analysis from RBN Energy LLC.