The Interior Department’s plans to rescind most of an Obama-era rule governing associated natural gas flaring and venting on public and tribal lands is welcome news for operators of marginal, aka stripper, wells on such lands. Oil and gas industry experts and analysts say the rescission could save smaller operators’ livelihoods and spare tens of thousands of wells from becoming uneconomical and shut in. 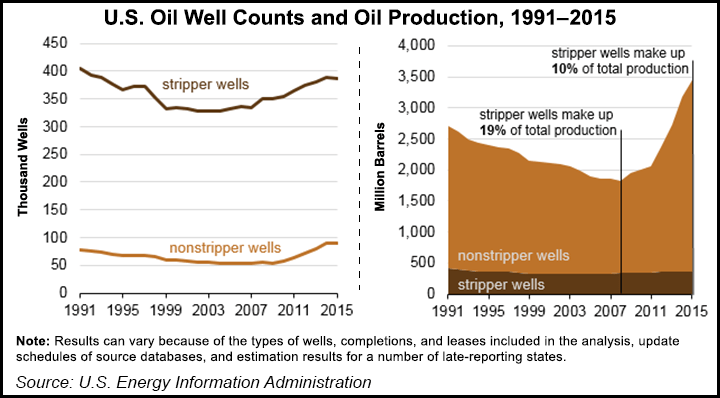 Last month, Interior’s Bureau of Land Management (BLM) announced that it would rescind most provisions of its Waste Prevention, Production Subject to Royalties, and Resource Conservation Rule, aka the venting and flaring rule. For the remaining parts, BLM said it plans to return to the regulatory environment that preceded the Obama-era rule when it came out in 2016.

BLM said approximately 73% of wells on leases it administers, about 69,000 wells in total, are considered marginal. The bureau arrived at that number after applying estimates from the Interstate Oil and Gas Compact Commission (IOGCC) and the U.S. Energy Information Administration (EIA), which have slightly different definitions for marginal wells.

“It’s generally very welcome news for the U.S. oil and gas industry as a whole, particularly for our Permian Basin brethren in New Mexico who are impacted much more significantly than the industry is in Texas,” Longanecker told NGI’s Shale Daily. “Overbearing regulations in general could make the difference of a marginal well being economical or forcing the operator to shut in the well.”

Longanecker added that the rollback “is really a representation of the continued commitment by the administration to work cooperatively with the states to help provide regulatory certainty for our industry, and to do away with unnecessary, duplicative or onerous regulations at the federal level as part of President Trump’s American energy dominance agenda.”

According to Longanecker, there are approximately 130,000 marginal wells in Texas, which collectively account for 10-15% of the state’s total annual production of oil and natural gas. But most of the marginal wells won’t be affected by the rule, since only 1-2% of the land in Texas is owned by the federal government.

Western Energy Alliance President Kathleen Sgamma said an economist with the organization estimated that the original rule would have shut in 112.4 million bbl of crude oil because the marginal wells would have been abandoned. Although the economist estimated the oil was worth $6.1 million, Sgamma said oil prices at the time were about half of what they are today.

“The new rule recognizes that marginal wells can become economically unviable if new rules are too costly, and also that they have a low potential to emit, commensurate with their low production,” Sgamma said.

EIA also reported that there were an estimated 380,000 marginal oil wells operating at the end of 2015, and that they accounted for 10% of U.S. oil production that year, down from a high of 19% in 2008. The agency attributed the decline to “the large increase of production volume from very prolific wells drilled in shale and tight oil formations with enhanced completion techniques.”

Longanecker said TIPRO was “working on a similar path” over how proposed changes to the Environmental Protection Agency’s (EPA) New Source Performance Standards (NSPS) would impact marginal wells. EPA has said the changes would reduce duplicative regulation with states and save the industry about $484 million in regulatory costs over seven years.

“We’ve had a consistent call for the exclusion of low production well sites under those regulations, given the significant difference in production and reservoir pressure, compared to higher volume wells,” Longanecker said. “We’ve consistently said that low production wells should have never been subjected to the same requirements under the NSPS.”

Longanecker added that Interior “has little or no authority to regulate air quality.” That’s the domain of the EPA and the Texas Commission on Environment Quality, he said. Meanwhile, the Texas Railroad Commission (RRC) has jurisdiction over venting and flaring.

“RRC typically approves requests for up to 180 days of flaring natural gas, which is expected to be a sufficient amount of time for operators to address transportation needs,” Longanecker said. “Beyond that, without an exemption, gas must be piped away or the well shut in. This issue is of particular importance in West Texas with some of the takeaway capacity issues they are facing.”

In a 12-page report last month, analysts with ClearView Energy Partners LLC said BLM argued that a “large proportion” of marginal wells on federal lands were “unduly affected by the [2016 rule’s] prescriptive requirements.” There was also significant regulatory overlap from EPA, states and tribal governments.

“Although the agency acknowledges the existence of exemptions in the [2016 rule], BLM argues that the standards that justified exemptions were unduly strict — the test was whether compliance obligations would result in a shut-in of the well in question — and therefore inadequate,” ClearView said. “The BLM further states that even approving for exemptions could undermine the economics of marginal wells.”