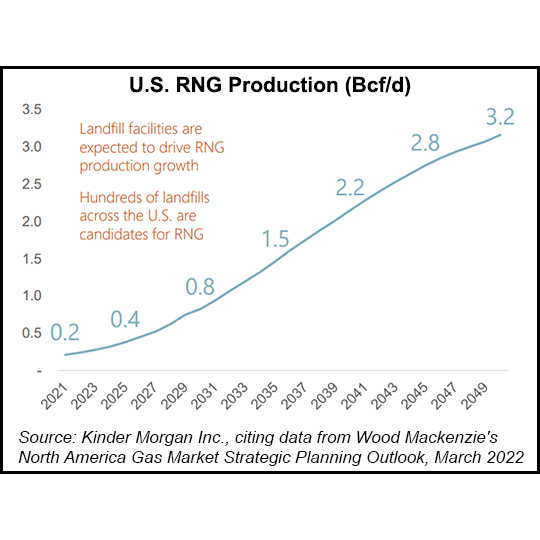 In the third quarter, the largest U.S. RNG producer and supplier and Amazon, the world’s second-largest retail company, celebrated the opening of an RNG station in Groveport, OH, “that will allow more than 50 Amazon Class A trucks to fuel at the same time,” CLNE CEO Andrew Littlefair said. He discussed the opening in the third quarter earnings results.

The “state-of-the-art fueling facility,” which opened in late September, has the capacity to dispense about 700,000 gasoline gallon equivalent (GGE) of RNG to fuel Amazon’s delivery trucks.

“Plans to expand the site and increase the capacity to be able to accommodate 84 Amazon trucks are already in the works,” Littlefair said.

Amazon and CLNE also plan to construct another 19 RNG fueling stations across the United States. Illinois, Pennsylvania and Florida are on schedule to have stations flowing RNG by the end of November, Littlefair said.

CLNE in the latest quarter also signed a three-year agreement to expand an existing partnership with Waste Management for three more fueling station projects. This would bring CLNE’s total RNG stations in the United States and Canada to 96.

Across its partnerships with trucking fleets, CLNE management noted that supply chain constraints have been a factor impacting operations, though that has not slowed growth in RNG adoption.

“It’s true that these fleets are struggling with lots of things,” said Littlefair. “They’re looking at uncertainties in the economy, inflation pressures, employee shortages and supply chain. So, it hasn’t been business-as-usual for trucking companies.”

In the third quarter, however, “…the good news is, freight was up and the economy was fairly strong, but there’s a lot on their mind, so I would say they’re being cautious. We’re asking somebody to go out and buy a brand new truck.

“…These fleets replace, and are on normal replacement cycles, so it’s not like we’re asking them to do something they wouldn’t otherwise be doing. And yet at the same time, they’re all facing an ever-increasing pressure on their climate reduction goals and sustainability goals, so we find them to be very open, and we’re having very meaningful discussions,” Littlefair told investors.

Waste Management, for example, has about one-third of its fleet running on RNG. The waste hauling giant has committed to reduce by 2032 its direct and indirect emissions by 42%.

Meanwhile, CLNE plans to “…complete 27 station projects this year for our refuse, transit, trucking and airport customers, Littlefair said. An  additional 43 stations are in some stage of the construction process…

“RNG continues to be a big winner for us, with volumes growing 28% in the quarter compared to last year and great progress on RNG supply projects at dairies, which will help us meet continued demand,” Littlefair said.

In 3Q2022, CLNE sold 54.1 million GGEs of RNG, compared with 42.2 million in the year-ago period. The California-based firm noted that all RNG volumes were sourced from third-party suppliers.

In terms of production, CLNE is “on track” with “seven, and soon to be eight projects…under construction, and a like number ready to enter the construction process,” the CEO said. Another seven projects are prepared for development and engineering, and “in addition to those, 20 more in the pipeline.”

On average, CLNE’s biogas projects typically take roughly 18 months before beginning production. It takes another four to six months for the California Air Resources Board to begin distributing low carbon fuel standards credits for every gallon of RNG produced at one CLNE facility, Littlefair noted.

CLNE’s RNG digester at the Del Rio Dairy in Friona, TX, which had been scheduled to come online by the end of the year, has faced some slight delays, mostly related to supply chain issues, said CFO Robert Reiland. The facility is now expected to come online early in 2023.

Pasha is expanding its fleet with two additional LNG-powered vessels, expected to be ready for use in May and October, Littlefair noted. The ships could require another 125 million GGE of LNG from the Boron plant.

In September, CLNE also sought to  expand its Boron LNG plant with a third production train. The addition could increase capacity by about 50%.

CLNE sold 19.3 million GGEs of conventional natural gas in 3Q2022, down from 21.7 million GGE in the comparable quarter last year.

“The increase in this quarter’s revenue is mostly driven by the growth in our fuels volumes, as well as two additional quarters” of the alternative fuels tax credit extended by the passage of the Inflation Reduction Act (IRA) in August, Littlefair said. The tax credits generated $16.1 million in the last quarter, up from $5.3 million in 3Q2021.

The IRA provides “assurance that for the next several years, RNG transportation fuel will be rewarded with a 50 cent/gallon credit,” Littlefair said. “There were other incentives in the IRA which should help the expansion and adoption of RNG as well. A new and significant tax credit of up to 30% for qualified biogas projects like our current and future RNG digesters and dairies was in the legislation. And the clean fuels production tax credit in the bill provides a credit for low emissions transportation fuels like RNG.”.

“The real story” of the third quarter, “was really, we did see a squeeze on fuel margins, due to what some might say is a historic spike in natural gas costs that persisted for two-thirds of the quarter,” the CFO said. “Since oil and diesel prices were flat to lower in that period, we did not have as much room to raise our fuel prices. So, our underlying fuel margins did get squeezed.”