Led by the Permian Basin, an uptick in drilling activity during the week ended Friday (Dec. 18) saw the U.S. rig count rise eight units to 346, according to the latest figures published by oilfield services provider Baker Hughes Co. (BKR). 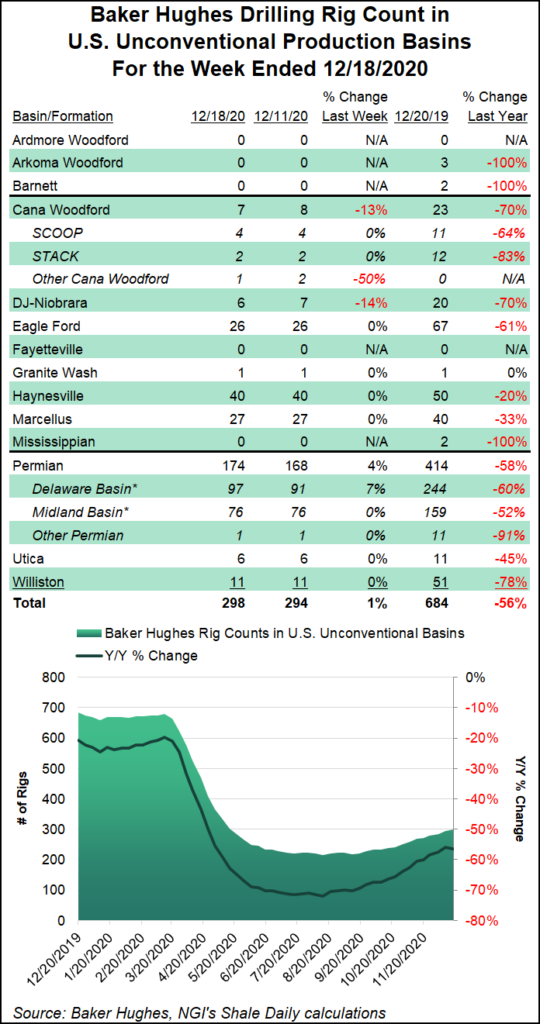 Changes in the United States for the week included the addition of five oil-directed rigs and two natural gas-directed, along with one miscellaneous unit, according to the BKR numbers, which are based on data provided in part by Enverus Drillinginfo.

While the recent trend in domestic drilling activity has been decidedly upward, the combined U.S. count as of Friday still lagged its year-ago total of 813 by more than 450 rigs.

Land drilling increased by five week/week, while the Gulf of Mexico added three rigs to grow its count to 16, down from 24 a year ago. Directional rigs increased by four, while horizontal rigs and vertical rigs each increased by two.

The Canadian rig count fell nine units overall for the week to 102, versus 149 a year ago. A two-rig increase in gas-directed drilling there was offset by a net loss of 11 oil-directed units.

The North American rig count finished the week at 448, down from 962 in the year-ago period.

Among major plays, the increase in activity for the week was concentrated in the Permian, where six rigs returned to action to grow the southeastern New Mexico and West Texas play’s total to 174. That’s still well shy of the 414 rigs running there at this time last year, BKR data show.

Elsewhere among plays, the Cana Woodford and Denver Julesburg-Niobrara each saw one rig depart for the week.

Broken down by state, New Mexico saw a net increase of six rigs for the week, while Texas added three overall. Wyoming saw a net decline of one rig for the week.

The voluntary bankruptcies by U.S. exploration operators have continued to mount, with Lower 48 oil production by the insolvent companies set to decrease from current volumes by around 25%, or 200,000 b/d, at the end of 2021, according to a recent Rystad Energy analysis.

“Operated oil production from the recent Chapter 11 filings is heavily weighted in the Eagle Ford and Bakken regions, at almost 400,000 b/d,” analysts said.

Although the play is much bigger, Permian-focused exploration and production companies now going through restructuring only produce around 80,000 b/d total, the review found.

Meanwhile, the International Energy Agency (IEA) said earlier in the week in its Oil Markets Report for December that it lowered its demand estimate for this year by 50,000 b/d and its projection for next year by 170,000 b/d.

Citing pandemic-induced travel restrictions that continue to curb demand for jet fuel and gasoline in Europe and the United States, the Paris-based watchdog said 2020 oil demand would fall 8.8 million b/d when compared to 2019, to 91.2 million b/d, while 2021 consumption would increase by an estimated 5.7 million b/d.