Permian Basin explorer Ring Energy Inc. has increased its capital spending for 2018 by nearly 25% as it builds out infrastructure in the Delaware sub-basin and Central Basin Platform (CBP) to deliver more natural gas and oil to market. 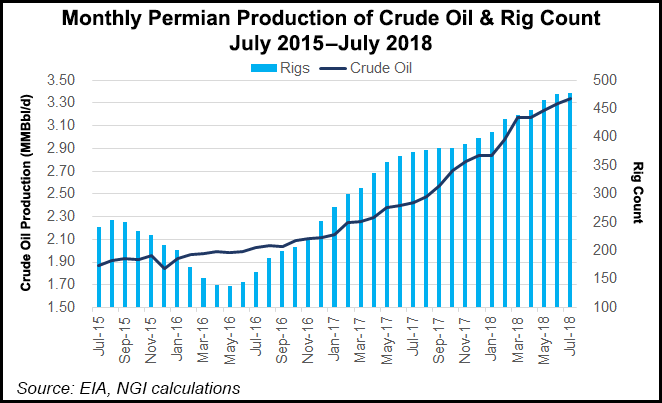 The Midland, TX-based producer’s capital expenditures (capex) were adjusted to $197 million, a $47 million increase from the initial budget, with the additional capex funded primarily through cash flow.

“The capex budget increase will allow us to maintain an aggressive drilling and development program through the remainder of 2018,” CEO Kelly Hoffman said. “We continue to have no product takeaway issues and stay in constant contact with our purchasers and brokers who assist us with that process.”

Because of the price differentials that Permian operators are experiencing, “we choose not to focus on benchmark prices, but actual prices received,” he said. “For example, at $50/boe received on our one-mile laterals, our estimated internal rate of return is approximately 80%.”

Costs incurred during the first half of 2018 not anticipated initially resulted from workovers on existing CBP horizontals related to iron sulfide buildup, as well as additional infrastructure added to extend an existing oil, gas and water gathering system, management noted.

In addition, the positive results from the first Delaware horizontal require adding infrastructure, which include high pressure flow lines and another disposal well. By adding those improvements between April and June, “the company will be selling gas by the beginning of the fourth quarter 2018,” management said.

The second half 2018 budget has been bumped to $85 million, a $10 million increase. By the end of the year, Ring plans to drill 26 horizontals in the San Andres formation of the CBP, as well as two North Gaines horizontals and two Brushy Canyon horizontals in the Delaware.

Additionally, the increased budget allows for “multiple workovers” on existing San Andres horizontal wells and “extensive infrastructure upgrades and improvements” to maximize the potential in its portfolio.