Permian Basin producer Ring Energy Inc. said Thursday it has begun drilling its first horizontal well in 10 months on the Northwest Shelf leasehold in West Texas, a positive sign in what is proving to be a year of upheaval for the company. 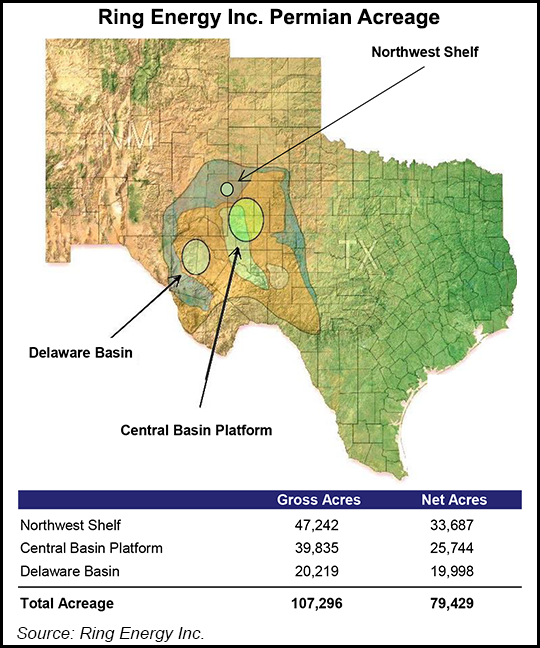 “After drilling the Badger No. 6XH, the drilling rig will move to another horizontal San Andres location currently under construction with plans to drill another well after the new year,” said CEO Paul D. McKinney, who took the helm in September. “These wells will be paid for out of cash surplus currently on hand.

“We have added more to our hedge position for 2021. It is important during volatile markets like these to protect our future cash flows and strengthen our balance sheet. We intend to allocate the majority of our future cash flow to paying down debt with the remainder being invested in capital projects that maintain or improve our daily production and create additional liquidity.”

However, there are concerns by major shareholders about the direction of the Midland, TX-based independent, which was formed in 2012.

McKinney, who also was named chairman three months ago, succeeded longtime CEO Kelly Hoffman, who helped guide Ring through a turbulent period this year. McKinney most recently was CEO of SandRidge Energy Inc., where he worked for 11 months before resigning a year ago.

“While we are very proud of the operating results the company has consistently produced, from an ‘investment’ perspective, we are very discouraged in the current price of our stock and apparent lack of understanding and appreciation for the value this company represents,” co-founder Tim Rochford said at the time McKinney was appointed. Rochford resigned as chairman with McKinney’s ascent, but he remains as an adviser.

One month after McKinney’s appointment, co-founder Stanley McCabe and President David Fowler also resigned. Meanwhile, Thomas Mitchell, John A. Crum and Richard E. Harris in September were appointed to the board.

The turnover has drawn the scrutiny of major investors. Houston-based American Resources Inc. and SK Energy LLC, the investment vehicle of Simon Kukes, said at the start of this month they were “very concerned” with some of the board’s actions.

SK and American Resources now are urging shareholders to “withhold votes on all members” of the board in the upcoming election.

“The Ring Energy board of directors appears to have made a mistake by offering employment to a CEO whose previous performance in similar roles does not instill confidence in his ability to make Ring Energy successful,” the SK and American Resources shareholders said.

McKinney’s “only relevant turnaround experience” was “two failed prior turnaround attempts including less than two years (April 2017 to January 2019) as president and COO of now bankrupt Yuma Energy Inc., and only 11 months (January 2019 to December 2019) as president and CEO of SandRidge Energy, a period which saw its stock price tumble over 50%. “Compounding the problem, the board appears to have agreed to a compensation package that is far above market value for a CEO with his lack of experience producing successful oil and gas companies.”

The SK and American Resources principals said in addition, public records indicate that McKinney “had a prior relationship with some of the board candidates listed in the proxy distributed by Ring Energy. It is possible that such a relationship may lead to conflicts of interest between the board members and the shareholders.”