Ring Energy Inc. has bolted on another 4,700 acres-plus in its core Permian Basin holdings in the Central Basin Platform of West Texas that offset most of its best producing wells. 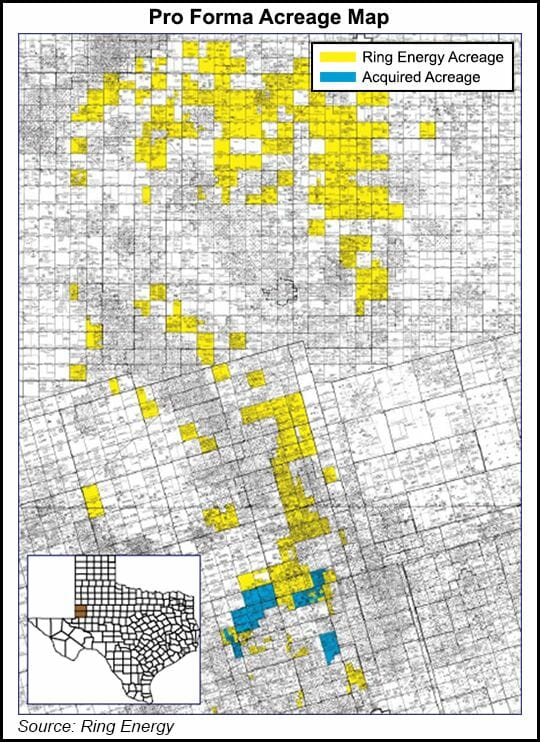 “We have continued to look for acquisitions that will complement our existing properties and be immediately accretive,” Ring CEO Kelly Hoffman said. “We have been working on acquiring the Carlyle property for over six months. This acquisition lies within the sweet spot of our core CBP operations.

“This, along with the additional leases we have acquired, based on the one-rig drilling program previously announced, adds over two years of new drilling locations to our current inventory.”

The acquisition, in combination with the additional smaller surrounding leases the company has acquired, is estimated to add 5,313 net acres and 55 additional gross horizontal drilling locations.

Ring is taking over as operator of the assets, with a 100% working interest and 75% net revenue stake.

“We have chosen to receive consideration in the form of stock as we believe Ring is a best-in-class operator and the assets being transferred are synergistic with Ring’s existing properties that lie just across the lease line,” a Carlyle spokesperson said. “We are fortunate to have found a partner that we admire and trust and look forward to seeing Ring increase its scale and value over time.”

Ring in September increased its 2018 capital budget by nearly 25% to build out infrastructure in the Permian Delaware sub-basin and the CBP to deliver more natural gas and oil to market. Capital expenditures were adjusted to $197 million, a $47 million increase from the initial budget, with the additional spend funded primarily through cash flow.