If the Baker Hughes Inc. rotary rig count for North America during the March 23-27 week drops by 113, the tally of active rigs will be half of what it was a year ago. The count for the week ending March 20 shows a decline of 136 rigs in North America at 1,209 active, and that’s down 983 from one year ago. 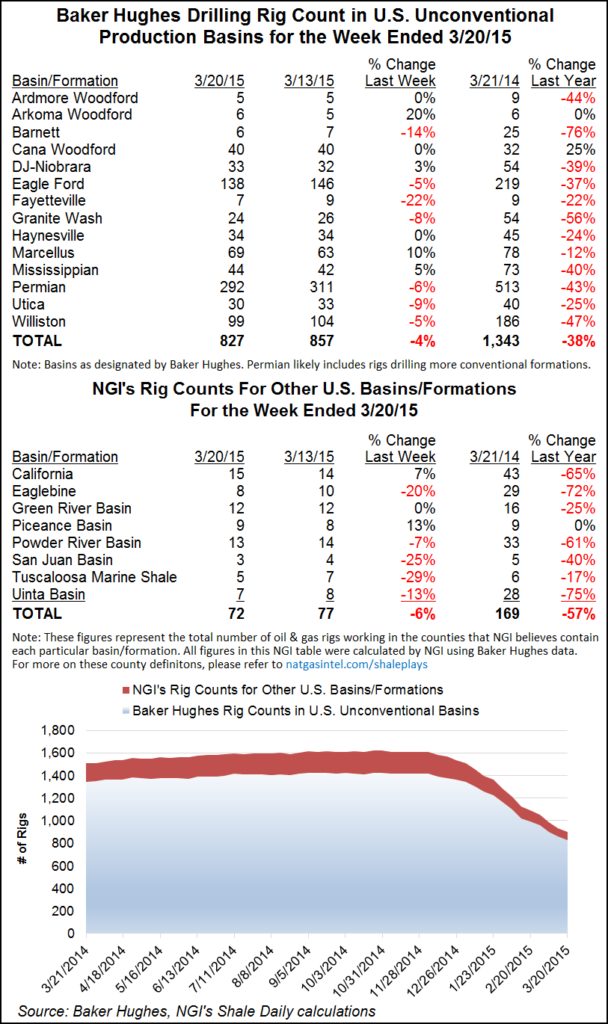 In the United States, rigs drilling for oil saw the greatest decline; the number of gas-directed rigs doesn’t have all that much further to fall on a relative basis.

The biggest losers among producing states were Louisiana, which lost 18 rigs, and Texas, which saw 36 rigs pack it in. The Permian in Texas and New Mexico was the biggest loser among basins, dropping 19 rigs to 292, which is down 221 from a year ago. The Eagle Ford Shale — which is considered to be a less complicated, less costly play in which to operate than the Permian — fared better, losing only eight rigs to 138.

However, on a percentage basis the Fayetteville and Barnett shales saw the biggest declines, losing 22% and 14%, respectively. Producers may feel as if they’re giving their oil away these days, but most natural gas plays are particularly uneconomic and below the breakeven point, according to analysts at Barclays Capital (see Shale Daily, March 12).

Not surprisingly, the Lone Star State was the biggest loser in rig count again for the week, shedding 36 rigs from a week ago and down 393 from a year ago. Neighbor Louisiana was off 18 rigs to 75, which is down 33 from a year ago. Energy workers, particularly those in the patch, have been feeling the pain for a while now. Texas total oil and gas employment declined by about 3,300 jobs in January from an estimated level of 305,000 jobs in December (see Shale Daily, March 13).

The Williston Basin, home to the Bakken Shale, saw a relatively modest drop of 5%, down five rigs from last week to 99%, which is off 47% from a year ago.

The absence of rigs that fell in previous Baker Hughes counts had yet to be felt across the board in terms of production, at least as of last month. Crude oil production fell in the Eagle Ford and Bakken shales but increased in the Permian Basin in February, while natural gas production accelerated in the Haynesville Shale and isn’t projected to slow down through April, according to the latest drilling productivity reports by the U.S. Energy Information Administration (see Shale Daily, March 19).