With only a net of three U.S. drilling rigs leaving play in the latest Baker Hughes Inc. count, could it be that the months-long activity decline is closing in on its bottom? Perhaps, but the count has fallen far enough now to make for shale patch output declines in the second half of the year, analysts said. 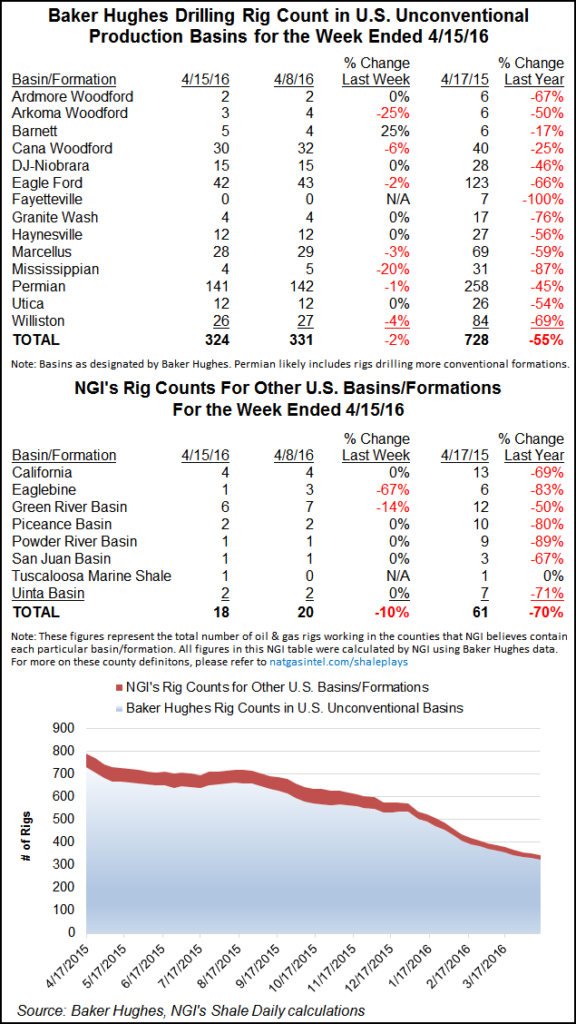 “The sharp drop in the U.S. oil rig count from roughly 700 at the beginning of the year to 460 recently will lead to lower U.S. shale oil (and gas) production over the second half of 2016 and into 2017,” BMO Capital Markets analysts said in an April 11 note. “We expect total U.S. crude oil production to decline roughly 585,000 b/d in 2016E and 464,000 b/d in 2017E…Growth in the U.S. Gulf of Mexico provides a partial offset as multi-year projects come to completion. Total oil and liquids production is expected to be down slightly less due to growth in natural gas liquids production.

“In 2018, we assume somewhat higher activity levels that would translate to modest year-over-year growth by 2019; we estimate that the U.S. oil rig count would need to increase to roughly 600 rigs in order to resume more robust growth in U.S. oil production.”

For the week ending April 15, the U.S. land rig count dropped by five units to end at 409 active. One rig was lost in the inland waters, where three remained active. Three rigs returned to offshore activity, bringing the total there to 28. The U.S. rig count stood at 440 as of Friday after a net decline of three units, Baker Hughes said.

Three oil-directed units left U.S. activity, leaving 351 active. No gas-directed rigs left, so their tally stood at 89 for the week. Six horizontal rigs left, joined by one directional unit and offset by the return of four vertical rigs.

In Canada, three gas-directed rigs left, offset by the return of two oil-directed units for a net decline of one to rest at 40 active Canadian rigs. The North American rig count ended at 480 after a decline of four units for the week.