Rice Energy Inc. unveiled sound prospects in documents filed for an $800 million public offering, shining a light on the small independent’s prime acreage in the Appalachian Basin where it plans to step on the gas in the years ahead, starting with a $1.08 billion capital budget next year. 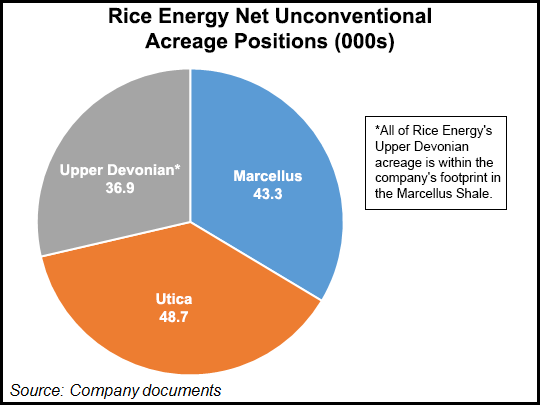 The Canonsburg, PA-based company has been planning an IPO since at least October, enlisting Barclays Capital to underwrite its offering at a time when the market is heating up for onshore operators to go public. Rice’s move comes just months after pure-play Appalachian operator Antero Resources Inc. saw its stock soar in the first day of trading on the New York Stock Exchange (NYSE) (see Shale Daily, Oct. 11).

Rice, another pure-play operator, with acreage in Ohio’s Utica Shale and Pennsylvania’s Marcellus Shale, applied to list its stock on NYSE as well, stopping short of listing its potential share price, or just how many shares it would offer. It filed with the U.S. Securities and Exchange Commission on Monday as an emerging growth company, which will provide for limited public financial reporting.

That also means that the $800 million offering could grow as the initial listing price determines a company’s filing fee. Barclays is expected to offer the Rice stock sometime early next year under the ticker symbol “RICE.” A similar move to file as an emerging growth company was made late last week by American Energy Capital Partners LP — linked to former Chesapeake Energy Corp. co-founder Aubrey McClendon — who has a separate but affiliated company exploring the Utica in Ohio (see Shale Daily, Dec. 16).

Speculation has swirled around what exactly Rice would bring to the table for a public offering. Its acreage position has been estimated to be more than 50,000 acres in the prolific wet gas window of southeast Pennsylvania, and it made a visible move into the core of southeast Ohio in September, where the company holds five horizontal drilling permits in Belmont and Guernsey counties.

Rice’s filing lived up to the billing, with a few red flags that will not likely deter investors from making the offering a worthwhile one. Not surprisingly, Rice is overspending; its prospectus showed that it incurred a $19.3 million loss last year. And while its estimated proved reserves stand at 552 Bcf — consisting entirely of natural gas in the Marcellus — 35% are undeveloped, requiring $304 million of capital to develop over the next five years, by the company’s estimate.

Those reserves, as well as what they include, are likely to go up in both quantity and quality, however. Rice said it did not include its Marcellus joint venture reserves and operating data in its prospectus, as it waits to close a deal that will find it buying-out Alpha Natural Resources 50% stake in a joint drilling program in Greene County, PA for $100 million in cash and another $200 million in stock (see Shale Daily, Dec. 10).

Moreover, the company’s 48,660 net acres in the Utica are just beginning to be explored, with Rice spudding its first well in October and an initial production test expected next month. Buoying the company’s potential in Ohio is a development agreement in which it will share mutual interest with Gulfport Energy Corp. — widely considered a leading Appalachian operator — across 50,000 acres in Belmont County. Rice will retain a 69% interest in that acreage in Goshen and Smith townships and a 43% interest in the acreage located in Wayne and Washington townships.

In its prospectus, Rice said the bulk of its 43,551 net Marcellus acres is located in Washington County, PA, an area of heavy drilling in the southwest part of the state. The company began exploring the formation in 2007, and since drilling its first well in 2010, when it produced 2 MMcf/d, production spiked to 128 MMcf/d at the time of Rice’s public filing, with the number expected to increase by the close of the fourth quarter.

It was during 2Q2013 that the company switched its focus to development of the Marcellus, where it expects to run a four-rig drilling program next year. Thus far, 51 wells have been drilled there, with 37 completed at an average lateral length of 5,669 feet, the company said. Another three wells have been drilled into the Upper Devonian at commercially viable return rates.

In the Utica, Rice said it intends to operate a two-rig program next year, aiming for full development in 2015.

The company’s $1.08 billion capital expenditures budget will be broken down with $299 million going toward drilling and completion in the Marcellus; $132 million for the same in the Utica; $386 million to aggressively acquire additional leasehold and another $263 million for the construction and operation of its own midstream infrastructure.

Currently, Rice owns and operates a gathering pipeline system that can handle up to 1.5 Bcf/d. It has contracted another 110 MMcf/d of capacity on third-party gathering systems and has already secured 354 MMcf/d of long-haul transportation capacity.

Until now, the company — founded by former BlackRock portfolio manager Dan Rice in 2005 and currently run by his three sons — was funded largely by private equity. Texas-based Natural Gas Partners, which manages several energy investment funds, has made $300 million in equity investments in Rice.

As a result, Scott A. Gieselman and Chris G. Carter, managing directors of Natural Gas Partners, will have a seat on Rice’s board of directors, as will an executive of Alpha Natural Resources, when the stock deal closes.

Rice said it intends to use the funds it raises through the public offering to pay down debt with lenders under its revolving credit facility, pay Alpha the $100 million in cash and fund a portion of its 2014 capital budget.