As it nears completion of its Zone 3 Capacity Enhancement Project, the Rockies Express Pipeline has seen its focus shift toward adding more end-user contracts to its portfolio, according to Tallgrass Energy Partners LP’s Doug Walker, vice president of business development. 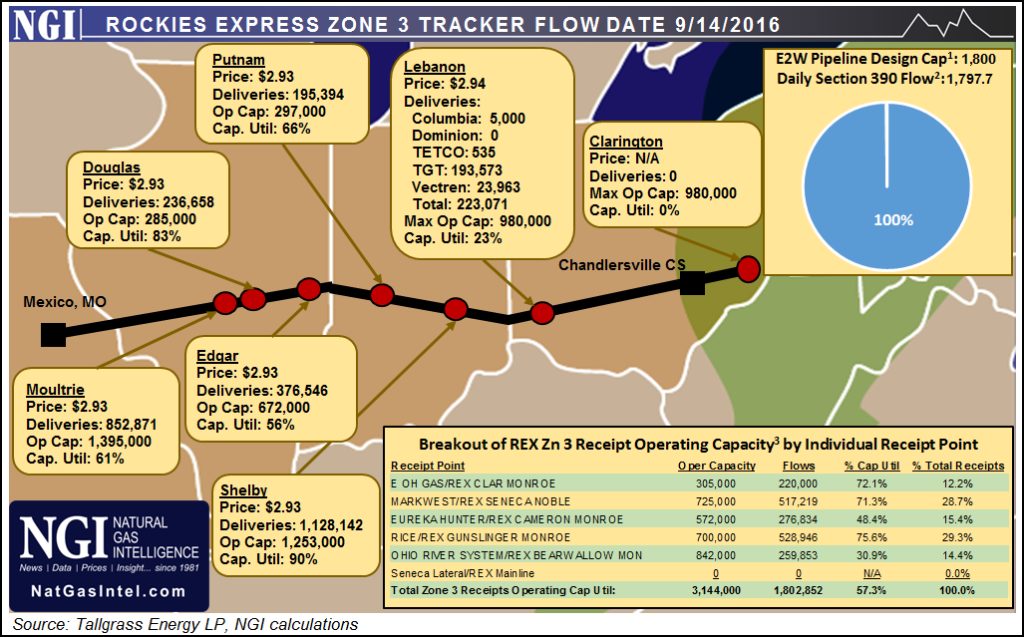 “Supply started to fall in the pipe, if you will, but we started to see a few years ago that we’ve got to find a place to take all this gas, so there’s been a pretty good focus on getting the demand side growing, more direct access to demand,” Walker told attendees Tuesday at the LDC Gas Forums conference in Chicago.

Originally conceived as a west-to-east pipeline to deliver supply from the Rockies to the Northeast, REX pivoted in response to the production growth in the Appalachian Basin in order to offer east-to-west capacity out of Clarington, OH. As of Wednesday’s flows, REX’s currently available 1.8 Bcf/d of east-to-west capacity in Zone 3 was fully spoken for, according to NGI’s daily REX Tracker.

The east-to-west flows on REX are set to increase to 2.6 Bcf/d with the completion of the Capacity Enhancement Project, scheduled to go into service later this year (see Shale Daily, Aug. 4). The expansion was nearly fully subscribed as of Tuesday, with about 50 MMcf/d still on the market of the 800 MMcf/d expansion, according to Walker.

He said a number of the contract commitments for the new east-to-west capacity have come from local distribution companies (LDC), even though REX has been more of a producer-push pipeline in the past.

REX has also received a commitment from Vectren Energy Delivery North, which plans to build a lateral to deliver a contracted 60 MMcf/d to the West Lafayette, IN, area, according to Walker. And the ink had barely had time to dry on a deal signed the day before by Citizens Gas, he said.

“We’re happy to have the LDCs on the system. It changes our perspective on the type of customers” for REX. “Of course, we like producers. We’ve been a supply-first pipeline in both directions, but it’s great to have end-use customers stepping up,” Walker said.

Tallgrass operates and owns a 75% stake in REX through two different affiliates (see Shale Daily, March 30). Walker said the pipeline expects to “see some additional new points coming on” that will eventually see REX reach 4 Bcf/d of capacity to load supply onto the east end of its system. REX currently has about 3 Bcf/d of gathering capacity to serve the 1.8 Bcf/d of east-to-west flows.

“We’ll still only be able to take the 2.6 Bcf/d away [after the capacity enhancement is complete], so that’s a good dynamic,” he said. “It gives flexibility for the shippers to choose which supplies to take.”

But Walker said not to overlook the supply coming out of the Rockies and flowing into the Midwest on REX.

As the initial 10-year contracts expire in 2019, the pipeline is working on rolling some contracts over and pushing others forward, while adding new ones out of the east end of the pipe, Walker said.

“When REX was part of the assets sale from Kinder [Morgan Inc.], the big question was what happens in that 2019 cliff, where all the revenues come off?…Tallgrass’s view is we’ll solve that with connecting supplies from the east…and now we’re starting to work on getting new supplies from the west. We’ll be able to smooth the forward look on the revenue stream.”

“If you add up the new points, and all these are either under construction or at least proposed in Spire’s case, over 1 bcf/d of new interconnectivity is coming to REX, so that’ll take us from 800 MMcf/d up to 1.8 Bcf/d,” he said. “We’re not done, we’re talking to a lot of power plant developers across the system. We’re looking at things that might take REX further west, beyond Zone 3, so there’s a lot of things on the horizon, but these are locked and loaded.”