Rex Energy Inc. is planning to begin site development late next week at a controversial location near a large school campus in western Pennsylvania. The company has been met with staunch opposition from a group of parents concerned about the health and safety of students. 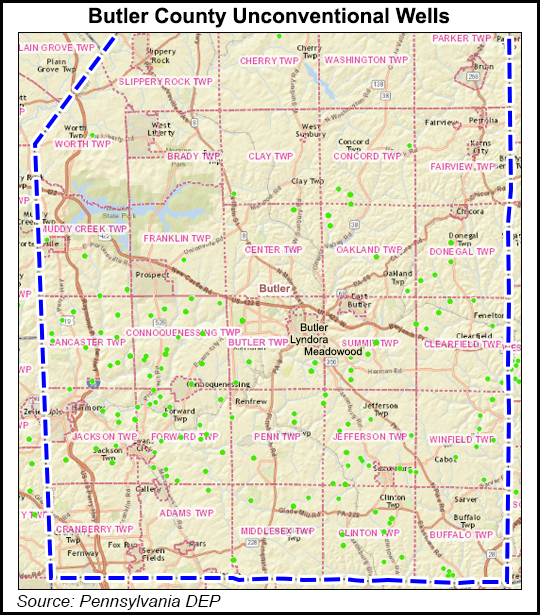 The standoff began in March when Rex attempted to lease the mineral rights underneath Mars Area School District property, where more than 3,200 students in grades K-12 attend school. The school directors refused to lease the land, prompting a group of parents to band together to research horizontal hydraulic fracturing. They later asked township officials in nearby Adams and Middlesex to establish a ban on drilling within two miles of the school, which was rejected.

The area to be developed, roughly 25 miles north of Pittsburgh, is in Butler County, home to the bulk of Rex’s leasehold, in an area that has led to steady production gains in recent quarters (see Shale Daily, July 29; March 28; Jan. 16). Based in State College, PA, of all Rex’s 314,000 net acres in the Appalachian Basin, 269,200 net acres are in Butler County, according to the company’s latest investor presentation.

“From the start of the permitting process and as the process progressed, Rex Energy confirmed that we will communicate with local stakeholders, consider site-specific enhancements and keep the Mars Area School District and local first responders informed of our well development plans for our Geyer Farm well pad,” the company said.

Last Friday, Rex received a permit from the Pennsylvania Department of Environmental Protection (DEP) to drill five horizontal Marcellus Shale wells in Middlesex at the site in question, which Rex spokesman Patrick Creighton said is about two-thirds of a mile from the school campus.

“There are a number of factors that go into these kinds of decisions, from leasehold to geology, geography and infrastructure,” Creighton told NGI’s Shale Daily when asked if it might have been easier to stake the wells farther from the school property. “This site was deemed most conducive for responsibly developing the acreage in that area.”

The Mars Parent Group, though, isn’t buying what Rex has to say about responsible development. They’ve enlisted attorney Jordan Yeager to work on their behalf and have continued to raise money to fight Rex’s plan. Yeager, who represented townships in last year’s landmark state Supreme Court ruling that found justices striking down parts of Act 13 and returning to municipalities their right to change or enforce local zoning laws (see Shale Daily, Dec. 20, 2013), could not be reached to comment. But despite the DEP’s permit, the group has vowed to continue fighting, with members recently telling local news media that they are organizing to determine their next move.

“The Mars Parent Group is made up of many folks with different ideas and thoughts, and what binds us together as a group is our concern for the health and safety of our children,” they wrote to McDonough. “This has been our message from the beginning and continues.

“Before ever bringing unconventional natural gas extraction close to where people go to school, play, work and live, there should have been studies showing there are no harmful effects to people’s health,” the letter continued. “The onus of proof lies on those who profit from the activity.”

In a letter to the group, the DEP said it had no legal right to deny Rex’s permit for the site. Regulations provide for a 500-foot setback from schools. Creighton said Rex operates two other pads, with three wells each, near two other schools in Butler County that are currently in production.

In response to local concerns, Rex plans to construct sound abatement walls, use green-completion techniques, and it has agreed not to flare gas at the site, he added.

It remains unclear what the parents group plans to do next, but a recent decision in northeast Pennsylvania found a common pleas court judge throwing out a conditional-use permit issued to an operator by a municipality there (see Shale Daily, Sept. 4). In his decision the judge cited the Act 13 ruling and local concerns said to have been overlooked.

Middlesex officials recently modified the township’s zoning laws to accommodate drilling in residential-agricultural zones, in a move similar to factors in the northeast Pennsylvania case. Creighton said access roads and pad development at the site near the school would take between four and six weeks to complete.