Resolute Energy Corp., which has turned its operational focus to the Permian Basin, has agreed to take up to $195 million for a package of Paradox Basin prospects in the Aneth field of southeastern Utah. 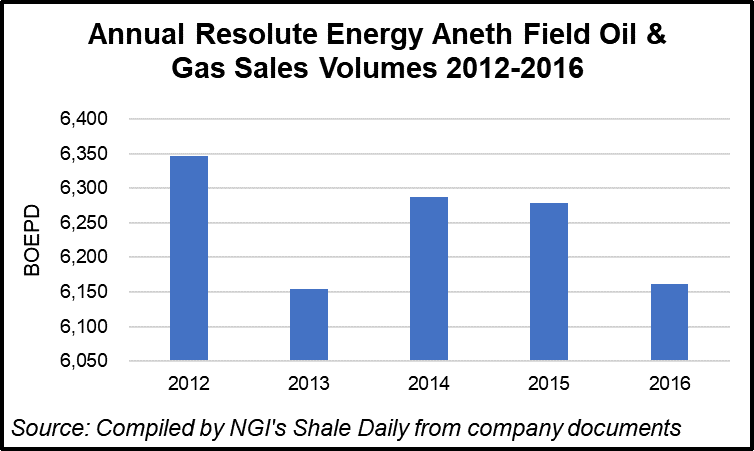 The Denver-based producer agreed to sell the field to Elk Petroleum Ltd. for $160 million outright and would recoup up to $35 million more if oil prices exceed “certain levels” over the next three years.

The deal would sharpen Resolute’s attention on the Permian’s Delaware sub-basin.

“This sale is the final step in our previously announced strategy to transform Resolute into a pure-play Delaware Basin company,” CEO Rick Betz said. “Closing this transaction will significantly improve our cost structure, strengthen our balance sheet and position the company to accelerate the development of our prolific Delaware Basin property and continue our strong growth profile.”

Resolute’s second quarter lease operating expense (LOE) for the Permian was $4.87/boe, “which will approximate our company LOE after completion of the transaction,” Betz said.

Proceeds from the Aneth sale would be used to repay an outstanding balance under a revolving credit facility, estimated at $130-135 million at the end of September.

Resolute’s Aneth-dedicated workforce is expected to transition to Elk, a Rockies-focused producer headquartered in Australia.

The Aneth field, discovered in 1956, has produced to date close to 448 million bbl of oil. In 1985, an ExxonMobil Corp. predecessor, as the operator of McElmo Creek Unit, initiated a successful EOR project that is still in operation.

The staff transition to Elkwould allow Resolute to reduce future cash general and administrative expenses by about $6 million and stock-based compensation by about $3 million annually, Betz said.

Under the terms of the definitive agreement, Elk agreed to fund a “performance deposit” of $10 million creditable against the purchase price. The contingent provisions of the agreement would require Elk to pay Resolute:

The transaction is subject to customary closing conditions and purchase price adjustments.

Petrie Partners, LLC and Barclays Capital Inc. acted as financial advisers to Resolute, and it was represented by Arnold & Porter Kaye Scholer LLP.