Search and rescue efforts were continuing offshore Louisiana late Wednesday for 12 people who were missing after a commercial liftboat with a crew of 19 capsized. 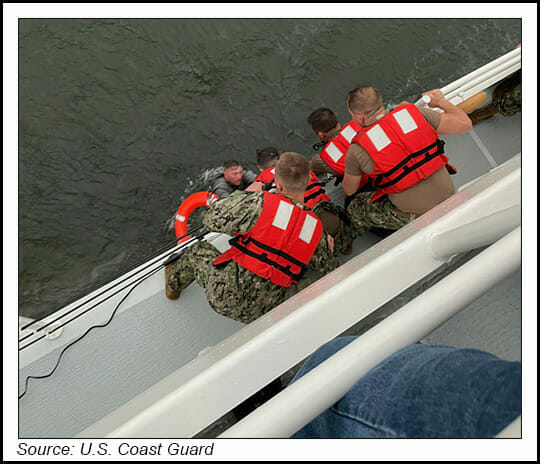 As of midday Wednesday, six people had been rescued, with one person confirmed dead after a Seacor Power liftboat, with a beam of 129 feet, capsized about 4:30 p.m. CT Tuesday.

The vessel capsized during an unusual weather event in which winds gusted by 80-90 mph and waves crested as high as nine feet, according to the U.S. Coast Guard (USCG). Capt. Will E. Watson, sector commander in New Orleans, discussed the rescue efforts during a press conference on Wednesday.

“What we know is that weather conditions at the time…80-90 mph winds, would be challenging under any circumstances,” Watson said. “We did have some weather reports” about “some challenging weather, but this level of weather was not anticipated.”

Watson could not confirm what the liftboat was hauling or its mission pending an investigation. The USCG remained optimistic about the search and rescue mission, he told reporters. He noted that Gulf water temperatures were in the 70s.

“Whenever we engage in a search and rescue effort, we are hopeful,” Watson said. “You cannot do this work if you are not optimistic…when you do it. We remain hopeful.”

After the incident occurred on Tuesday, the USCG worked with “good Samaritan vessels” to rescue six people from the liftboat owned by Seacor Marine. The USCG said watchstanders received an emergency position Tuesday around 4:30 p.m. indicating a “radio beacon notification of a distressed 129-foot commercial lift vessel. The watchstanders issued an urgent marine information broadcast, which multiple good Samaritan boat crews responded to.”

According to MarineTraffic.com, a weather station at Grand Isle, LA, showed “peak sustained wind of 58 mph” around the time the vessel capsized, with gusts to 85 mph. Winds were strong enough to produce a two foot-plus storm surge. A USCG spokesperson described the weather event as a microburst.

The National Weather Service said a microburst is a “localized column of sinking air (downdraft) within a thunderstorm and is usually less than or equal to 2.5 miles in diameter.” Microbursts “in some instances can be life-threatening.” Wind speeds in microbursts may reach higher than 100 mph.

After receiving the emergency notification, the USCG said the crew of the pre-commissioned 154-foot Cutter Glenn Harris “arrived on scene within 30 minutes and rescued one person from the capsized vessel. A 45-foot Response Boat-Medium boat crew from Coast Guard Station Grand Isle rescued another person and good Samaritan vessels on scene rescued four other people from the water.”

Seacor Marine has a global fleet of offshore supply, towing and speciality vessels. It said it was cooperating with the rescue efforts.

Seacor’s liftboats are equipped for extended offshore operations. They are built with 50 berths to provide room for 12 crew members. The liftboats, with up to two cranes, are able to house 36 passengers.

Liftboats in general are designed with open decks to ferry equipment and supplies to support offshore construction or for exploration and production activities. Aptly named, they are able to mechanically raise their hulls clear of water on tension legs to provide a stable platform for work.