A deadly heat wave that smothered Western Canada and the U.S. Pacific Northwest drove massive gains for spot gas prices in those regions early in the June 30-July 2 period. Hot weather also hit the East Coast for part of that time, lifting NGI’s Weekly Spot Gas National Avg. by an impressive 30.5 cents to $3.465. 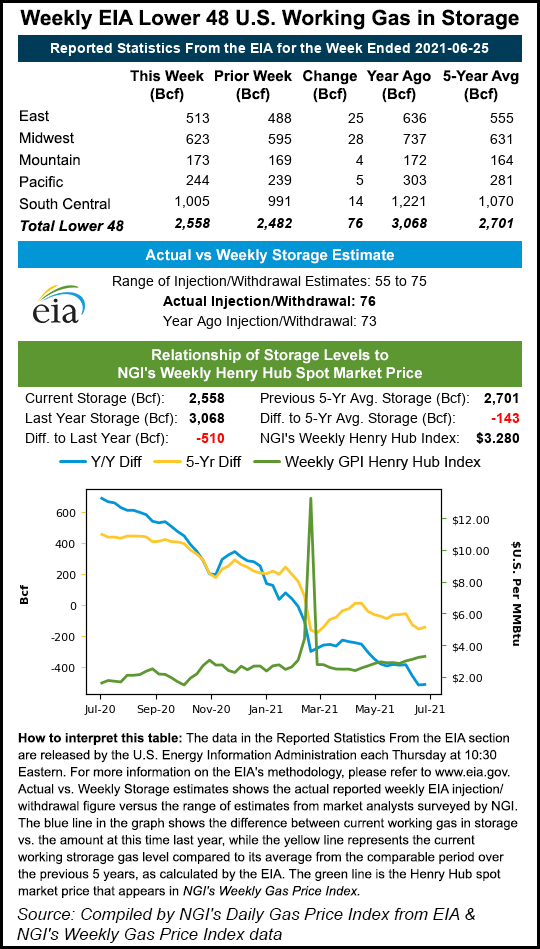 Not to be outdone, Nymex futures experienced some of the most extreme volatility in recent months. In addition to the oppressive heat, a major production decline in the Northeast added to the momentum. After nine consecutive days on the positive side of the ledger, the August Nymex futures contract settled Friday at $3.700.

As for the heatwave, multiple cities throughout Western Canada and the U.S. Pacific Northwest shattered temperature records as the mercury soared.

In British Columbia (BC), temperatures on June 29 hit 121 degrees in Lytton, breaking back-to-back records. A day later, wildfires began spreading and by Thursday, local officials said more than 90% of the small town of 250 or so residents had burned.

The fire that engulfed Lytton was only one of more than 70 wildfires still burning across the province. By Friday morning, the number of active wildfires in BC had jumped to more than 110.

BC’s chief coroner said 486 reports of “sudden and unexpected” deaths came in between June 25 and 30. The province normally sees 165 deaths in five days. The situation was equally as dire in the United States. Dozens of deaths had been reported in Oregon and Washington.

As for the toll the blistering heat took on the energy industry, the impacts were widespread.

Aegis Hedging Solutions said several compressor stations in Western Canada were offline for periods of time because of the extreme heat. The unplanned compressor outages began in the final weekend of last month (June 26-27) and resulted in a decline in field receipts.

Meanwhile, New York utility ConEdison Inc. reduced voltage by 8% to some neighborhoods in Queens while crews worked to repair equipment amid the intense heat. The voltage reduction affected about 64,000 customers.

The record temperatures also made for exceedingly high natural gas demand, especially in light of the record low water levels in the western U.S. reservoirs that were threatening hydroelectric power.

Gas demand in the Pacific Northwest, for example, spiked to 1.89 Bcf/d on June 29, Wood Mackenzie data showed. This compared with the recent 30-day average of 1.62 Bcf/d and last year’s 1.09 Bcf/d average for the same 30-day period.

However, power burns were forecast to drop to 1.70 Bcf/d by Friday and then average only around 1.15 Bcf/d average for the first full week of July, according to Wood Mackenzie.

The earlier hot weather on the East Coast also boosted prices there.

Algonquin Citygate experienced the typical volatility it sees anytime demand surges, with cash prices averaging $3.275 during the June 30-July 2 period, which is 41.5 cents higher than during the previous week. Transco zone 6 non-NY climbed 36.5 cents to $3.035.

Though this week’s temperatures resembled levels normally seen in August, news of an unplanned drop in production in the Northeast fueled further momentum for Nymex futures.

In addition to the MarkWest outages, South Central production also declined, according to EBW. Lower Canadian imports because of ongoing heat and the continued reduction in flows on Texas Eastern Transmission’s 30-inch diameter line also wreaked havoc on the market this week.

“With production in the Northeast running more than 3.5 Bcf/d below previous levels, the near-term price trajectory for natural gas depends heavily on the duration of the outages,” EBW said.

If MarkWest is able to restore service on the pipeline and restart its processing plants quickly, gas prices are likely to retreat, according to the firm. “With several Bcf/d of production being lost daily, however, an extended shutdown could fundamentally change the tenor of the market, with prices quickly racing higher.”

Tudor, Pickering, Holt & Co. (TPH) is more guarded in its price outlook. The firm said the recent rally has driven Nymex Henry Hub prices swiftly past its prior target of $3.25 for the third quarter of 2021 and above $3.50 for the winter. It noted that the Calendar 2022 strip has strengthened to around $3.20 as well.

“We continue to see upside to the 2022 curve toward the $3.25-$3.50 range to balance the market via power generation demand destruction, with a tight global gas market continuing to support near full liquefied natural gas exports into the second half of 2022,” said the TPH team.

That said, for now, the firm’s analysts see limited upside to the 2H2021 Nymex curve based on normal weather following the recent run. They see both associated and dry gas supply likely accelerating through the end of the year on a combination of private exploration and production and Haynesville Shale activity.

If it weren’t for the TCO issue, this week’s government storage data may have had more of an impact on the gas market.

The Energy Information Administration (EIA) reported a much larger-than-expected 76 Bcf injection for the week ending June 25. Ahead of Thursday’s report, analysts had pegged the build in the upper 60s Bcf range.

The EIA figure was 3 Bcf above last year’s build for the similar period and 11 BCf above the five-year average.

Mobius Risk Group said the latest EIA storage data was not nearly as supportive as most of the data points in the 2021 injection season on a weather-adjusted basis. But the market quickly turned its attention to the potential for a sub-30 Bcf build in the next EIA report.

“The push and pull of a hot middle-third of July temperature forecast and a sequentially bearish weather week compounded by a holiday weekend (lost industrial demand and power load) underpins continued volatility at the front of the curve, as well as the spot market,” Mobius said.

In the near term, the firm opined that the market would be focused on July inventory data points. Specifically, the market would be looking for signs that either pre-winter inventory will be grossly inadequate, or that the 3.6 Tcf barrier can be crossed, “causing the proverbial can to be kicked down the road.”

From April through June, the cumulative storage build was about 100 Bcf slower than the five-year average pace, according to Mobius. When extrapolating such a trend through the end of October, pre-winter inventory would reach only 3.43 Tcf.

“This is much lower than many market participants predicted back in early to late March,” Mobius said.

Although a hot June certainly contributed to the negative delta versus market predictions, the firm pointed out how the June weather theoretically should have been offset by higher prices. “If there was a consensus misconception when looking back over the first three months of the injection season, it was that year/year power demand would be significantly weak year/year.”

Over the next three months, power sector demand, along with potential temporary disruptions to LNG demand because of tropical activity will likely be the driving force of directional changes at the front of the curve, according to Mobius. “Understanding how intricacies such as plant outages, rainfall and renewables impact power demand are critical to assess risk reward for the balance of injection season, and what that translates to for price expectations.”

The long holiday weekend sent spot gas prices down a few notches on Friday, which traded for gas delivery through Tuesday, July 6.

Cooler weather also was expected in parts of the country, driving small losses across the county’s midsection, throughout the Rockies and in California.

Losses throughout the Midwest and Midcontinent were in the single-digits, while several locations in Texas posted sharper declines ahead of a soggy holiday weekend. Katy dropped 11.0 cents to $3.500 for the four-day trading period. Waha was down 12.0 cents to $3.350.

East Coast markets, meanwhile, staged a rebound on Friday. Although the region was in store for some cooler weather to celebrate the Fourth of July, NatGasWeather said hot weather was set to return quickly.

Temperatures were forecast to climb back into the 80s to lower 90s across the East, boosting demand. The steamy outlook sent Algonquin Citygate cash up 12.5 cents to $2.885 for the four-day gas period.